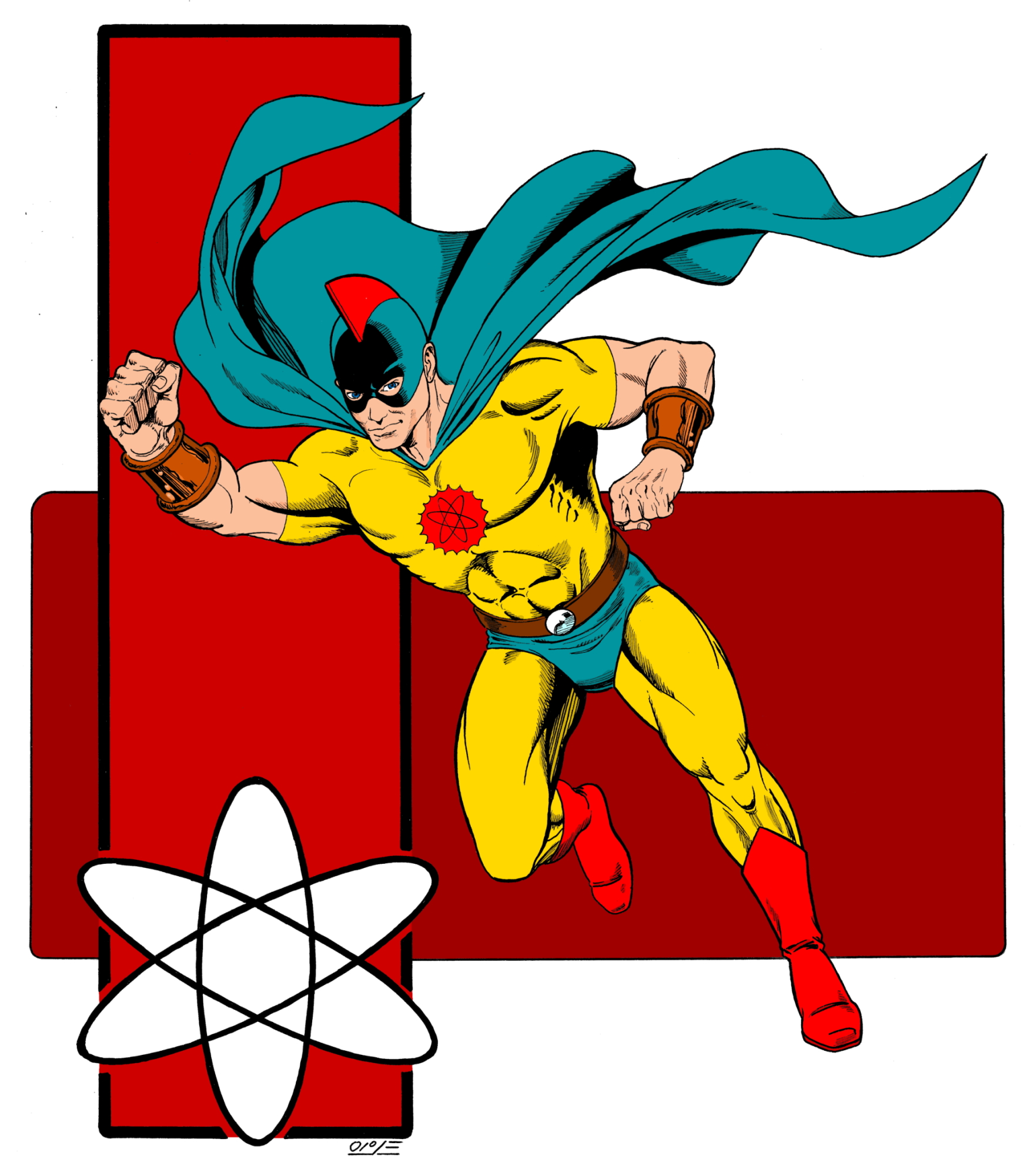 Al Pratt was probably born around 1920; nothing is known of his family or early life. Pratt was a sophomore at Calvin College in 1940 and suffered the indignity of stunted growth, being a mere 5'1" tall. Ever the target of harassment, Pratt was often referred to as "Atom Al" by his tormentors. During those college days, he had a crush on a local debutante, Mary James. In early 1940, Pratt happened upon Mary James on a street corner in Calvin City and struck up a casual conversation. While trying to negotiate a date for the prom, the couple was accosted by a mugger who trampled the diminutive Pratt and absconded with James's purse and jewelry. James belittled Pratt's weakness in the fray, humiliating him. Dejected, Pratt made his way home and was approached by a panhandler. Feeling sympathetic, Pratt bought dinner for the old beggar. In the course of conversation, it was revealed that the beggar was Joe Morgan, a former heavyweight boxer and trainer. Pratt shared the events of earlier in the evening with Morgan and told of how he craved greater strength and fighting ability. Morgan seized on the youth's obsession by offering his services as a trainer. Pratt had inherited some property from a deceased uncle, so he provided Morgan with housing in exchange for his services as trainer. Using weekends and study breaks, Pratt trained intensively with Morgan. 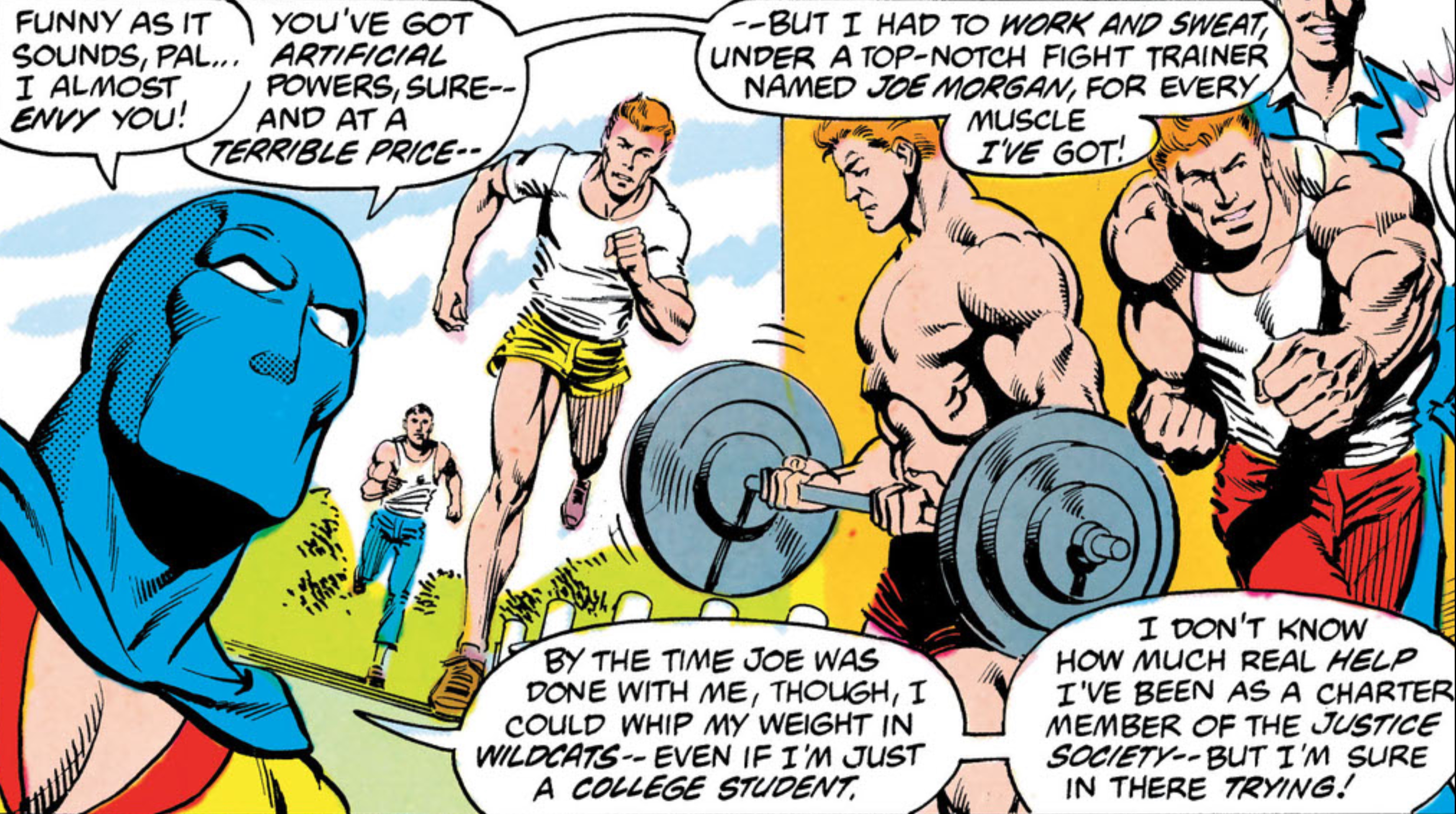 In a few months' time, Morgan decided the training was complete, and the two moved back to Calvin City. Morgan even provided Pratt with a calling card that said "The Atom," in reference to the word's former meaning of "small" and its new meaning of "powerful." Upon his and Morgan's return to Calvin City, Pratt determined to pay a call on Mary James. When he arrived near her home, he witnessed her abduction by a group of criminals and leapt onto the rear of their departing automobile. Mary James had been kidnapped for ransom, and upon hearing the terms, Pratt leapt through a nearby window and thrashed the criminals. As James was blindfolded, she had no clue as to the identity of her savior. Before departing, Pratt dropped one his calling cards as "The Atom" (All-American Comics #19). Later, Mary James was attending a debutante ball and Pratt made sure to attend. When the party was crashed by some would-be jewel thieves, Pratt slipped out and donned a new costume he had made for himself. After thwarting the thieves, he announced himself to James and departed (All-American Comics #20). For several months thereafter, Pratt lived with Morgan. The two later parted ways and Morgan moved to a rural area outside of Calvin City to start a health camp, a popular recreational retreat in the 1940s (revealed in All-American Comics #30). The camp apparently fell on hard times, as Pratt lost track of Morgan shortly thereafter.

Within a few weeks of donning a costume, the Atom was selected by Doctor Fate to aid in the struggle against Valkyries summoned by Adolph Hitler's use of the Spear of Destiny. This case led to the formation of the Justice Society of America, and the Atom was a charter member (DC Special #29). The Atom went on to become a member in good standing for the World War II duration of the JSA and was a charter member of the All-Star Squadron (All-Star Squadron #3).

For roughly a year after meeting Mary James at Calvin College, Pratt wooed the wealthy debutante. The vain girl cared little for Pratt with his smallish frame and homespun upbringing, latching on to more glamorous men such as star football player "Truck" Tarbell. The popular Tarbell, the son of a freight magnate once aided by the Atom (All-American Comics #22), was a popular figure around campus as well as ring leader of a gang of guys who routinely harassed Pratt. The appearance of the Atom was a source of great thrill to James, who considered the masked hero an unattainable treasure. As time passed however, James softened toward Pratt, and eventually consented to a date. To Pratt's chagrin, their first date was disrupted by a run-in with some fur hijackers, further infatuating James with the Atom rather than Pratt (All-American Comics #28). 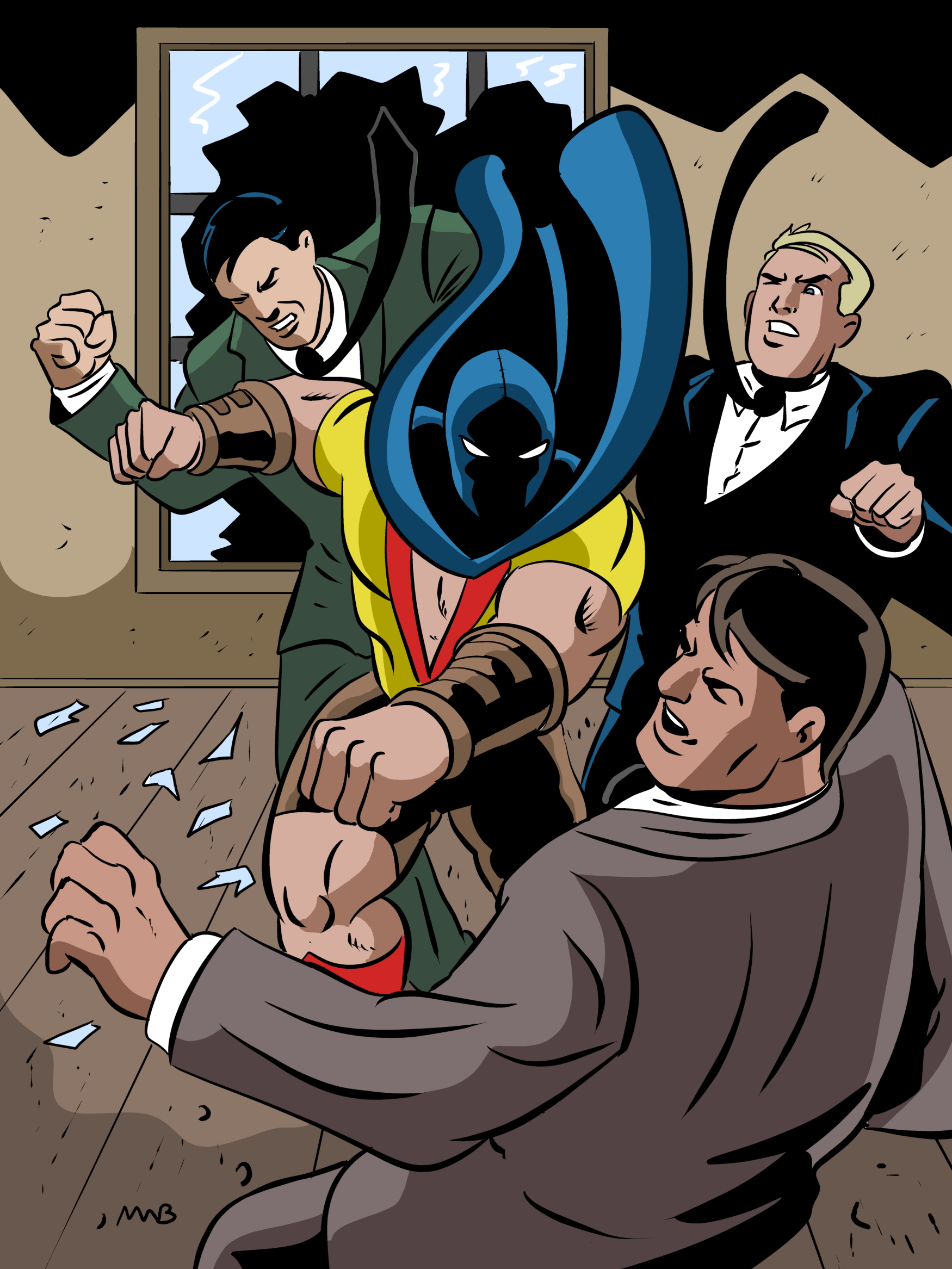 In the summer of 1941, the Justice Society was involved in a plot to disturb the fabric of American history by executing eight individuals destined to occupy the White House over the next five decades. Ian Karkull, an enemy of Doctor Fate, was behind the plot and after a  lengthy battle with a collection of his assembled super-villain henchmen, was ultimately defeated. As Karkull was destroyed, chronal energy accumulated in Karkull's body was passed onto the JSA, imbuing them with increased longevity and heightened vitality. The Atom was among those to receive this boon. While many of the JSA's loved ones were also there, Mary James was not (All-Star Squadron Annual #3). Shortly after the bombing of Pearl Harbor, most of the JSA members enlisted in the armed forces in their civilian identities (All-Star Comics vol. 1 #11). Al Pratt joined the Army and was trained as a tank corpsman in Virginia (All-Star Squadron vol. 1 #13). In time, however, the government decided against having the heroes abandon their costumed identities and the Atom returned to active service as a "mystery-man."

In the early months of 1942, The Atom again encountered Joe Morgan. Evil magic concentrated and expelled by the Guardians of the Universe had encountered a embittered Joe Morgan and seized upon him as a vessel for its will. Morgan had trained Ted Grant (Wildcat) and Jim Harper (The Guardian), as well as Pratt, only to see the three abandon any hopes he had for greatness in the boxing ring. The magic empowered Joe to act out a subconscious vengeance against the three, but ultimately he was defeated by the three heroes and their All-Star Squadron colleagues. As the magic fled his body, Morgan died, asking forgiveness for the selfishness he exhibited from the heroes he had trained (All-Star Squadron Annual #1).

Later that same year, the Ultra-Humanite began a campaign to extort the U.S. government and take revenge on Superman, his original adversary, using three sources of power: the alien Powerstone, the hammer of Thor, and the body of Robotman. To assist him, the Ultra-Humanite kidnapped physicist Terrence "Terry" Curtis (nee Kurtzburger), a conscientious man who cooperated out of fear for the safety of his infant daughter, Terri. Both Curtises suffered from intense radiation exposure due to experiments with radioactive thorium. As the Ultra-Humanite's scheme began to crumble under the onslaught of the All-Star Squadron, Curtis (now the costumed Cyclotron, due to the powers he had acquired upon thorium exposure) rebelled and pursued his former captor. The Atom's attempt to stop the perceived flight of Cyclotron resulted in a fist fight with the former scientist. During the fight, Cyclotron exposed the Atom to the thorium radiation building in his body, disabling the hero and returned to the pursuit. In an attempt to slay the Ultra-Humanite, Curtis's body was destroyed and Terri Curtis was left an orphan. Danette Reilly (Firebrand), Curtis's former lover, adopted the infant, and Pratt declared himself willing to help (All-Star Squadron Annual #2).

The Atom again returned to Calvin College and spent the remainder of the war years as an active member of the Justice Society. What his courses of study were is unknown. It is known that, as an adult, he lectured in physical sciences at Calvin College (The Atom #36), but he also had aspirations to journalism and tried in multiple years to get a job as a summer reporter at various newspapers (All-American Comics #46, 71). It most likely that Pratt ended up with a very general education that accounts for his lack of a very clear career in later life.

In 1948, the Atom had an encounter with the Huntress, an adversary of Wildcat's, as part of a JSA case. During this case, he exhibited remarkable strength, which was later shown to be due to the thorium exposure years earlier (All-Star Comics vol. 1 #41). Pratt later redesigned his costume to reflect these new powers, deriving it from Terry Curtis's original cyclotron uniform (Flash Comics #98). The Atom was an active member of the JSA during its final Golden Age case in 1951. Along with the six other active members, he was summoned before the HUAC and instructed to reveal his identity to the panel. They declined and the Atom retired from active duty (Adventure Comics #466). 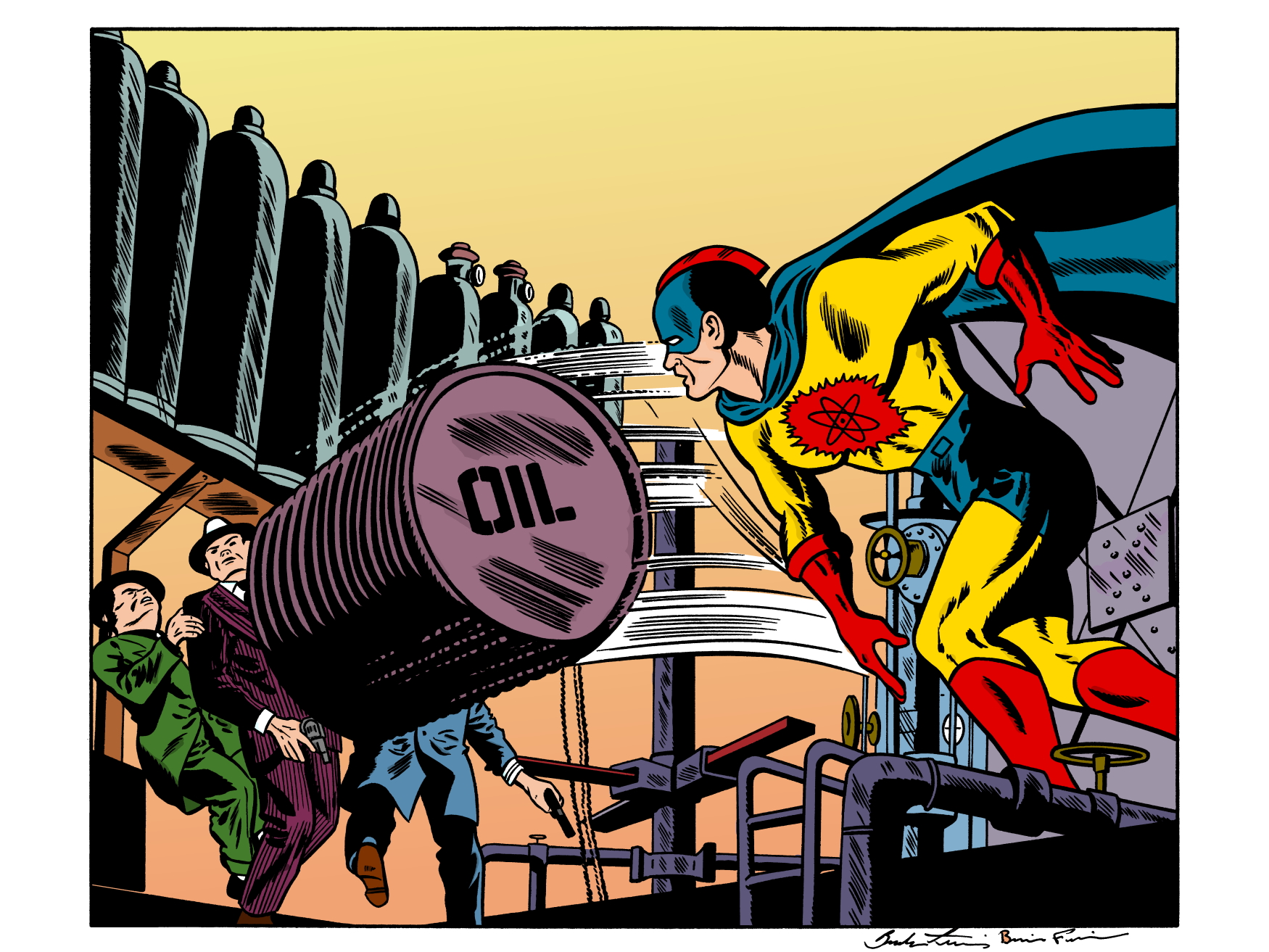 The Atom's activities during the intervening years are unknown. Presumably he finished graduate school and had become a lecturer in physical sciences at Calvin College (The Atom #29). Most likely his research activities, if any, were minor. It is known that he ultimately wed Mary James, but is also known that he was a bachelor in 1965 (The Atom #36), implying that he had not yet married or that the marriage had in some way ended. It can probably be safely assumed however that his wife of later years (DC Comics Presents #30) was in fact, the former Mary James.

When the JSA was captured by Vandal Savage, the Atom again returned to active service (The Flash vol. 1 #137). When the JSA had its first encounter with the Justice League of America, the Atom made the acquaintance of Ray Palmer, the Atom of Earth-One (Justice League of America #21-22). The two made contact on a number of occasions, including the apprehension of the Thinker, an Earth-Two criminal working on Earth-1One (The Atom #29).

During the 1970s and 80s, the Atom entered a phase of semi-retirement, making few public appearances. He invested heavily in his godson, Albert Rothstein, spending a summer physically training him (Infinity Inc. #48). He answered the call to defeat the Master Summoner in 1978 (All-Star Comics vol. 1 #74) and responded to a summons from Superman that led to the riverbed of Koehaha, the Stream of Ruthlessness, wherein he and his fellow JSA members were "drowned." After a battle with Infinity Incorporated, including his godson Nuklon, the Atom was restored to normal (Infinity Inc. #1-10). The Atom stood with the rest of the Justice Society during the congressional hearings on the "Batman Diaries" (America vs. the Justice Society #1-4) and fought the minions of the Anti-Monitor during the Crisis on Infinite Earths.  At the end of the Crisis, Earth-Two lost contact with most of the remaining multiverses.  Atom, one of the JSA's younger members, was still an active member in the earl 21st century and participated in a case when a breach occurred between Earth-Two and Earth 0 (Justice Society of America Annual #1). His current status is unknown. 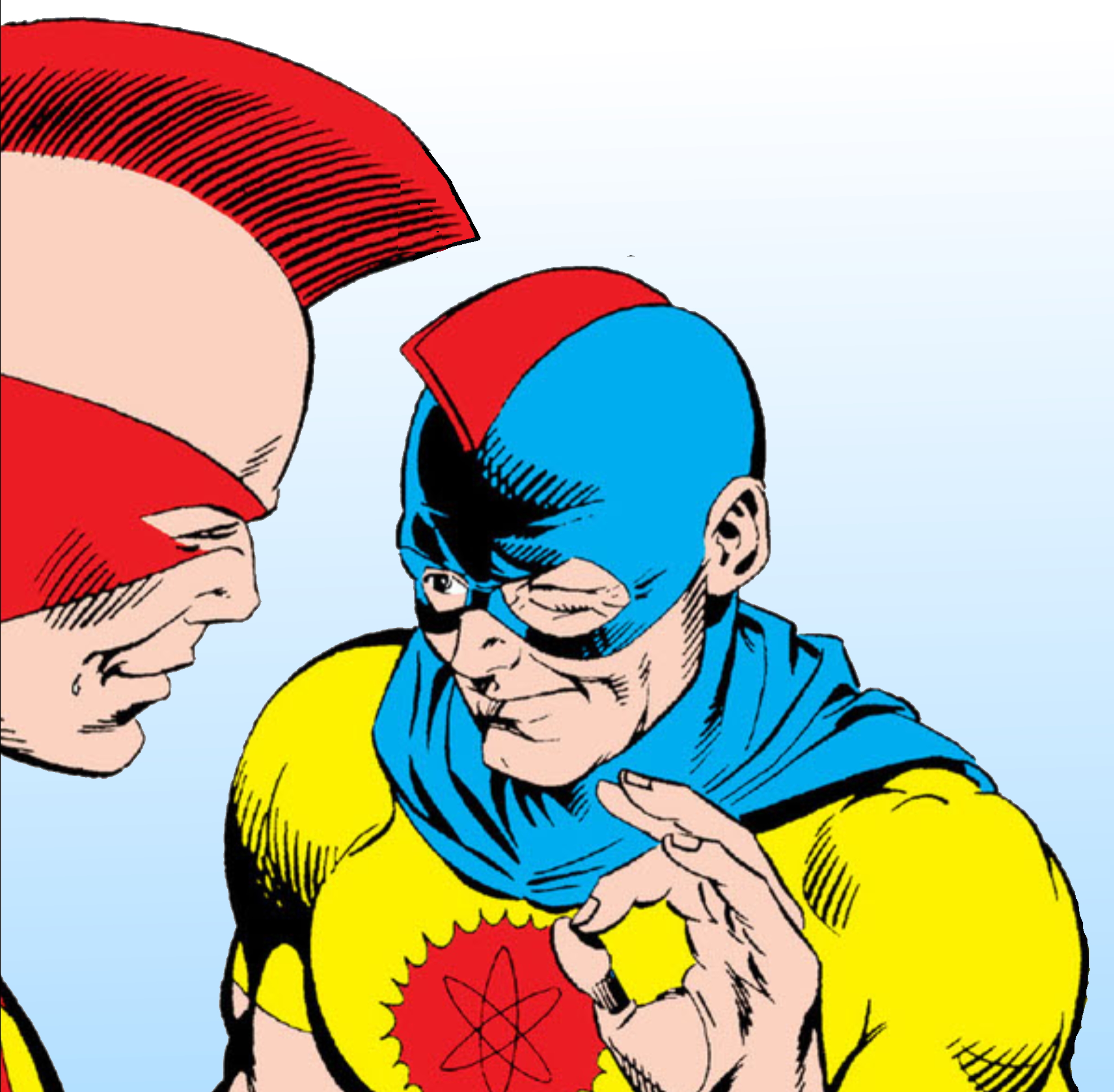 The Atom's abilities were a combination of his intensive training under Boxer Joe Morgan and exposure to a dose of cyclotronic radiation in 1942. In 1948, Pratt developed limited super-strength as a result of the radiation exposure several years earlier.  He participated in cases with Ian Karkull (All-Star Squadron Annual #3) and Professor Zodiak (All-Star Comics #42) in which he was exposed to potent rejuvenating forces that have likely slowed his rate of aging. Somewhat paradoxically, his abilities have gotten stronger, rather than lessened, with age.

The Atom's weaknesses, like those of many other JSA members, stemmed from his humanity. He could be slain by sufficient forces that broke through his heightened physical characteristics. 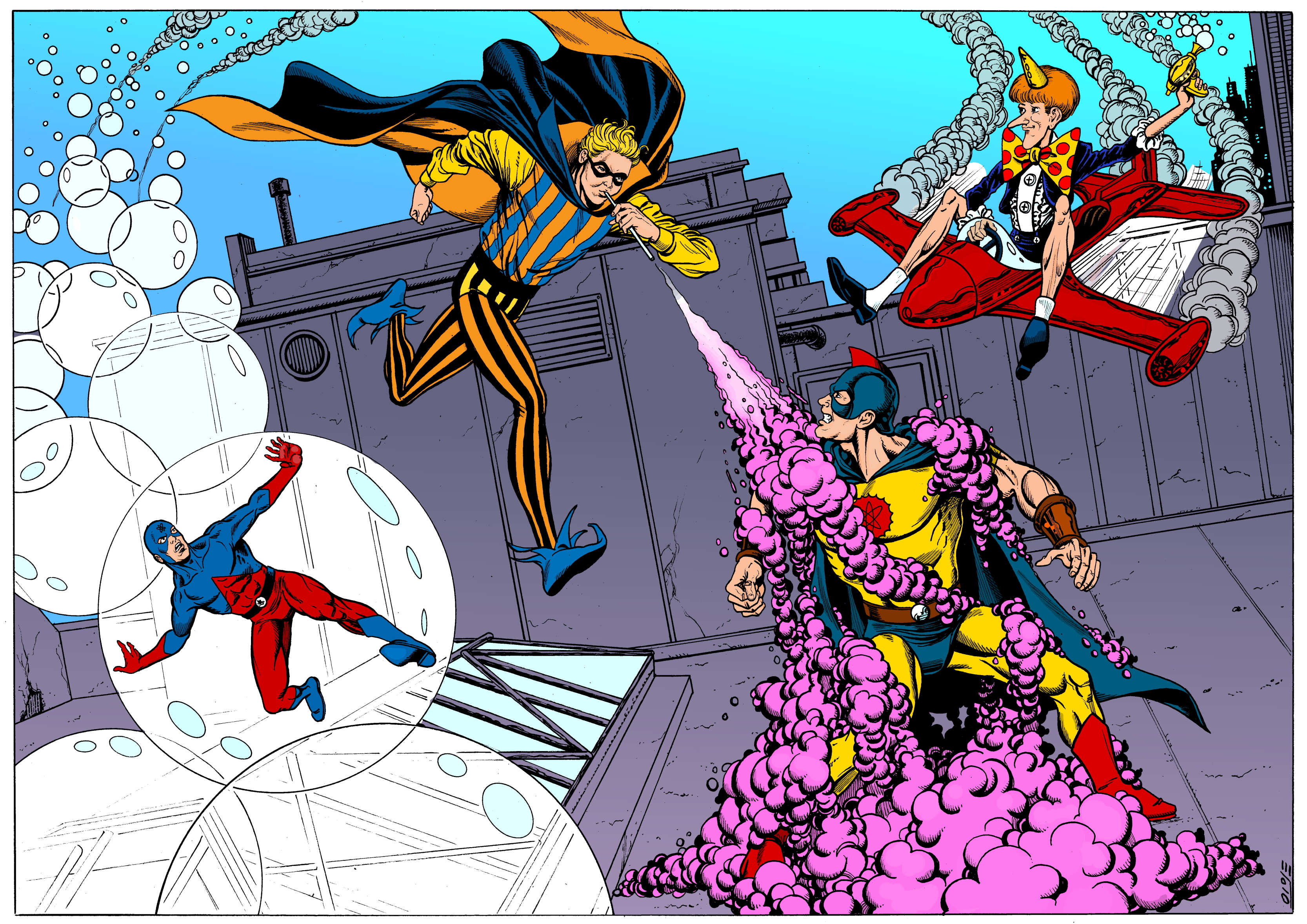 Golden Age Appearances of the Atom of Earth-Two

Appearances of the Atom of Earth-Two