Little is known of the alien woman known as Star Sapphire prior to her appearance on Earth in the late 1940's. Ruler and sole inhabitant of a world in what she refers to as the "7th dimension", the Star Sapphire takes a perverse pleasure in attempting to expand her realm to include Earth while tormenting Jay Garrick, the Golden Age Flash.

First contact was made with the Star Sapphire in the winter of 1947. Dr. Maria Flura was working late one evening in her laboratory when a large elliptical object appeared right before her eyes. The object included a large door with a purple-blue star emblazoned across it. The following day, Dr. Flura contacted the Flash about the object, assuming it was some mode of communication from their recent encounters with the "Secret City" hidden in the Amazon (Flash Comics #94, All-Flash Comics #31). Uncertain of it's origin, the two decide to take the empirical approach and open the object's door. Stepping inside, they are violently transported to another realm, where they find themselves confronted by a simple looking woman in a doctor's smock. Gloating over her bizarre victory, the woman transforms and  identifies herself as the Star Sapphire, ruler of this alien world. She explains to the Flash and that the object was her way of removing him and Flura  from the 3rd dimensional Earth while her world moved closer to it. Their presence on her world represents not a trip through space but  a form of astral projection. Their physical bodies remained on Earth, abandoned in an alley-way by a similarly projected form of the Star Sapphire.

Meanwhile on Earth, the bodies of the Flash and Maria Flura have been discovered and placed under observation at Keystone General Hospital. The scientists of the world have gathered to try to awaken the slumbering pair, unaware that a projected form of the cause of their worries, the Star Sapphire, is mingling among them. The doctors keep the unconscious duo in a glass case ventilated with pure oxygen in an attempt to counter the observation that the Flash and Dr. Flura are barely consuming enough oxygen to keep them alive. Opening the chamber is thought to be fatal. 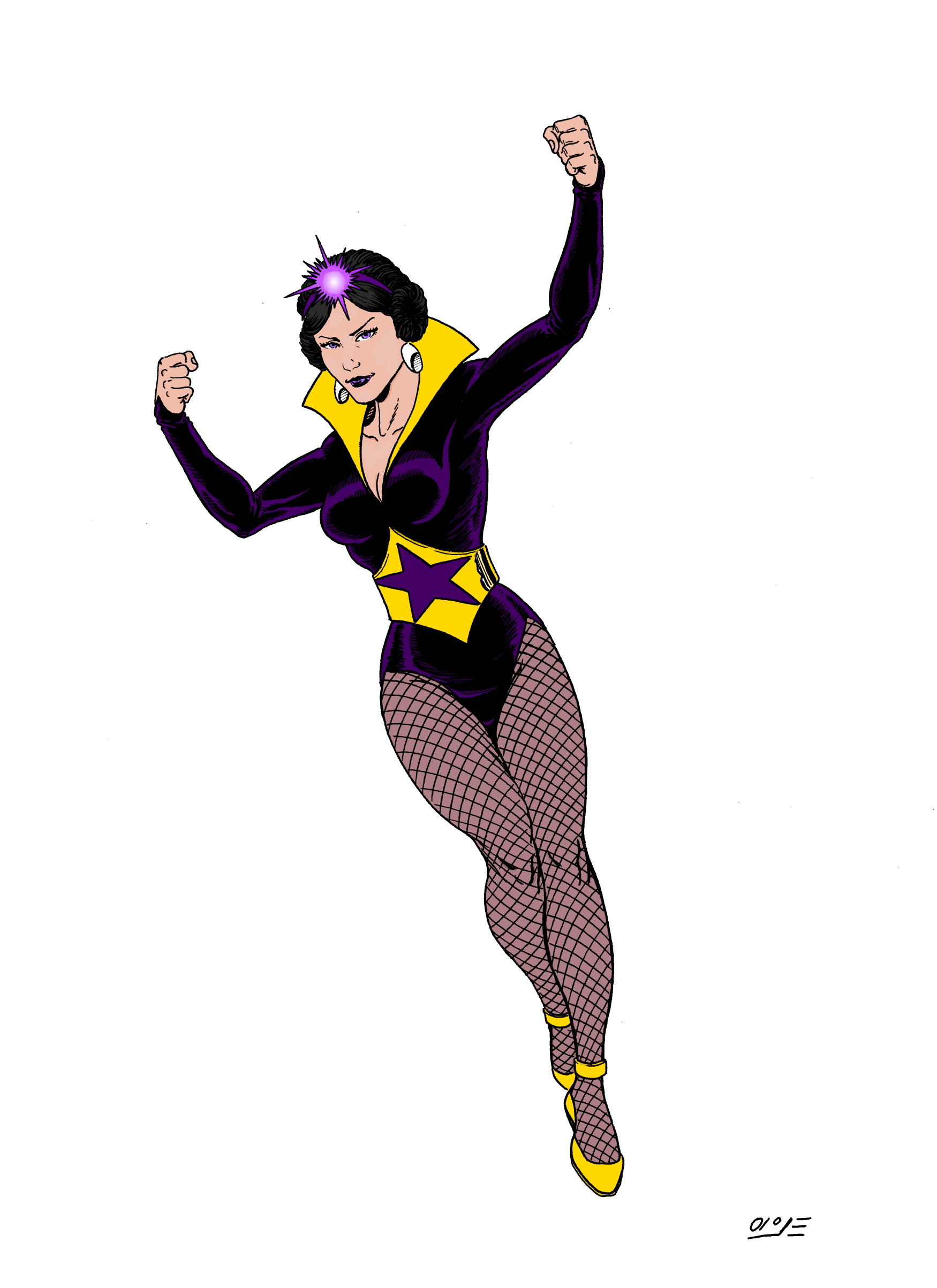 As the world ponders the fate of the Flash, a bizarre planet appears to be moving closer to Earth. This planet is in reality, a projection from the 7th dimension, a focal point through the Star Sapphire is siphoning off Earth's oxygen by destroying the planet's plant life. As the doctors began to collapse for lack of breath, she astonishes them in her astral form by lighting a cigarette and shattering the case in which the Flash and Dr. Flura are held. She explains that, by her calculations, The Flash has two minutes of life left, a fact she announces to the astral Flash on her homeworld. When his physical body dies, so will the astral one. She then challenges the Flash to a race, one in which he attempts to destroy the machine siphoning the oxygen from his world and she races to speed it up. He has only two minutes.

As the two speed across the bizarre landscape of the Sapphire world, the mad queen throws a variety of obstacles in the path of the speeding hero. Reaching the device with only seconds left, the Flash pours in a last bit of speed and as Dr. Flura observes from a distance, the oxygen-sapping device explodes presumably destroying both the Flash and Star Sapphire. Weeping for her loss, Flura is surprised when a smiling Flash races towards her. The Star Sapphire, he explains, has made a fatal error in calculations. Time as they know it on Earth is in no way related to time as it passes in the 7th dimension. What seemed like imminent demise on his own world was actually hours on the Star Sapphire planet. Rather than determine the fate of their tormentor, the two quickly board the object that brought them there and return to find themselves once more in their normal bodies and the populace gratefully gulping in the precious oxygen. The Star Sapphire was no where to be seen (All-Flash Comics #32).

Nonetheless, the world had not heard the last of the Star Sapphire.  A few months later, Jay Garrick settled into a restful sleep after a day of battling minor criminals. When he awoke, he noticed the man who tended the local newsstand was not on his job. Strolling further along, he encounters a group of women who seem astonished to see him. He is equally astonished when they seem most amazed at his gender. Ducking into an alley, he quickly changes to the Flash to elude the mob of women. Vibrating to keep himself invisible, he listens to their chatter and learns that none of them have seen a man all day. Reflecting, the Flash realizes that he also has seen no men. Slipping away, the Flash wonders if he is not indeed the last man on Earth. Meanwhile back in the park, the women notice a falling star heading straight for them. As it draws closer, it assumes a female shape, one the women recognize as the Star Sapphire. She declares she has dispatched the men of the world to the 6th dimension and come to claim both the Earth and it's female populace for her own. The women resist and attack the would-be conqueror, only to be easily repelled. One of them escapes and finds the Flash, warning him of the Star Sapphire's arrival. When the Flash races to the scene, he finds Star Sapphire rapidly rolling the women in mid-air, causing them to disintegrate. By racing counter-clockwise to the women's rotation,  he slows them down to normal. The Star Sapphire threatens the hero but as the Flash nabs her, they both disappear. The Mistress of the Seventh Dimension appears quickly, gloating that she has shifted the Flash to her home on the 7th dimensional Star Sapphire planet. She can rapidly return, she claims. He cannot. She then destroys part of the Keystone City skyline to emphasize that further resistance would prove not only futile, but fatal.

However, as she had in the past, the rogue queen had underestimated the Flash. While lacking the direct route, he wound his way through the 6th dimension, retrieving Earth's male populace and through the 4th dimension of time, returning the men to the instant after they disappeared. Their arrival corrected their own disappearance and the Star Sapphire then never arrived. Jay Garrick was returned to his home and the end of a good night's rest, the loop in time rapidly becoming a fading memory (Comic Cavalcade #29).

Whether the Star Sapphire ever escaped or is still alive remains to be seen. 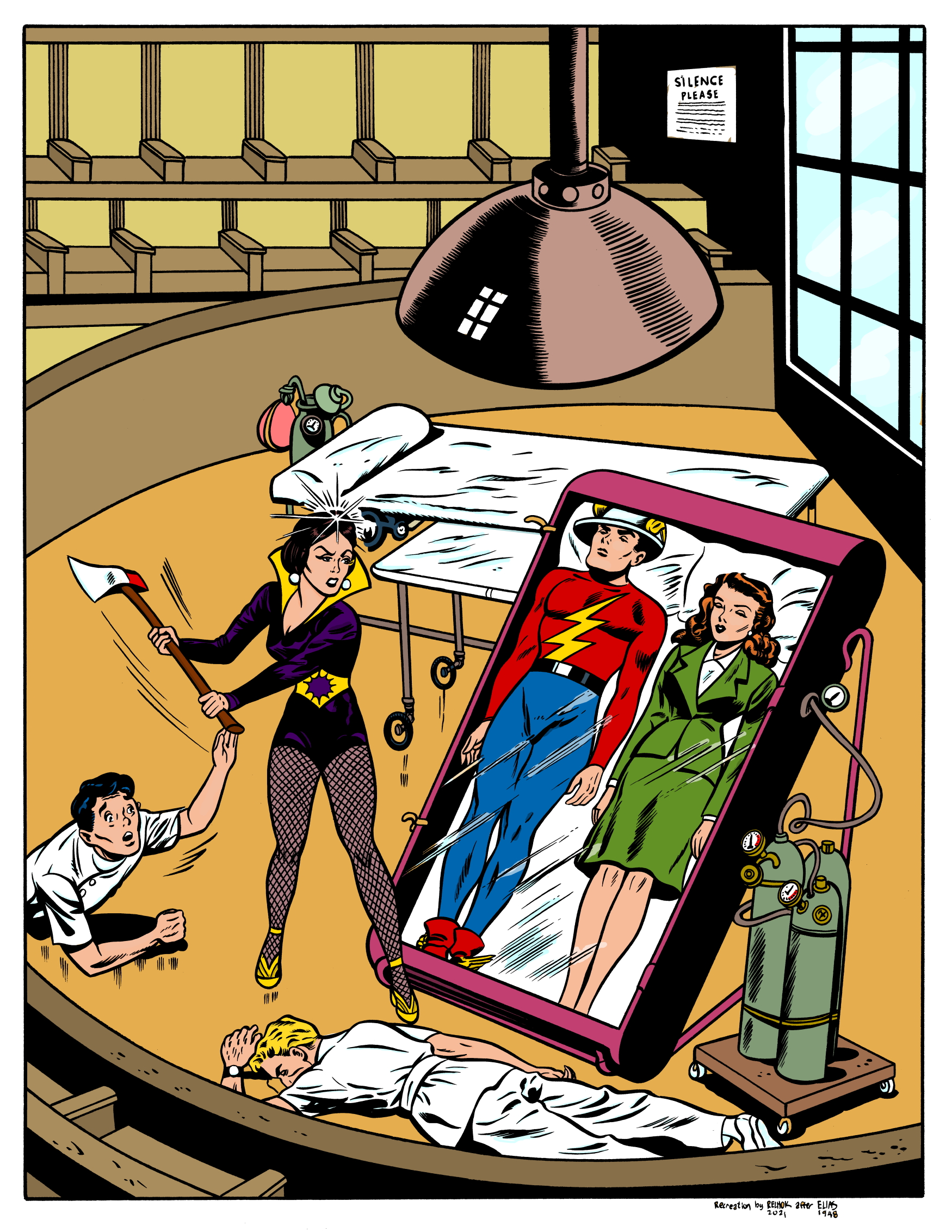 he Star Sapphire of Earth-Two's powers, while vast, are poorly defined. She seems equipped with an arsenal of weapons, including a replicate Zamaron star sapphire,  but their origins are largely unknown. She also seems to have a variety of personal powers, through whether they stem from herself or her personal armament is also unknown.

As with her powers, the limitations of the Star Sapphire are unclear. Psychologically, she has displayed an bizarre preoccupation with gender, suspected of reflecting a pathological fear of men. She also has a less than accurate grasp of the variations in physics between dimensions. She has been foiled in both of her recorded cases primarily by her own over-confidence. 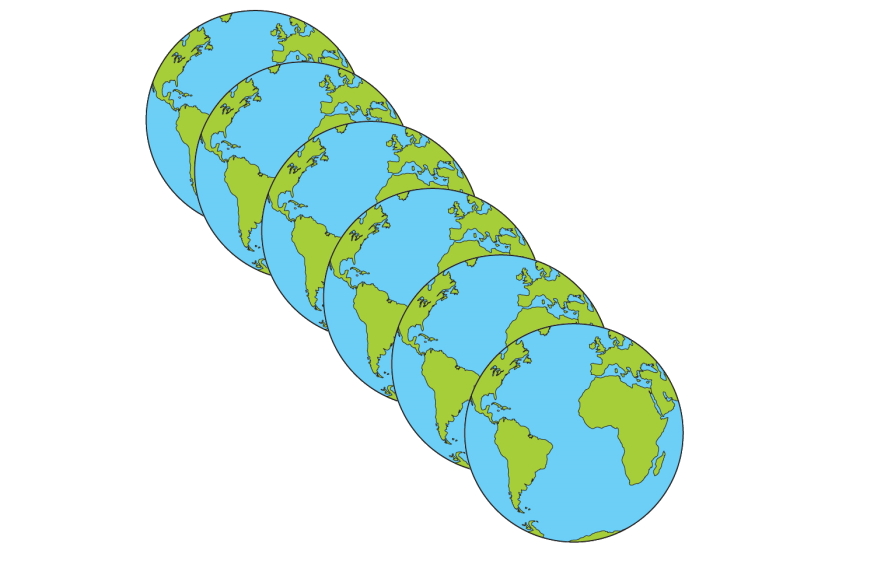 The Golden Age Version of the Star Sapphire in this universe was an exiled Zamaron and the world she inhabited was an otherworld prison.  Learning that the Zamarons had anointed Carol Ferris as the new Sapphire, the aging original Star Sapphire used her own weaker gem to control the Earth woman across the dimensions. As the new Star Sapphire rampaged across Ferris Aircraft, Green Lantern and the Flash combined forced to contain her. As Green Lantern (Hal Jordan) engaged the villainess first hand, the Flash (Barry Allen) traced the origins of the beam affecting her. In doing so, he traveled to the 7th dimension and was confronted by the elder Star Sapphire. Enraged by the latest evidence of  Zamaron abandonment, She attacked the Flash, only to be ultimately defeated by the younger hero. En route to Earth, the Flash dragged the deposed regent into the battle between Green Lantern and the new Star Sapphire. At the explosive climax to the battle, the elder Star Sapphire seemingly disappeared into the Sapphire gem, which Green Lantern promptly disposed of (Brave and the Bold LS #6).  Overtime Carol Ferris becomes aware of a corps of Star Sapphires driven the violet emotional spectrum color of Love and she becomes a regular member of the Star Sapphires (Green Lantern Vol. 4 #20).