Peter Merkel, a native of the Midwestern United States, was born with a unique condition: "Triple-jointedness". Like the more common "double-jointedness', Merkel's condition was characterized by extremely distensible ligaments and tendons, though to a significantly extended degree. The son of a side-show barker, Merkel found work in a small local carnival as a contortionist and eccentric dancer. In the early 1940's, the carnival fell on hard times and Merkel found himself out of work. Wandering the streets, Merkel despaired of having money. Seeing large boxes of toys being loaded into a department store, Merkel hit on the idea of hiding himself in one of the large rag dolls and then robbing the store after closing. Going unnoticed among the toys, Merkel carried his idea one step further: He would rob while still hidden in the Rag Doll suit. In these earliest days of costumed villains, the idea seemed novel and Merkel decided that no one would believe that a Rag Doll could commit crime.

In time, the legend of the Rag Doll grew far and wide. Petty crooks began to seek out the Rag Doll, to take advantage of his criminal success. In 1943, The Rag Doll moved his operation to Keystone City. There he had his thugs deliver him as a gift to a young heiress named Geralda Cummins. The young girl was holding a much-touted party for her circle of socialites and the Rag Doll aimed to take advantage of the situation. To coordinate the event, Cummins had selected Joan Williams who had recently began a party and festival business. It was decided that each of the wealthy guests would donate $10,000 in defense bonds to serve as a prize in a treasure hunt. Whoever solved the hunt first, won the prize. Unknown to Joan, the doll Geralda has received as gift was listening and planning a much different outcome.

The next evening, the guests gathered to here the reading of the first clue. As the guests departed,  the Rag Doll signaled his thugs to follow them to the museum while he stayed to interrogate Joan Williams. His ploy was delayed however, by the untimely arrival of William's beau, The Flash. While the Rag Doll remained in hiding, Williams and the Flash departed for the museum to provide the next clue. On their arrival, they were waylaid but the Rag Doll's thugs. While the Flash made short work of the henchmen, the Rag Doll himself drugged Joan with chloroform and stole the remaining clue. With these, he could find the treasure himself.

With the henchmen wrapped up, The Flash returned to find Joan amnesiac from the chloroform and with no recollection as to the location of the bonds. Taking the first clue, the Flash then began to solve the puzzle at super-speed and intercepted the Rag Doll on the 4th clue, at a local aquarium. The Rag Doll got the jump on Garrick with a swift blow to the skull and dumped the hero into an aquarium containing a giant octopus. He then raced quickly back to the Cummins estate to solve the treasure hunt with the 5th clue. Meanwhile, the Flash came to and after a tussle with the octopus, hotly pursued the criminal. He arrived just in time to see the Rag Doll pull the defense bonds out of their hiding place in the Cummins' grand piano. Quickly, and literally, tying the villain in knots, the Flash returned the gift and carted the outlandish criminal off to the Keystone City Jail (Flash Comics #36).

Flash is reported to have had several other encounters with the Rag Doll over the years but none have been recorded. In the mid 1970's, the Rag Doll became a pawn in a rather bizarre series of robberies. After encounter with the Thinker, the Rag Doll became brainwashed to commits crimes based on dolls. When the Flash intercepted the criminal, mundane "accidents" befell the elder speedster, undermining his self confidence. The Thinker's plan was to destroy the Flash's self esteem to the point that the hero would be too ineffectual to stop his grander plans. The Thinker was undone however, by a  surprise visit from the Flash of Earth-1, Barry Allen who quickly captured the former carnival worker. Allen also noticed a bizarre aura around the heads of Garrick and Merkel, suggesting that each was being manipulated in some way. At Merkel's interrogation, the Rag Doll swore that he had no recollection of any crimes, convincing Allen that there was a greater force at work. Quickly switching Merkel for a real rag doll, he convinced Garrick and the Keystone police that a bizarre transmorgification had occurred and that Merkel was somehow dead. He then departed, only to return and hide in the evidence room when the Thinker himself paid a visit to confirm the demise of his agent. Caught red-handed, the Thinker was quickly apprehended by the two Flashes and both the Thinker and the Rag Doll were returned to prison (The Flash #229).

In the early 1980's, the Rag Doll was contacted by the Ultra-Humanite, a long-standing foe of the Justice Society and the Golden Age Superman. Along with other elder villains as well as recruits from Earth-1, the Rag Doll became a founding member of the second generation of the Secret Society of Super-Villains. The Ultra-Humanite had devised a machine that, for the sacrifice of ten heroes to be held in stasis, five from each Earth, all the heroes on Earth-2 would disappear. each villain then was assigned a target and the Rag Doll, logically, took the Flash. After delivering a false tip to the Flash, the Rag Doll ambushed the hero on a freight ship in Keystone Harbor. After luring him into the hold, the Flash learned too late that all he would find there was a bomb, the explosion of which dropped the unconscious hero at the feet of his bizarre adversary.

As the other members of the Secret Society completed their task, the heroes were dispatched to Limbo, clearing Earth-2 of costumed heroes. Unfortunately, the Ultra-Humanite had deceived the heroes of Earth-1 into helping and while the Rag Doll and his colleague waged a massive crime wave on Earth-2, the villains of Earth-1 rescued the captured heroes in Limbo. In short order, the Secret Society of Super-Villains were consigned to Limbo and the balance of heroes on Earth-2 was restored (Justice League of America #195-197).

Limbo would not prove a prison for the Rag Doll for long. While trapped there, the Ultra-Humanite made contact with himself in the past, when he occupied the body of Dolores Winters in 1942.  Through the contact of advanced information, the Ultra-Humanite taught himself a way to open a portal to Limbo in the 1940's. On doing so, the Rag Doll and other members of the Secret Society escaped to assist the young Humanite defeat the All-Star Squadron. After a romp across the landscape of their youth, the aging villains proved no match for the large numbers of heroes and were beaten back to Limbo (All-Star Squadron #24-26, Annual #1). Rag Doll was witnessed during the Crisis on Infinite Earths but it is unclear whether this was a temporally displaced version or he had somehow escaped Limbo.  The fate of Earth-2 Rag Doll remains unknown.

The Rag Doll possessed hyper-elastic tendons and ligaments, allowing him to twist and contort in a variety of ways. This ability made him difficult to target and once captured, difficult to hold. It also facilitated the Rag Doll's unique brand of robbery, often by allowing him to stow away in places no ordinary human would fit. The Rag Doll's suit also had several advantages including insulation, ample storage space, and padded feet which allows him to move relatively silently.

Aside from his contortions, the Rag Doll possessed no super-powers and once captured, could be injured as an ordinary human.

In the merged world that emerged in the wake of Crisis, the history of the Rag Doll is thought to be largely similar to his Earth-Two counterpart up to right around the time of the Crisis on Infinite Earths.

By the late 1980's, the Rag Doll was well into his sixties. His hyper-elastic ligaments had begun to collapse and over-extend, causing the villain great pain. He was no longer able to even effect the lifestyle of the minor criminal. So the Rag Doll began to speak and talk and ramble as old men often do. As he did, he saw his words find weight the lost, the homeless, the disenfranchised. The gravitated toward him, soaking up his words and in time, became a cult of followers blind to his every indulgence and desire. And after a life of defeat and despair, what the Rag Doll desired was revenge. 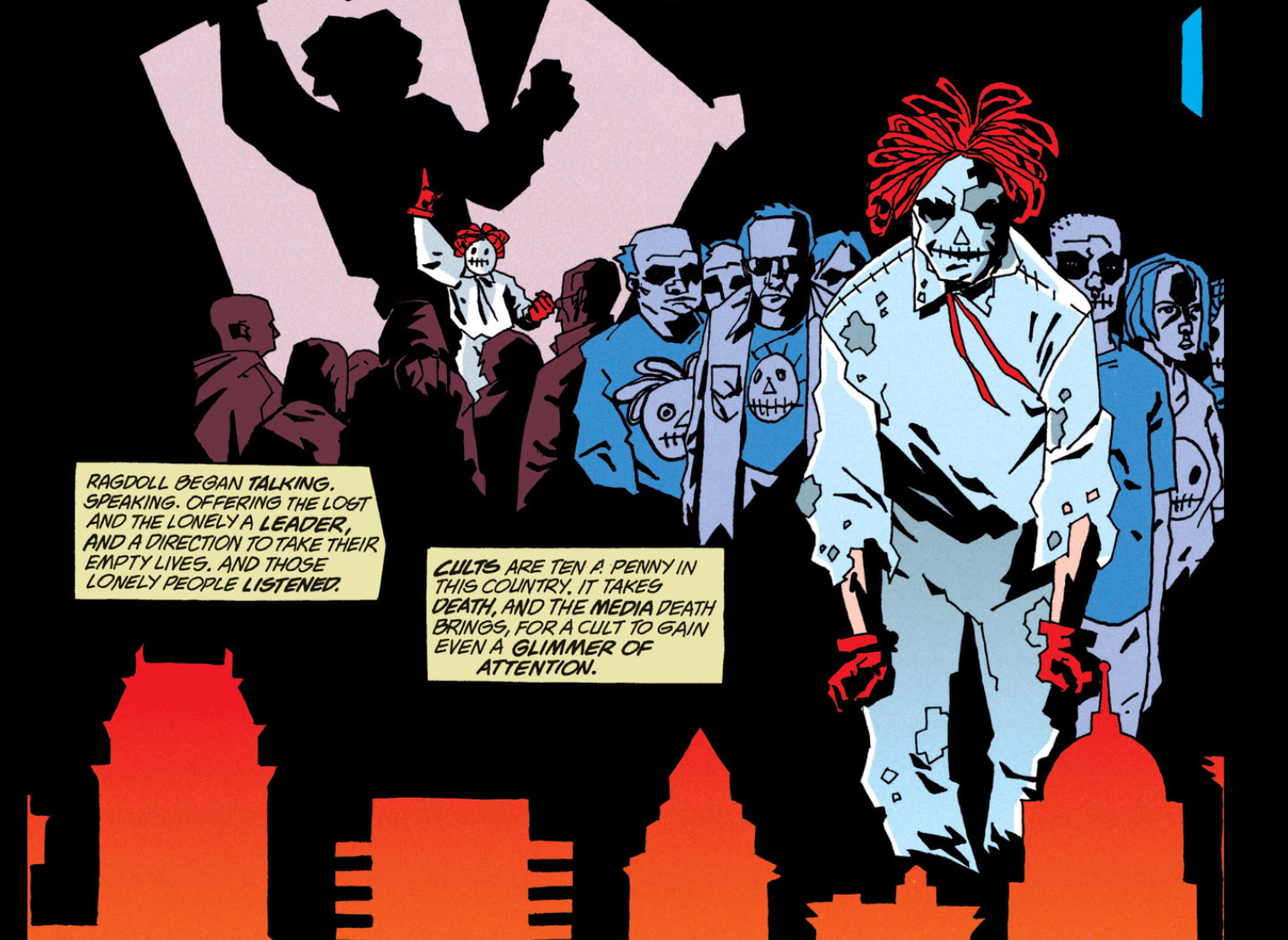 IOne hot summer in Opal City, the Rag Doll instructed his followers, 100's of them, to commit murder, robbery, rape and assault.  The crimes were random and illogical, fitting no pattern that the police or resident hero Starman could break. After obtaining a lead on the Rag Doll's whereabouts, Starman summoned the Justice Society. Their goal was to comprise a strike team to capture the Rag Doll and to send two others, Hourman and Dr. Mid-Nite, to thwart the Rag Doll's crimes of the evening, Finding the Rag Doll surrounded by followers, the Flash, Green Lantern and Starman swatted the followers aside and swiftly cornered the aging super-villain. Bound and waiting for arrest, the Rag Doll made a very convincing threat against the JSA, advising them that even in jail, he could manipulate his followers to track, assault and kill their families, friends and co-workers. While the JSA listened to the Rag Doll's discourse, the villain strained his limbs to slip free of his bonds and as the heroes seemed lulled, made a quick break for the door. The aftermath was never officially recorded but in an explosion of cosmic energy, the Rag Doll was found blasted to a painful death. It has since been largely concluded that Starman, fearing for the safety of his sons, had slain the villain, a fact disputed by witnesses Flash and Green Lantern (revealed in Starman vol. 2 #9, 11 and Starman 80-Page Giant #1).

Shortly after his demise, the body of the Rag Doll was stolen from the Opal City mortuary. Through unknown means, the Rag Doll had survived the JSA's assault and was taken into seclusion by his followers. When Neron offered the villains of earth a single wish in exchange for their souls, Merkel wished to be rejuvenated and improved. Neron complied and the Rag Doll has returned to the land of the living (revealed in Starman vol. 2 #68). His most recent activities involved joining a group of criminals assembled by Culp, dwarven counterpart to the Shade in an assualt on Opal City (Starman vol. 2 #62-68 ).  He later joined the Wizard's latest iteration of the Injustice Society on contract from Johnny Sorrow and was killed when betrayed the group and attempt to steal a mystical key Sorrow had sent them to find (JSA Classified #5-7).

The Rag Doll of this world had many children who followed in their father's criminal footsteps, including the second Rag Doll (Peter Merkel Jr. from Villains United #1) and Junior (Daughter Alex from Secret Six Vol. 2 #5).