Clifford Devoe was born in the first decade of the 1900's and even as a child, was recognized for his brilliant strategic mind. Turning his attention to law school, Devoe excelled as a trial attorney. By 1933, the ambitious young lawyer was a district attorney in Keystone City. During prohibition in Keystone City, mobster Hunk Norvock had established himself as an untouchable figure in Keystone's underworld. Brought to trial for murder in 1933, Norvock represented a prime opportunity for Devoe to establish a name for himself at a national level. Believing himself to finally have an unbeatable case against the crime lord, Devoe was stunned when the daughter of a powerful political figure took the stand in Norvock's defense. Unable to risk offending the jury with a barrage of questions at the doe-eyed heiress, Devoe withdrew his complaint and Norvock was freed.

Norvock's acquittal left Devoe publicly humiliated. His judgment was called into question, despite the truth of his case: Norvock's alibi had been the victim of extortion. Devoe turned to the solace of the bottle and one night, in a drunken stupor, paid a visit to Norvock. After sobering up, the attorney confided in Norvock that he had given up a life of fighting crime. By the crime lord's own example, crime did pay.   Devoe offered to be Norvock's "thinker", a planner of crime and a library of alibis and legal defense if Norvock should ever need one. Norvock provided Devoe a cottage on the outskirts of Keystone and a stipend to meet his needs. Devoe moved his legal library home with him and studied the law for loopholes and precedent.

Devoe remained in isolation for a decade, performing small tasks for Norvock and studying, never been called upon by the crime lord himself. However, in 1943, Norvock's criminal operations were being heavily pinched by the work of Jay Garrick, the Golden Age Flash. When two of his lieutenants were arrested, they signed lengthy confessions implicating Norvock in a number of illegal activities. Needing an out, Norvock recruited Devoe to resolve the problem. Impersonating a policeman, the "thinker" slipped into police headquarters, recover the signed confession and murdered the traitorous underlings. 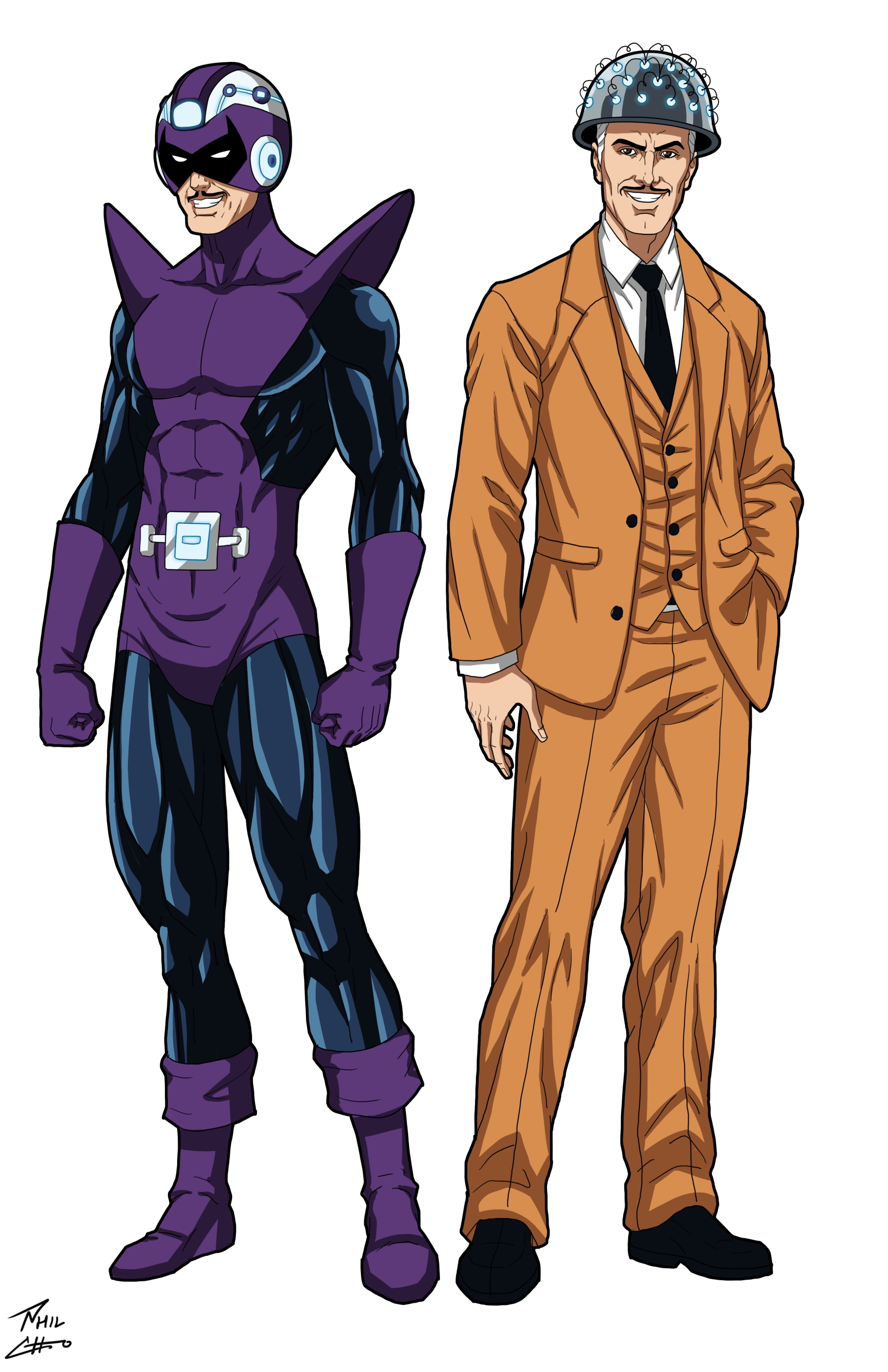 Initially grateful, Norvock quickly turned paranoid. Fearing further betrayal, Norvock resolved to kill Devoe. The wily "thinker", however, tricked the elder gangster into shooting a reflection of Devoe in a steel mirror, ricocheting the bullets back. When the gangster was felled by his own bullets, the police were left to conclude a suicide had occurred. Deprived of their leader, Keystone's organized crime families rapidly fell into disarray. A delegation of senior underbosses approached Devoe, soliciting his succession to Norvock.  Devoe agreed and adopted the nom du crime, The Thinker. The career of the Flash's most relentless foe had begun.

The Thinker's first criminal endeavor was to establish himself as a superior force in Keystone. To do this, his goal was to discredit the Flash. Sending a note to a local inn, the Thinker challenged the Flash to stop a series of crimes, including a jewel heist and the robbery of a finance company. Despite occasional setbacks, the Flash persevered, frustrating the villain. His final tactic was to lure the Flash into a series of traps in attempt to kill him in a personal confrontation. The Thinker, however, never quite believed the Flash's speed and was astonished when the speedster caught him unawares. For the first time in his life, Clifford Devoe saw jail from the other side of the bars (All-Flash #12). 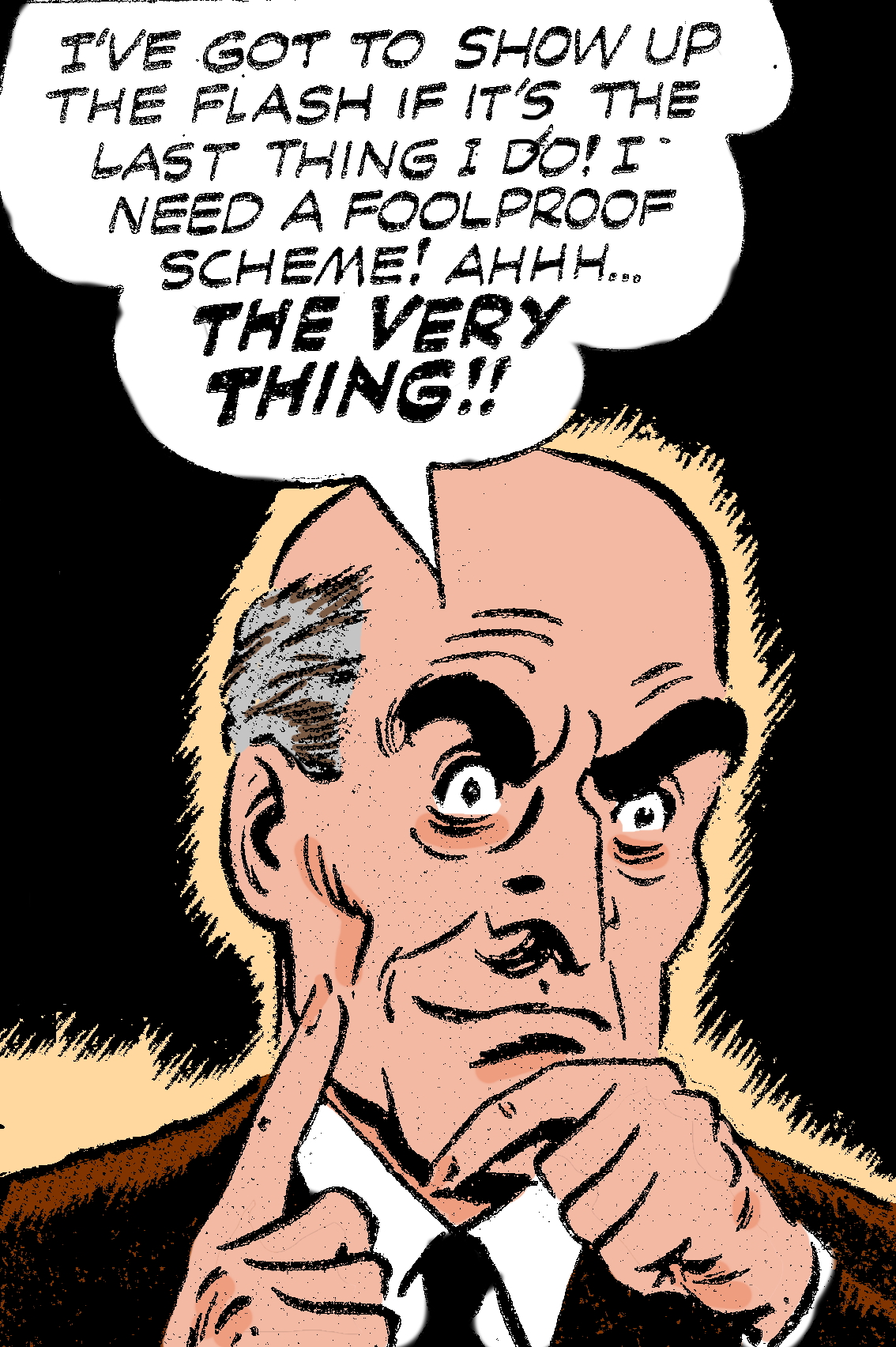 The Thinker spent several years in prison plotting his escape. By 1947, the Thinker was rarely in jail for long. Throughout the late 1940's and early 1950's, he waged a near constant war of crime against the Golden Age Flash. The Thinker's modus operandi can be categorized as two basic tactics: Technology and Organization.

The Thinker believed that the key to successful crime was to out power his super-powered adversaries. Many of his criminal ventures centered on with the use of or acquisition of novel technology. In 1947, he staged an escape from prison using a novel anesthetizer. He then staged a wide array of crimes based on a variety of novel gas combinations (tear gas, sneeze gas) to which only he and his subordinates were protected (All-Flash #27). A similar approach was used when the Thinker obtained an anesthetizer to sedate the population of Keystone City and rob it blind (Comic Cavalcade #23). In 1947, the Thinker corresponded with Professor Albert Cornier, a geophysicist studying the movement of glaciers in the Canadian north. Cornier had inadvertently device was not only monitoring the glaciers but actually accelerated them, threatening Keystone with a new ice age. Seizing the opportunity, the Thinker attempted to further his criminal career by "assisting" Cornier until thwarted by the Flash (Comic Cavalcade #22). In 1949, the Thinker learned of renown scientist Earl Hoffrith's invention of a machine that could see into time. Determined to the use the machine to predict opportunities for crime, the Thinker stole it, unaware that Hoffrith himself had foreseen this. Contacting the Flash, Hoffrith assisted in the Thinker's defeat and then destroyed his machine (Flash #214).

The Thinker also was a master organizer of criminal talent. He founded the first organization of criminals in 1947 under the name Crime Incorporated. Employing a safe cracker, an arsonist, a second-story man and other criminal "experts", the Thinker staged a series of crimes based on specialty. After some considerable success, his group was defeated by the intervention of the Flash (All-Flash #32). The Thinker was also a charter member of the original Injustice Society and likely had a significant role in it's organization. As part of their first foray against the Justice Society, the Thinker managed to capture the Flash. He was unfortunately waylaid by the Golden Age Green Lantern and replaced in the Injustice Society meeting place, freeing the JSA. The Thinker was returned to prison and the Injustice Society disbanded (All-Star Comics #37). In addition to his own organizations, the Thinker also maintained active collaborations with other Flash foes, including the Fiddler, the Rag Doll and the Shade. 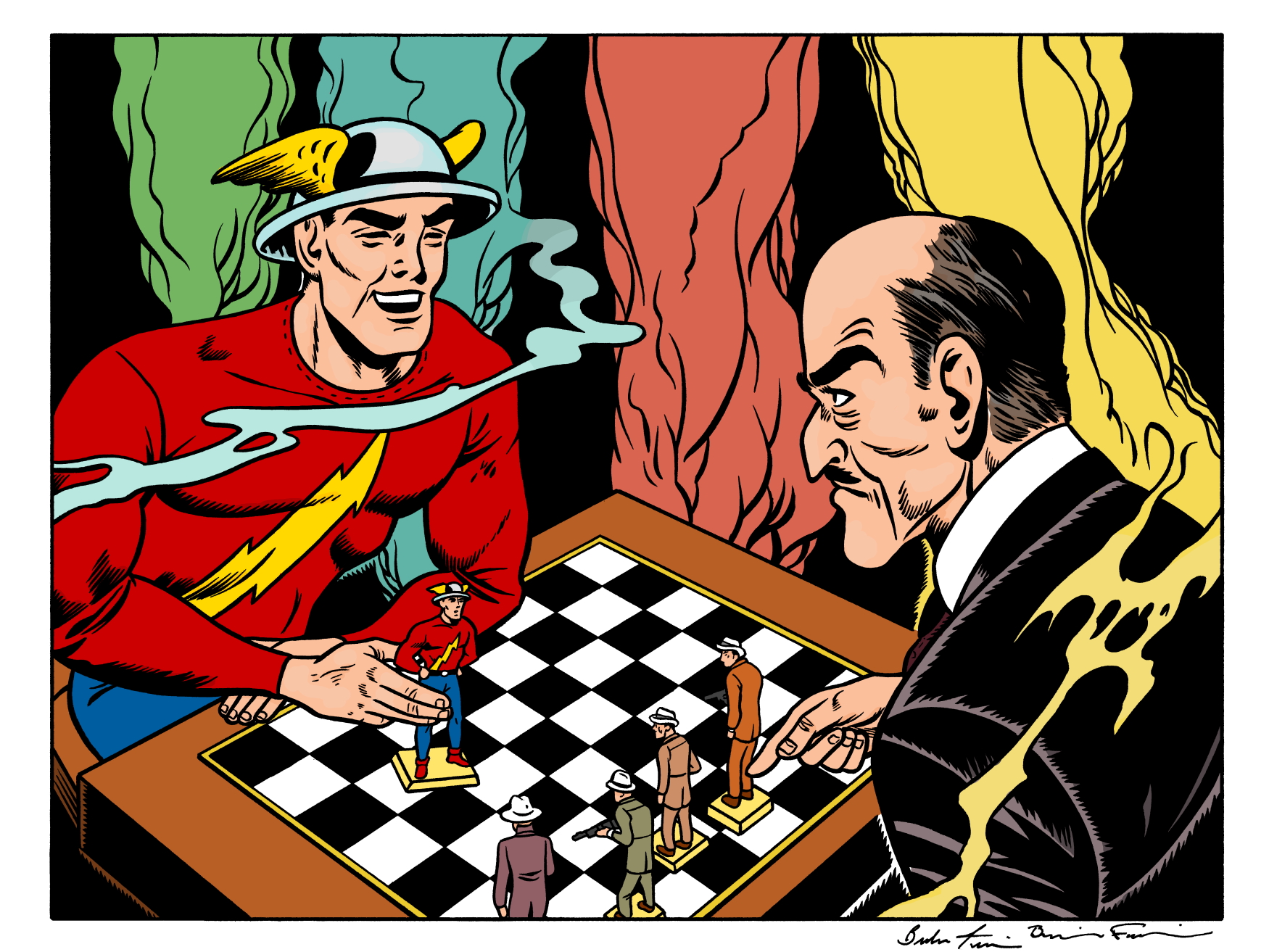 Sometime around 1950, the Thinker went from ganglord to super-villain. Through means that have never been revealed, Clifford Devoe acquired The Thinking Cap. The Thinking Cap is the invention of Dr. Hartford Jackson, a 1940's cyberneticist. Jackson designed a cap that allowed a great amplification of brain power but was abandoned after it fell into criminal hands and started a crime wave in 1945 (Flash Comics #65). At some point after mid-1949, the Thinker acquired the cap and added it to his personal arsenal of crime. The cap gave Devoe a level of personal power that he had never experienced prior to this point.

The Thinker's activities between 1950 and current times are not well-described. When he resurfaced, he had mastered the Thinking Cap and joined forces with the Fiddler and the Shade in a plan to sedate Keystone City and rob it blind. The three criminals were initially successful before their ploy was stumbled upon by the Silver Age Flash. Reviving his Golden Age predecessor, Allen quickly help Garrick round up the three criminals.  As a result of their actions, Keystone was freed and re-appeared as the twin city of Central City (Flash #123).

With the proliferation of new super-heroes, the Thinker recognized the need to upgrade his own technology. Given the expertise needed whenever he wore the helmet, the Thinker designed a new costume that incorporated the original Thinking Cap design coupled with a wider array of offensive weapons. In his first foray, he staged a series of robberies in Ivy Town, attracting the attention of both the Golden Age and Silver Age Atoms. While initially successful against either hero, the Thinker was defeated by the combined might of the two heroes. The Thinker schemes were also thwarted by Hourman (alluded to in Starman #37) and the combined forces of Power Girl and the Huntress (Wonder Woman # 274-276). In addition to this new strategy, he also renewed old acquaintances, working with the Rag Doll (Flash #229) and the Injustice Society (All-Star Comics #63-66).   The Thinker was still at least semi-active when the red skies of Crisis appear over Earth-Two but his ultimate fate remains unknown. 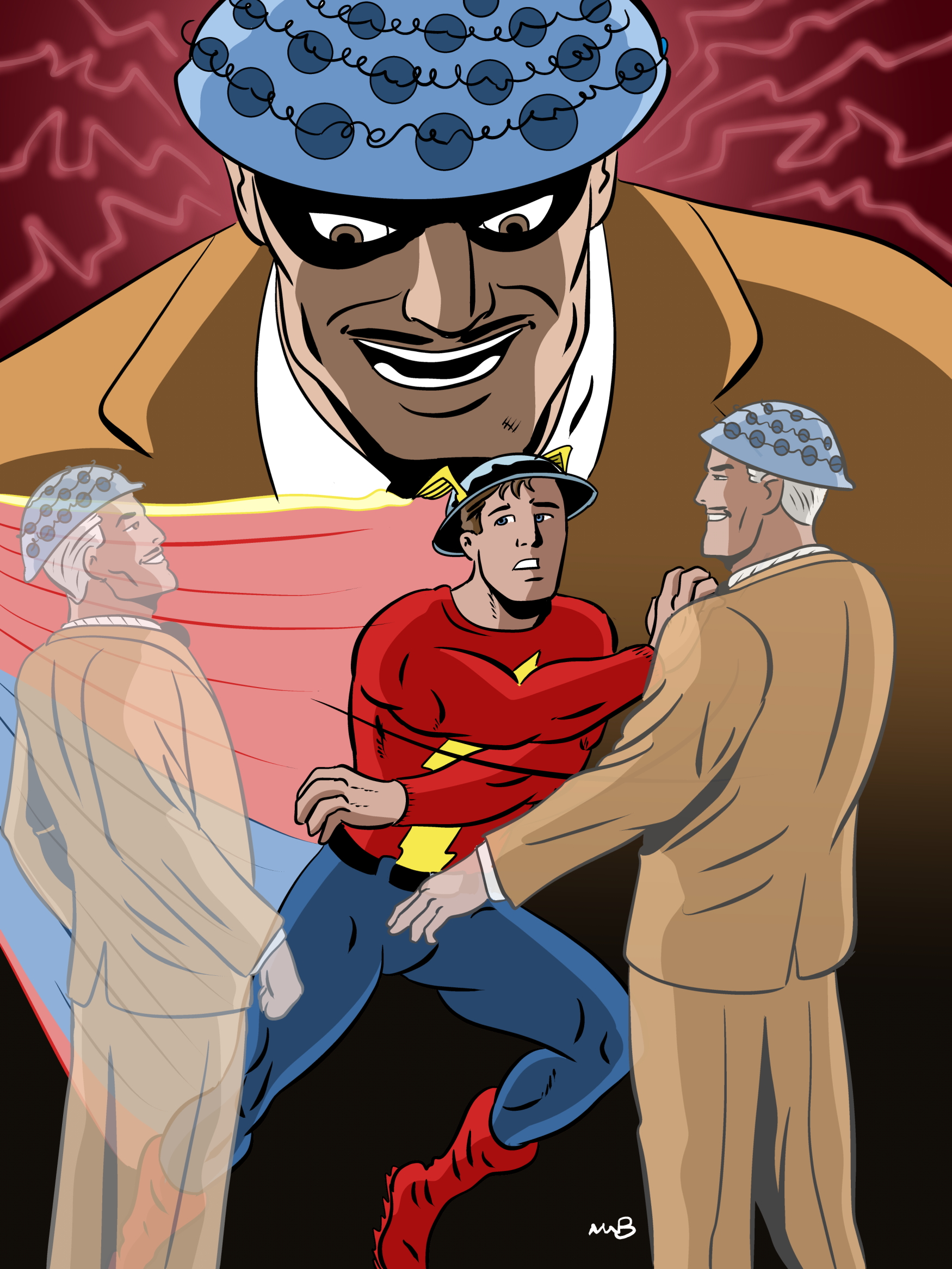 The Thinker was an incredibly skilled strategist and tactician. He has vast knowledge of the law and his understanding of many other disciplines was formidable. After he acquired the Thinking Cap, his intellectual capacity was vastly upgraded. The cap not only allowed the much more rapid thought processes associated with the Thinker's later career, but also allowed offensive assault via bolts of mental energy or the mental manipulation of other forms of energy.

Without the cap, the Thinker was a normal human and could be arrested as such. In Earth-0 timelines it was revealed that the chronic use of the cap was carcinogenic and that the AI in the cap may have affected Devoe's personality and he became less criminal once he abandoned it's use.  Whether this holds true of the Earth-2 Thinker has never been revealed.

On the new timeline most observed since Crisis, the Thinker's history appears largely similar to his  Earth-Two counterpart.  Toward the end of his life and repeatedly defeated, the Thinker began to question the point of his criminal career. Over 80 years old and preserved primarily by the cap, the Thinker decided to retire. Using his newer technology, he agreed to a field mission with the government task force colloquially referred to as the Suicide Squad. Pending a successful operation in Central America, Devoe would receive a presidential pardon and could retire in peace. While the mission was relatively straight-forward, an unstable element was added with the included of the Weasel, a psychotic foe of Firestorm. The Thinker and the Weasel clashed and in an instant when Devoe was unaware, the Weasel slashed the elder man's throat. Squad leader Rick Flagg took possession of the Thinker's helmet and left Devoe to die. The Weasel did not escape, however. The artificial intelligence in the cap avenged the man with whom it had been bonded for nearly 50 years and slew the unstable criminal (Suicide Squad/Doom Patrol Special #1).

The Squad had been hasty to abandon the Thinker however. Weakened by the loss of blood, the Thinker survived and eventually made his way home, to Keystone City. No longer in possession of his cap, the Thinker reformed and became a model citizen of Keystone. He devoted his time to good works and befriended Jay Garrick, his former adversary. In 1998, Clifford Devoe was diagnosed with brain cancer, a parting gift of the Thinking Cap. By 1999, the former villain was terminal. Contacting Garrick in his last days, Devoe sought once last celebration of his life with his former enemy. Garrick, however, had other plans. Believing that the Thinking Cap could give Devoe the ability to think of a cure, the Flash scoured the globe for the Thinker's former headgear. By the time he found it, the Thinker had expired. Garrick was not deterred and placed the cap on Devoe's head. Activating it revived the villain but to Flash's dismay, Devoe was uninterested in being revived. After lecturing Garrick on the need for the graceful exit, Devoe removed the cap. One of the greatest criminal minds of the 20th century died on his own terms (Flash Vol. 2, #134)

Following Devoe's death, the cap technology fell into the hands other criminals, notably Clifford Carmichael who became the new Thinker of Earth-0.  It was later revealed that the cap possessed a level of artificial intelligence (AI) that became more active when the cap was further manipulated.  The last Thinker on record on Earth-0 was an AI version of the cap.