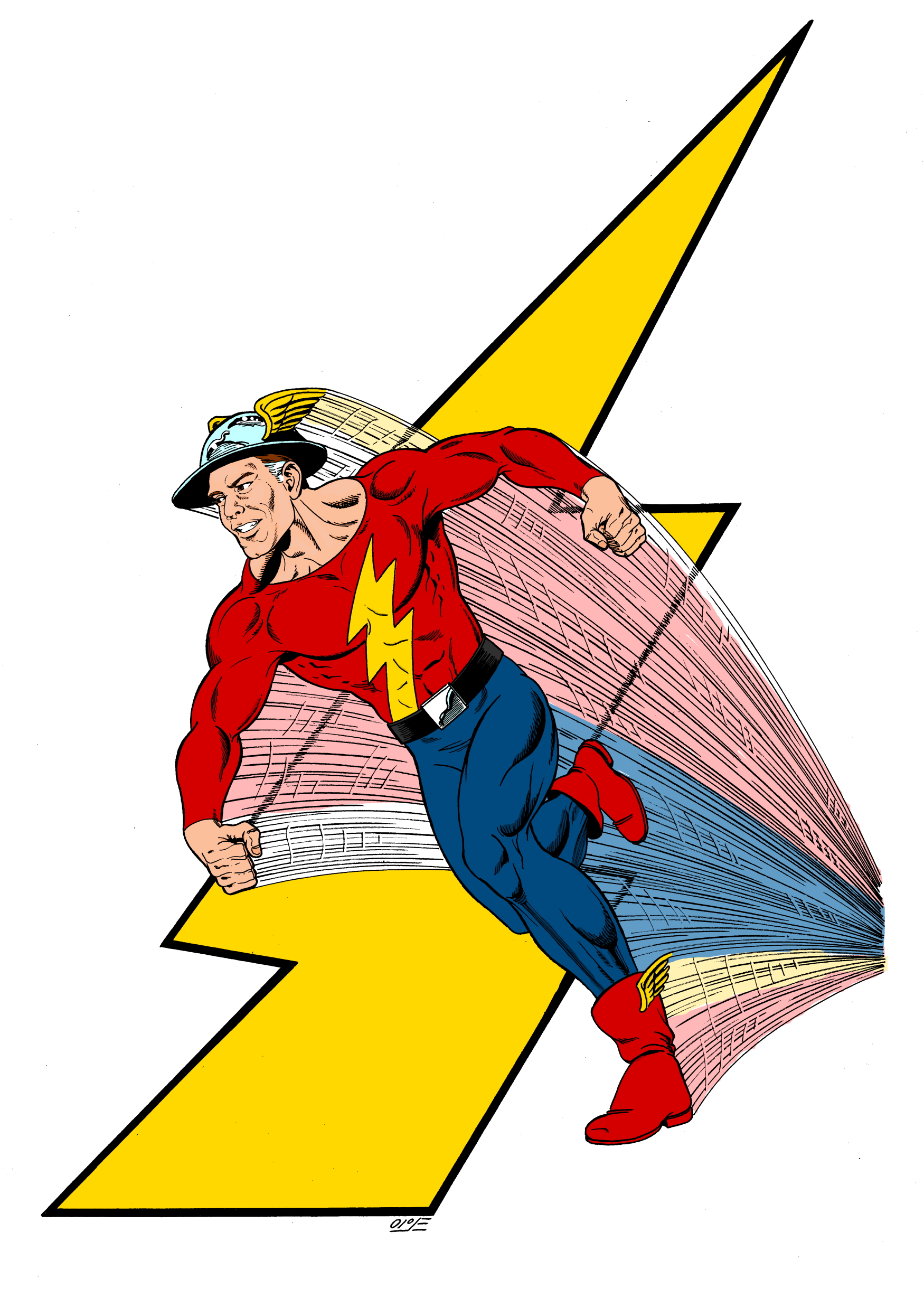 Jay Garrick was born in 1918. Little is known of his early life until he became a science major at Midwestern University. In those days, Garrick was a sub-par member of the University football team and attracted to Joan Williams, the daughter of a U.S. Army major. Williams snubbed Garrick for the football team captain, rejecting Garrick as a "scrub." Though somewhat untalented at football, Garrick excelled in science. His work with one of his mentors, Professor Hughes, led to new insights about the nature of "hard water." One night,  in a late experiment, Garrick paused to indulge his smoking habit around 3 AM. Lighting the cigarette, Garrick knocked over some of the "hard water," spilling it and several other chemicals. Garrick was overcome by the fumes and lay unconscious in the laboratory for hours until Hughes arrived to check his progress the next morning. Garrick was rushed to a local hospital and lay in a coma for weeks. When he regained consciousness, one of the doctors confided to Hughes that Garrick's test results were highly unusual, indicative of an extremely accelerated metabolism. When Garrick was released, he immediately discovered that he had the power of super-speed, as he caught Joan Garrick getting on a bus in the blink of an eye. Over the next few days, Jay Garrick explored his powers, participating in a college football game which he won by using just a bit of his accelerated abilities. As time passed, Garrick graduated Midwestern and moved on. Joan Williams joined her father in Washington, and the two parted ways.

Garrick landed a job as an assistant professor at Coleman University in New York. After reading news of crime in New York, he was inspired to create a costumed identity of his own, the Flash, to battle crime. A few weeks later, Joan Williams visited from Washington with dire news: her father had been kidnapped by a gang of criminals known as the Faultless Four. Joan appealed to Garrick to rescue her father in the guise of the Flash. As she explained, an assassin fired a gun from a passing car at Joan Williams. Garrick stopped the bullet and agreed to help the Flash. When the assassin returned, disguised as an undertaker to verify Williams's death, Garrick followed him as the Flash. Doing so led him to follow the assassin, a member of the Faultless Four, to the group's hideout. There the Flash rescued Major Williams and returned him to his home. Afterward, the Flash returned to the Faultless Four's hideout and learned of the Four's intention to create a distraction at Coney Island to cover a second attempt on the Williams. The next day, the Flash thwarted the attempt at Coney Island and then returned the Faultless Four in their hideaway. As he confronted them, Sieur Satan, the leader of the Four, threw a switch and electrocuted the three other members of Four in an attempt to also slay the Flash. The hero, however, had followed Satan as he slipped out to throw the switch, and pursued Sieur Satan as he fled. Ultimately, the Flash drove Satan's car from the road, seemingly killing him (Flash Comics #1). 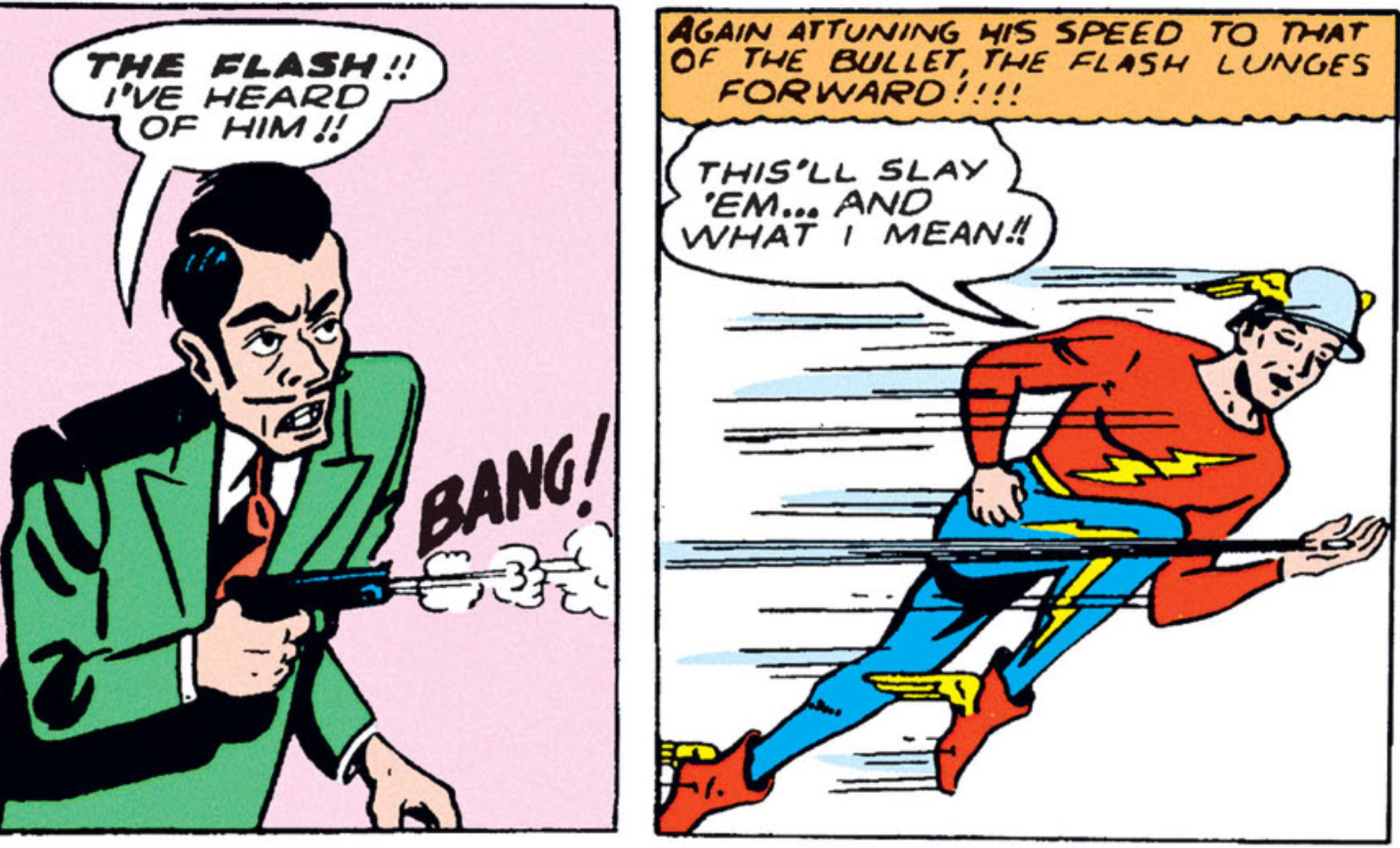 In the early days of his career, The Flash engaged in a far-ranging career including local case work in New York (Flash Comics #2, 5), periodic returns to Keystone (Flash Comics #6) and interventions across the United States in Minnesota (Flash Comics #7), Canada (Flash Comics #9) and the American West (Flash comics #13).  International adventures took him to the nation of Kurtavia (Flash Comics #12), Mexico (Flash Comics #16) and even Mars (Flash Comics #24).I n late 1940, his national reputation resulted in the Flash being selected by U.S. Intelligence to join Batman and Green Lantern on an undercover operation in England, an act which resulted in their capture by Nazi forces and transport to Berlin. The three were later rescued by Dr. Fate and Hourman and joined the pursuit of Hitler's Valkyries across the ocean. The defeat of the Valkyries led to the formation of the Justice Society of America, of which the Flash was a charter member (DC Special #29). He left the JSA in 1941 and was semi-active for the rest of the war (All-Star Comics #6). The Flash also became a regular member of the All-Star Squadron after its formation (All-Star Squadron #3). The Flash participated in the JSA's pursuit of Ian Karkull in late 1941, a case in which he again encountered Sieur Satan, who had not been killed in 1940. As Karkull died, Garrick and Joan Williams were exposed to the radiation which added years and vitality to the rest of their lives (All-Star Squadron Annual #3).

Afterward, Garrick and Joan Williams became a steady couple, and moved to Keystone City she often covered for him as the Flash. While Garrick was initial cavalier about his identity as the Flash, he eventually became more circumspect to protect Joan and their emerging new life together (Flash Comics #17). Unlike many heroes at the start of their careers, the Flash was openly accepted by the Keystone Police and deputized as a police detective in the summer of 1940 (All-Star Comics vol. 1 #1).    In addition to his activities as a super-hero, Jay Garrick was a civic figure of some reknown in Keystone City.  He participated in a series of social gatherings held by the Keystone City Liar's Club (Flash Comics #44). The Liar's Club was a organization dedicated to honing of the abiility to tell tall tales. Many contests in the Liar's Club were won by Garrick for simply reciting his adventures as the Flash (All-Flash #18, 30, Comic Cavalcade #9, 13, 19).

As much or more than many of the mystery-men of his day, the Flash attracted a Rogue's Gallery of unusual criminals that became frequent adversaries. In 1942, The Flash battled a villain that had the power of darkness at his command. The Shade used a machine to rob Keystone under a veil of impenetrable night (Flash Comics #33), thought he would later expand his repertoire to greater forms of darkness. Later that year, he tangled with Peter Merkel, a small-time thief who used his naturally "triple-jointed" limbs to facilitate his robberies as the Rag Doll (Flash Comics #36). In 1943, Keystone City District Attorney Clifford Devoe masterminded a series of crimes while using his position and intellect to overcome legal obstacles afterward, a practice that earned him the monicker of "The Thinker" (All-Flash #12). Each of these criminals became recurrent foes for the Flash throughout his career.

In 1945, the Flash rejoined the JSA full-time (All-Star Comics #25). Jay Garrick became am independent researcher in Keystone City and was engaged to Joan Williams. In 1947, The Flash encountered two more significant adversaries: The Star Sapphire and the Fiddler. The Star Sapphire claimed to be an alien princess from a temporally displaced planet of which she was the sole inhabitant. She attempted to revive life of her world by sapping the oxygen out of Earth and transferring to her world (All-Flash #32). The Fiddler was really Isaac Bowin, a petty thief who had learned the secret of hypnotic music while in an Indian prison. In his first encounter with the Flash, he used the serendipitous concert by his twin brother to confuse the Flash (All-Flash #32). He was ultimately defeated but returned to battle the Flash later that year (Flash Comics #93). 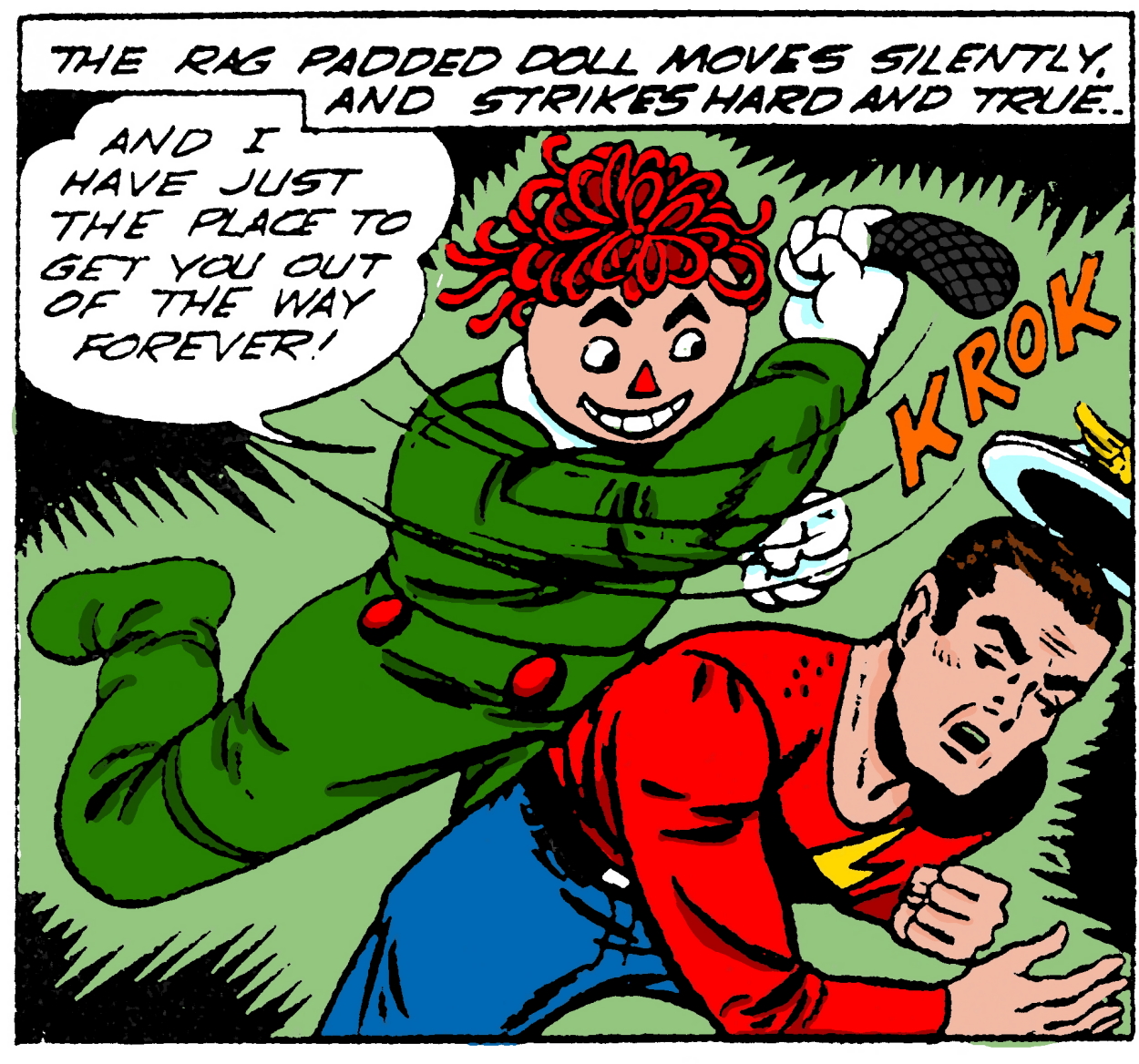 Another important adversary was Rose Canton, also known as the Thorn. Canton was a classic schizophrenic, a split personality. The "Rose" part of her character was a gentle assistant to Professor Hollis, a botanist on Tashmi Island. While there, Rose developed her second personality, the Thorn. The Thorn despised the insipid Rose and murdered her beloved mentor. She then traveled to Keystone City and engaged the Flash on two occasions, eluding capture each time by slipping back into her "Rose" persona (Flash Comics #89, #96). In their third encounter, she again "became" Rose, but the Flash had determined her secret. Contacting Green Lantern and Wonder Woman, he arranged for Rose to be treated by Amazon psychotherapists on Transformation Island. Rose, however, had become infatuated with Green Lantern and returned to him many years later (Lois Lane #113, Infinity Inc. Annual #1).

The Flash remained one of the most ardent members of the Justice Society, participating in almost all known casework after  the war.  He was  an active member of the Justice Society during its last case and was present at the HUAC meetings in 1951. He declined to reveal his identity during those meetings and retired along with the rest of his fellow JSA members.  He married Joan Williams and settled into a normal life in Keystone, tho he was not above helping those JSAers who managed to stay active through government connections so long as he did not reveal himself (JSA #82). 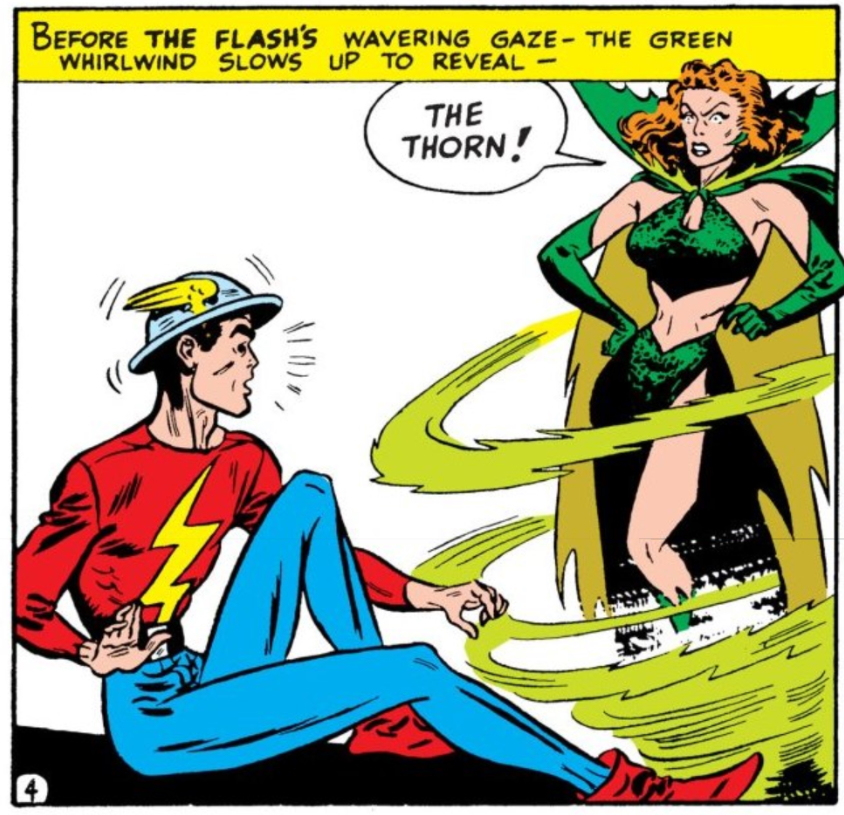 During the early 1960s, Keystone City was subdued by the Fiddler, The Thinker, and the Shade. The residents were lulled into a deep sleep while the three looted the city. The dissonance produced by the device keeping the city subdued was detected on Earth-1 by Barry Allen, the Flash of Earth-1. By adjusting his vibrations to the same "frequency," the Earth-1 Flash traveled to Earth-2 and tracked down Jay Garrick. The two combined forces and defeated the three villains, and Keystone City was restored to normal (The Flash vol. 1 #123).  From this point on, travel between Earths-One and -Two became much more common.

At this point, the Flash returned to active duty. The Flash ventured to Earth-1 shortly thereafter and helped the Flash of Earth-1 defeat the Trickster and Captain Cold (The Flash vol. 1 #129). Shortly thereafter, Vandal Savage captured several other recently-active members of the JSA. The Flash then solicited the aid of Earth-1's Flash and the two overcame Savage, freeing the Justice Society. This landmark case marked the returned of the Justice Society to active duty in the world of law enforcement (The Flash vol. 1 #137). 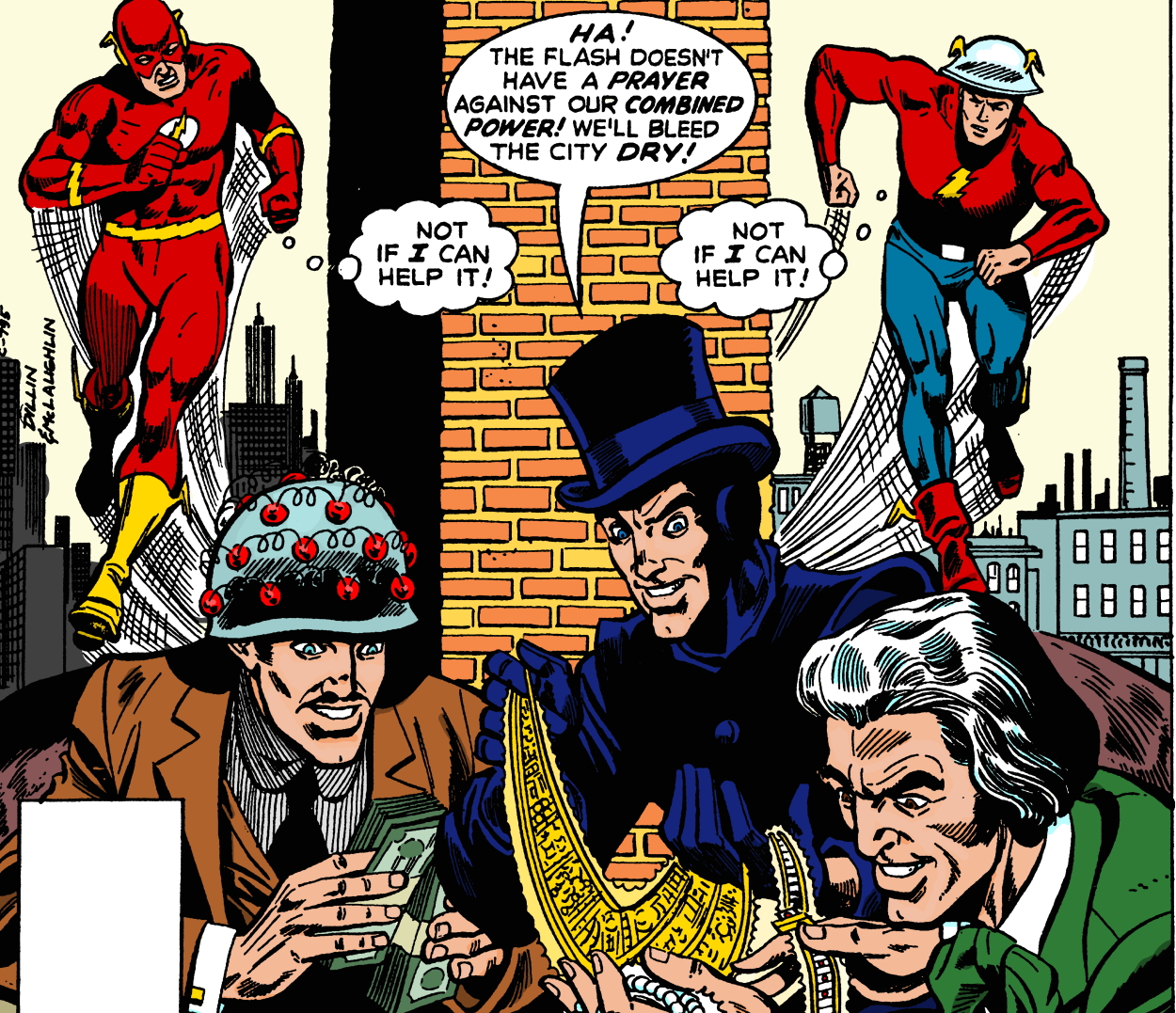 As the Justice Society returned to prominence, the Flash was one of the most active members.  He frequently participated in cases with the Justice League of Earth-One and when younger members of Earth-Two's super-hero community emerged, he remained actively involved in mentoring  them (All-Star Comics #58).

By the mid-1970's, Garrick Laboratories was a significant industry in Keystone.  When  the Psycho-Pirate took possession of Green Lantern and ruined the life of Alan Scott in Gotham, Jay extended an offer of employment (All-Star Comics #67-69).  He revealed his identity to the public in an issue of We magazine in the late 1970s (Flash Spectacular #1), publicly embracing his heroic identity.  This act later caused him some grief with the Thorn (All-Star Comics #73). Up until the Crisis on Infinite Earths, Jay Garrick was one of the most active members of the Justice Society, taking part in almost every case.   He is known to have survived the Crisis and appeared in a group picture with the Justice Society as late as 2007 but is thought to be largely retired, living with Joan and only occasionally active (Justice Society of America #20, Annual #1).  His current activities and whether anyone has taken the legacy of the Earth-Two Flash remains unknown. 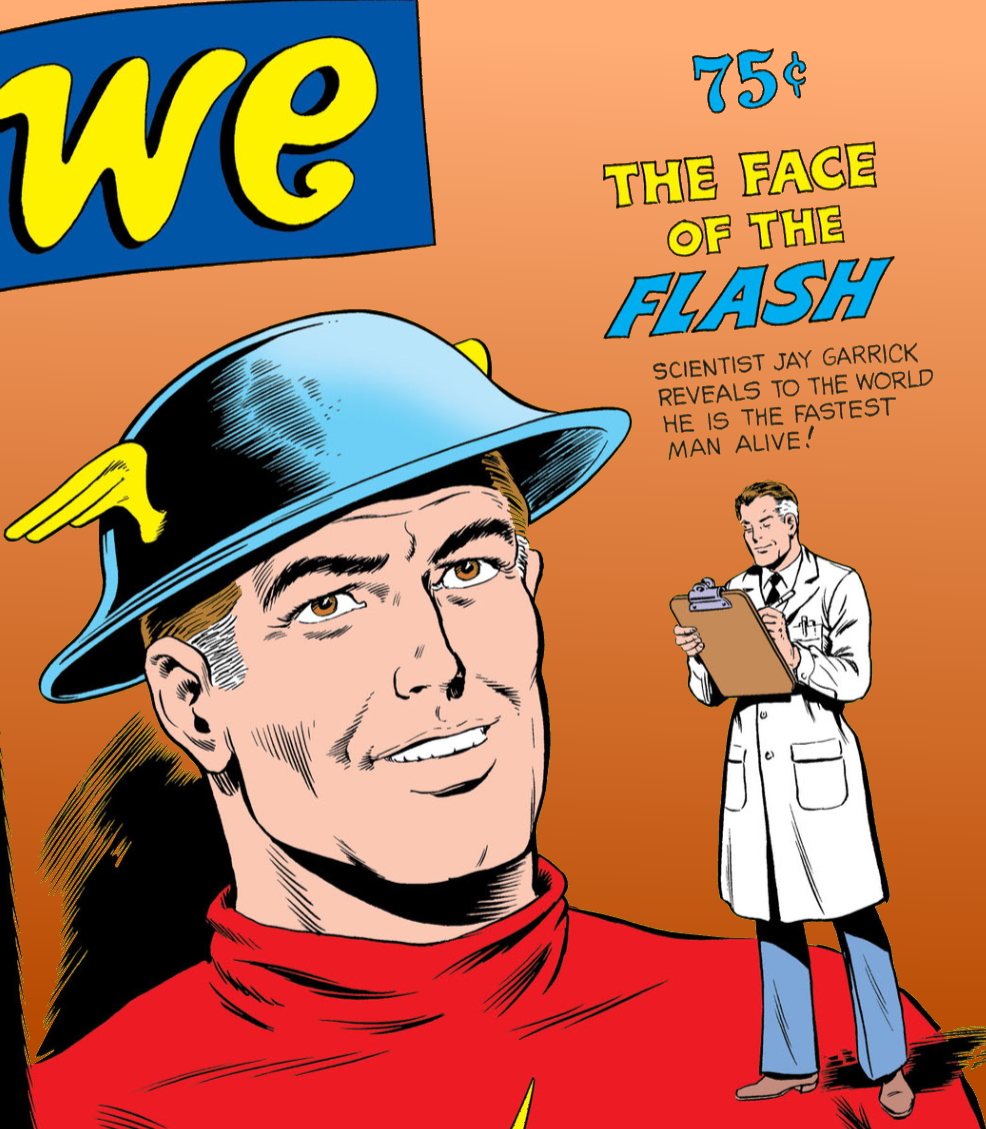 The Flash possesses the ability to move at tremendous speed. This allows him not only to run at near light speed, but also to "vibrate" his body's molecules, enabling him to pass through solid matter. The Flash's speed has deteriorated somewhat with age.

The Flash, when not moving at super-speed, is an ordinary mortal and can be wounded as such.

Golden Age Appearances of  The Flash

Post-Golden Age Appearances of the Flash of Earth-Two