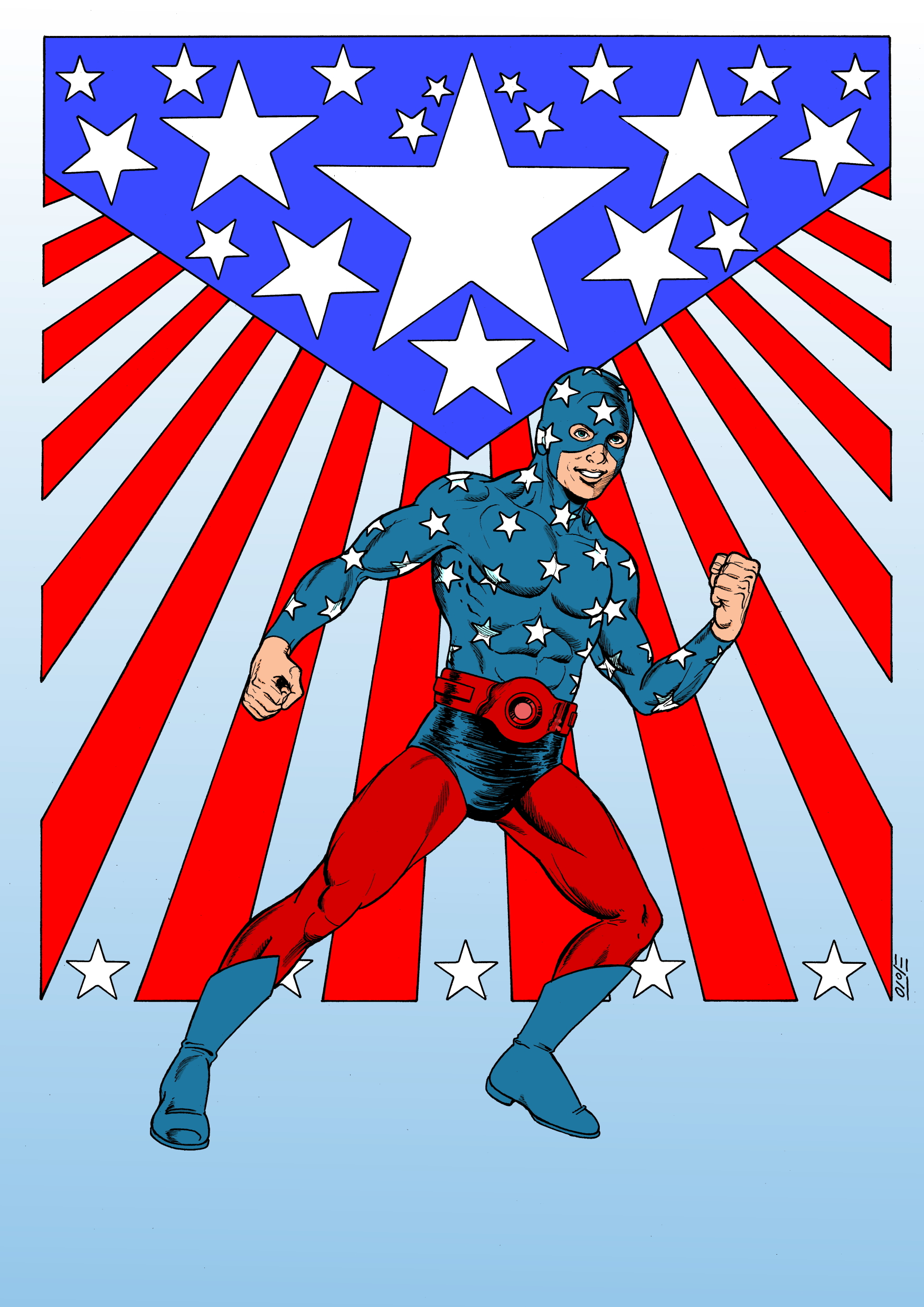 Sylvester Pemberton was born in 1926, the son of wealthy banker Sylvester J. Pemberton (revealed in Infinity Inc. #19). As a young boy in the early 1940s, Pemberton was watching a patriotic film when the showing was disrupted by pro-Nazi agents who incited the theater-goers to riot. Though still quite young, Pemberton fought off the Nazis with the aid of an adult auto mechanic named Pat Dugan. Sometime later, Pemberton was at Dugan's auto shop, waiting for repairs on his father's automobile, when the two were over-heard a discussion in which a fantastic idea, that the America flag itself should come to life and defeat the Nazis, was discussed. The two were inspired to become mystery-men, popular heroes at the time, and each created a uniform based on the American flag. Pemberton took the code-name "Star-Spangled Kid" and Dugan took the name "Stripsey" (Action Comics #40, Star-Spangled Comics #1). The two eventually became partners and Pemberton arranged that his father hire Dugan as in-house mechanic and chauffeur. Early in World War II, the two had a series of encounters with villains such as Dr. Weerd (Star-Spangled Comics #1) and The Needle (Star-Spangled Comics #4). They joined the Law's Legionnaires, a group later renamed the Seven Soldiers of Victory (Leading Comics #1), and the loosely-organized All-Star Squadron (All-Star Squadron #3).

At some point after the war, the Seven Soldiers of Victory engaged an alien conqueror called the Nebula-Man, attempted to destroy them and the Earth. A device, the Nebula-Rod, was designed to defeat the alien. The resulting explosion destroyed the Nebula-Man, killed Wing (the unofficial "Eighth Soldier of Victory"), and scattered the remaining members of the Seven Soldiers of Victory through time. The displacement of the SSV through time caused a temporal imbalance, resulting in the erasure of their memory from the minds of most of the residents of Earth-2. Their absence was not noticed for thirty years. 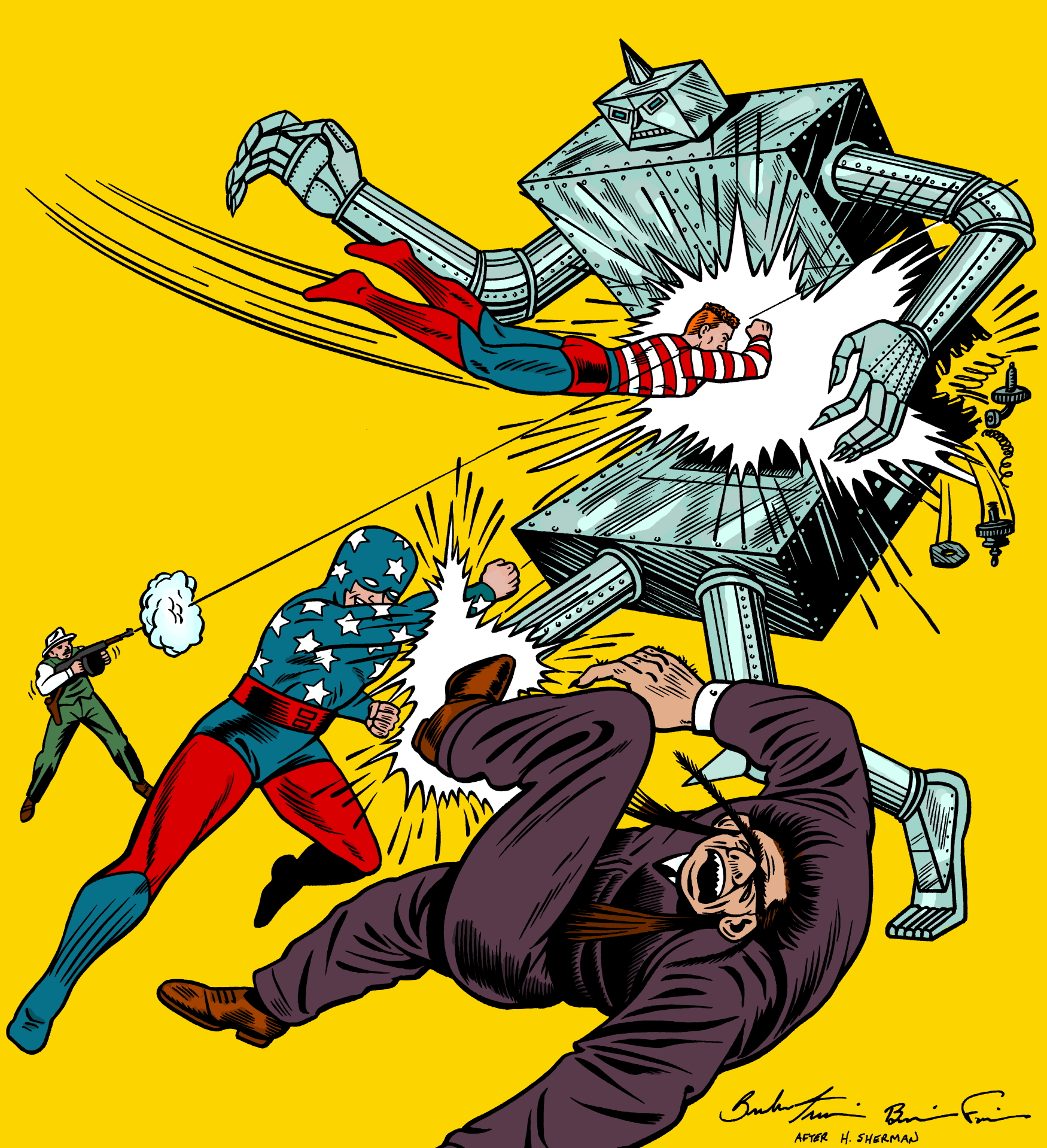 n the 1970s, the Iron Hand, one the SSV's original foes, designed a device, from technology left by the Nebula-Man, that created a gigantic "hand" of energy that surrounded and would eventually destroy Earth-2. This situation led the Justice Society of America to summon their Earth-1 counterparts, the Justice League of America. The JSA and JLA together consulted the Oracle, an extradimensional seer who revealed the fate of the Seven Soldiers of Victory. The JSA and JLA then split into teams to recover the time-lost SSV members. The Star-Spangled Kid had been thrown into the most distant past, arriving in Pleistocene Europe in the time of the Neanderthals. He was rescued a few weeks after his arrival (from his perspective) by Wildcat and the Earth-1 counterparts of Aquaman and Green Lantern. After retrieving all the heroes, the Seven Soldiers of Victory teamed with the JSA and JLA to recreate the device that had destroyed the Nebula-Man; working together, the three groups defeated the Iron Hand and his threat to Earth-2 (Justice League of America #100-102).

The Star-Spangled Kid found himself on Earth-2 in the 1970s, thirty years after his own time. He was apparently taken in by Starman, one of the older members of the JSA. When Starman was injured in an undisclosed case, he allowed the Star-Spangled Kid to use his cosmic rod while he convalesced. While filling in for Starman, the Star-Spangled Kid aided the JSA in battling the Brain Wave and Per Degaton; afterward, he was inducted into the JSA as a provisional member, part of a group called the All-Star Super-Squad (All-Star Comics vol. 1 #58). Pemberton then began an intense study of the Cosmic Rod's technology, improving it. Within a matter of weeks, he had created a belt he christened the Cosmic Converter (All-Star Comics vol. 1 #64) to coincide with his induction as a full-time member of the JSA (All-Star Comics vol. 1 #65).

In 1979, the Star-Spangled Kid, Wildcat, and the Huntress encountered the Strike Force, an elite criminal operation financed by its leader, Arthur Pemberton. Arthur Pemberton revealed himself to be Sylvester Pemberton's nephew, who was named heir to the Pemberton family fortune because of Sylvester's disappearance. The three heroes defeated the Strike Force, and after appropriate revelations, Sylvester Pemberton was reinstated as the true heir to the Pemberton fortune (All-Star Comics vol. 1 #70-71). Pemberton took a leave of absence from the JSA, returning only in special cases. In the early 1980s, the Star-Spangled Kid completely resigned his membership in the Justice Society to form a new group of younger heroes, Infinity Incorporated (Infinity Inc. #11).

Pemberton retained the SSK moniker and moved into leadership of Infinity Inc. throughout the 1980’s.  He financed the group using the Pemberton fortune and moved them to Los Angeles to operate out of a former movie studio.  During the Crisis on Infinite Earths, the Star Spangled Kid was an active participant but was presumably relegated to Earth-Two when the barriers between worlds resealed.  He was known to be a member of Justice Society Infinity (Justice Society of American Annual #1).  His current activities are unknown. 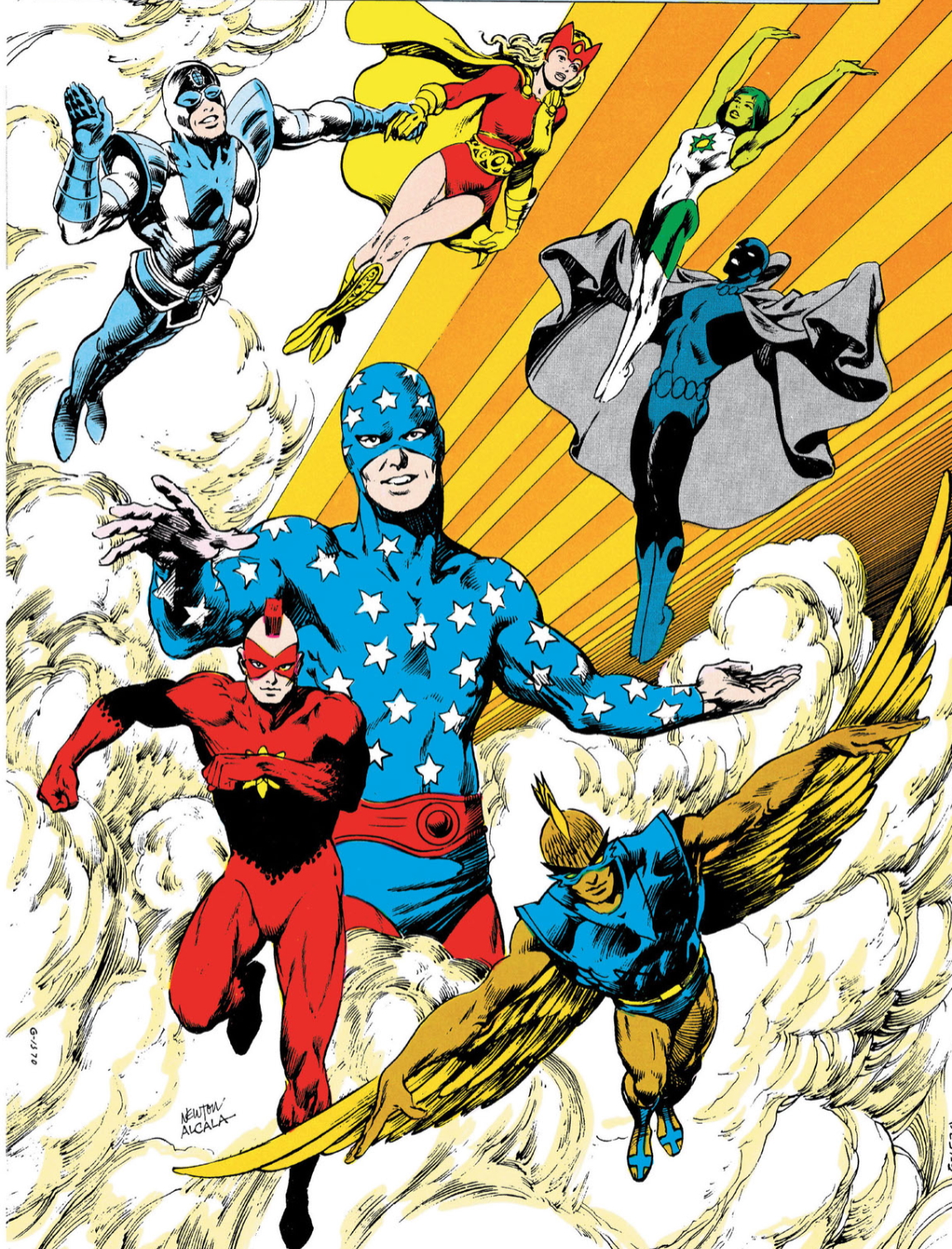 The Star-Spangled Kid, without his weaponry, is merely mortal and could be slain as such. 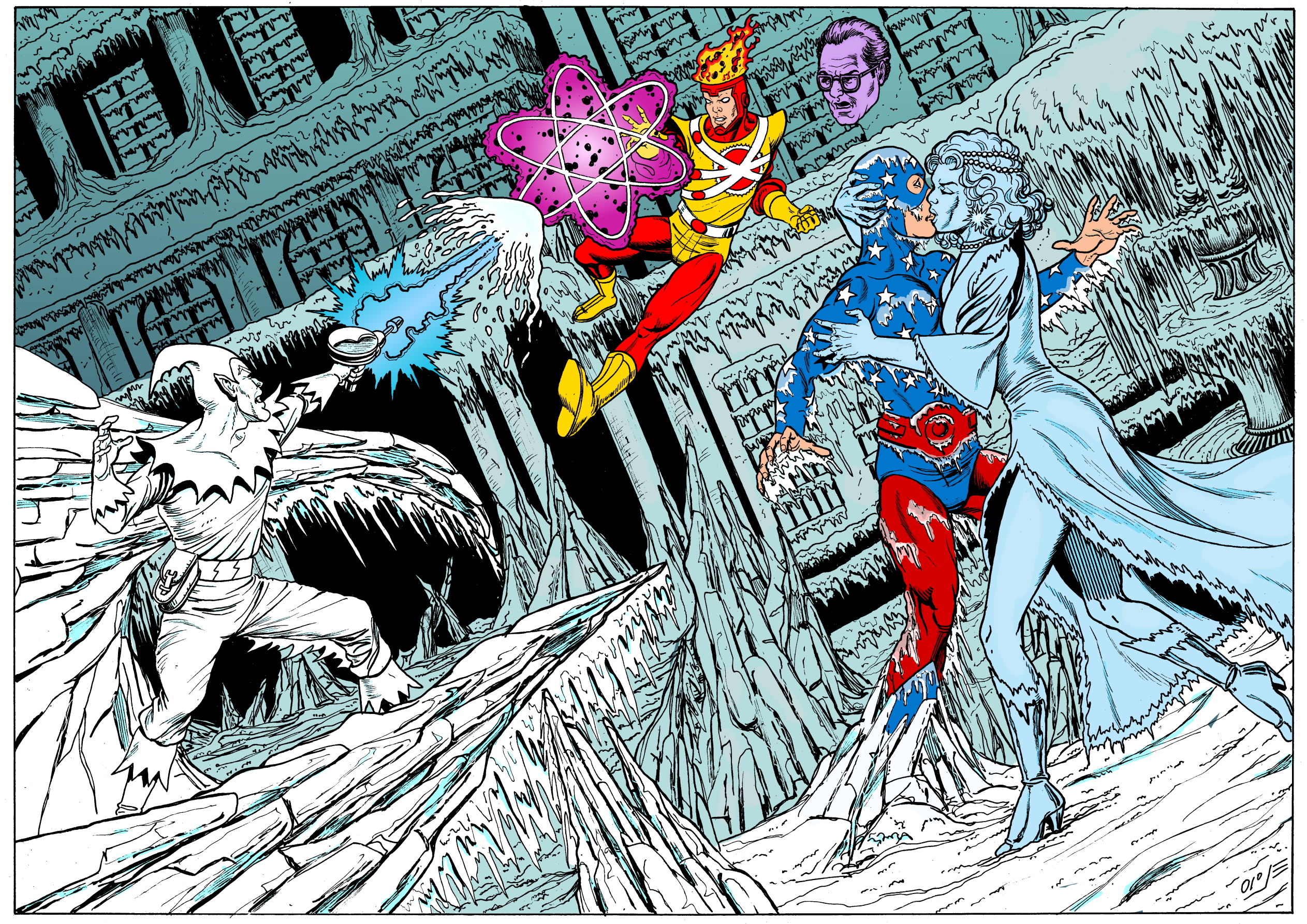