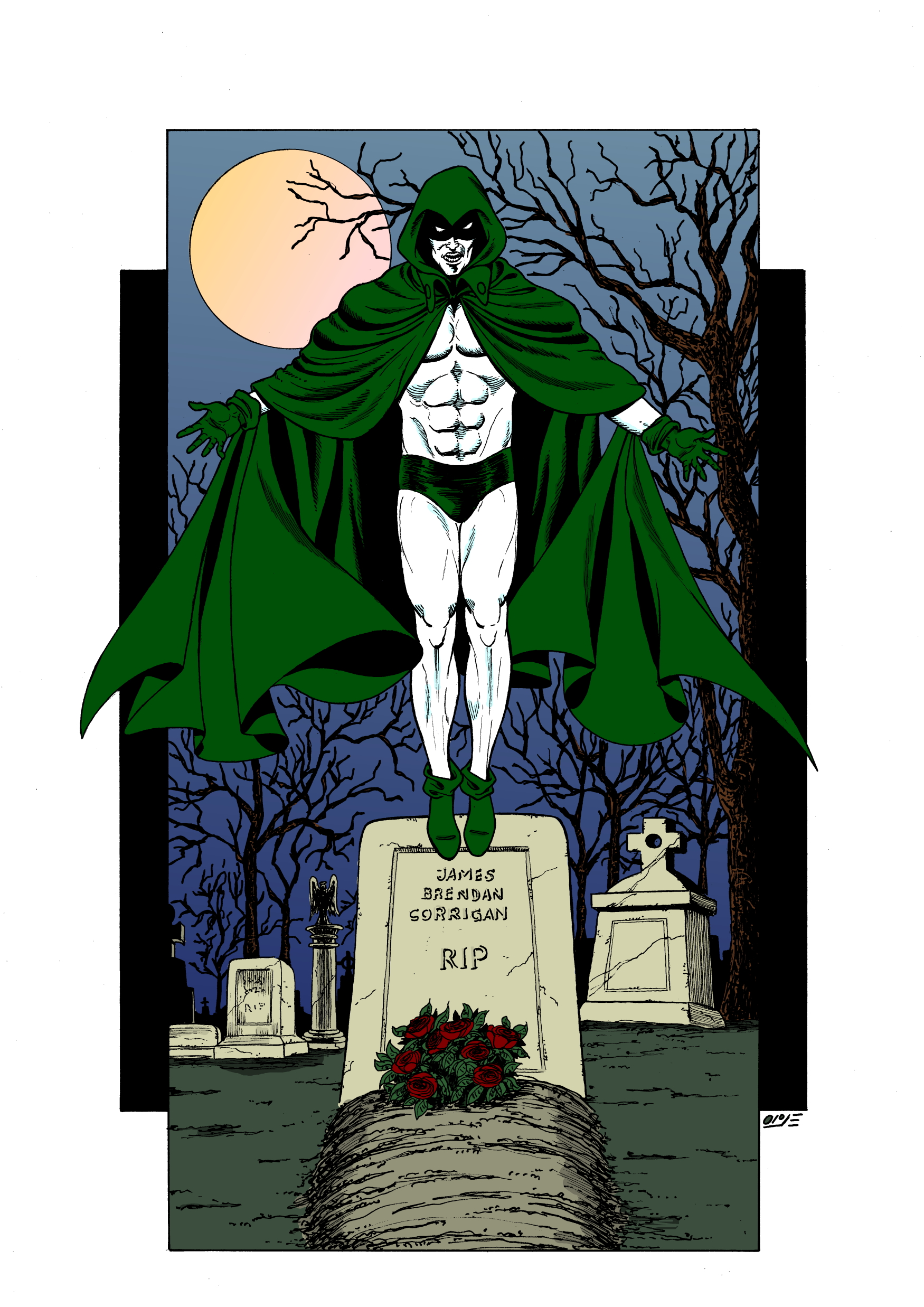 The Spectre is a fusion of two beings, the Spectre force and police detective Jim Corrigan. The Spectre force was formed in the distant beginning of human civilization, when humanity began to recognize and seek interaction with God. To communicate His occasional displeasure with humanity, God created a being imbued with a small portion of Himself to wreak His vengeance as required. This entity, literally the Wrath of God, became the Spectre. Early recorded acts of the Spectre include the destruction of Sodom and Gomorra, the humbling of the Egyptian pharaoh to allow the flight of Moses, and the destruction of the walls at Jericho. When Christ was born, the Spectre was cast into limbo, as God offered His forgiveness to humanity with the offering of His Son.

James Corrigan was a member of the New York City police department, working his way up to the rank of Detective. Corrigan made a gutsy rock-hard officer, but he also found love in the person of Clarice Winston, a wealthy heiress. The two were engaged to be married in late 1939. In the late 1930s, one of New York City's most notorious gangsters was a man named Gats Benson. Early in 1940, Corrigan had developed a personal vendetta against Benson, vowing his capture. In early spring, Louis Snipes, a common police informant, gave Corrigan an inside lead on a Benson hit at a local warehouse. When Corrigan arrived, he was clubbed unconscious and taken to a hideaway near the Hudson River. Benson confronted Corrigan there, swearing vengeance for Corrigan's past interference. Under his orders, Benson's men bound Corrigan in a 55-gallon barrel and filled it with a quick-drying cement. They then sealed the drum and threw it into the river. Corrigan choked to death on the cement before the barrel had reached the river's bottom.

As he died, Corrigan's soul journeyed to judgment. Confronted with the reality of his demise, Corrigan was enraged and cursed both his fate and those who had allowed it. When he was judged, Corrigan was deemed unfit for Heaven and undeserving of Hell. It was decided that he would be the recipient of the Spectre force. The Spectre force's purpose at the time was to avenge innocent blood, but it required a mortal host to maintain a "human" perspective. Corrigan became that host. 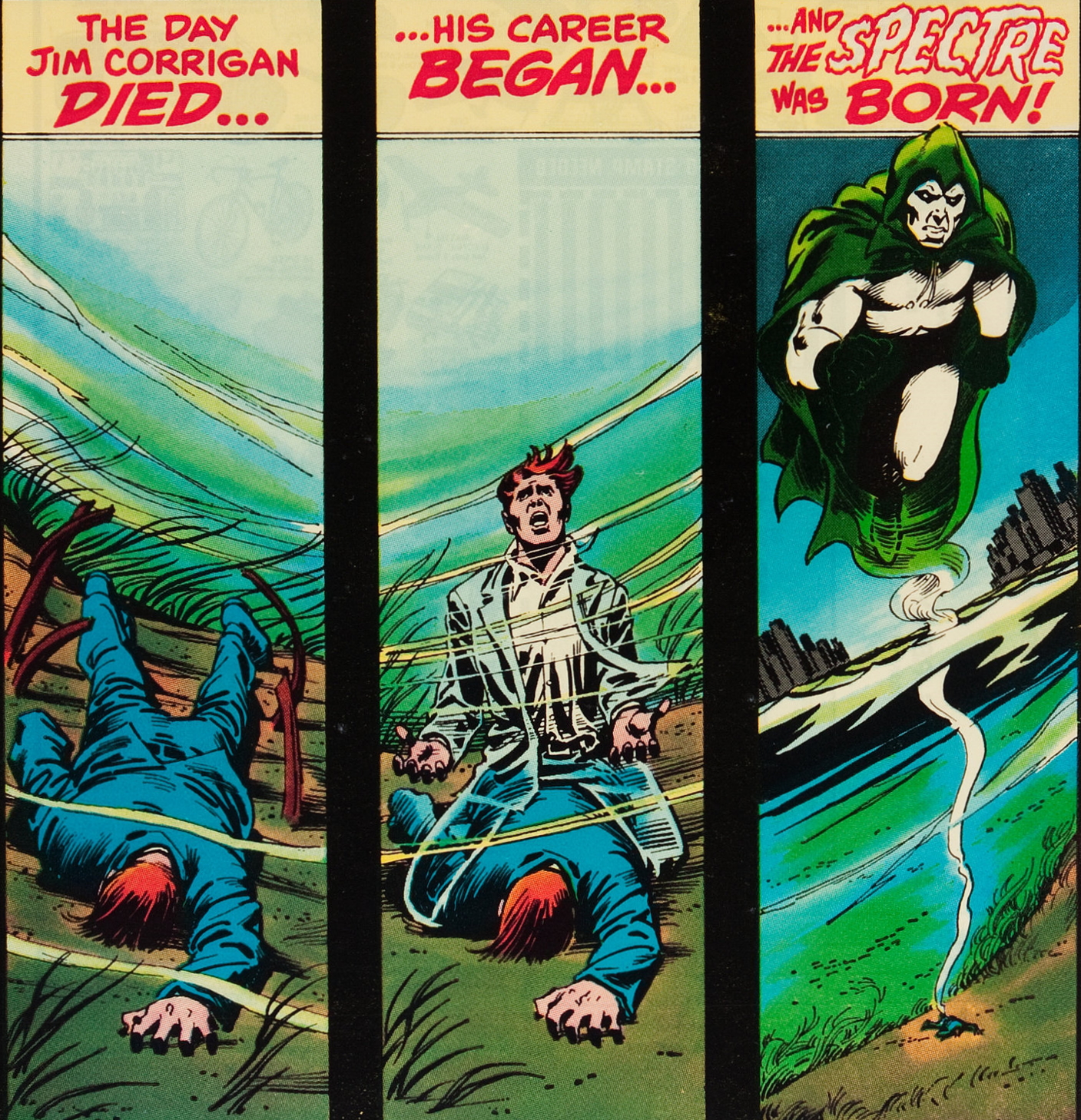 Upon returning to the mortal plane, Corrigan found himself among Benson's men again. Bolstered by Corrigan's death, the gangsters were torturing Clarice Winston when Corrigan returned to the scene. Infuriated that his men had seemingly failed, Benson demanded Corrigan's immediate execution. Inflamed by the innocent blood on the hands of the gunmen, the Spectre force lashed out, inflicting each with an agonizing death. In the firefight that followed, a stray bullet struck Clarice Winston, mortally wounding her. As her soul left her body, the Spectre force pursued it and wrestled it back to the material plane. Clarice was restored to life but Corrigan, acutely aware of his undead nature,  ended his engagement with Winston and returned to life as a New York City Police Detective.

Over the initial weeks after his death, Corrigan became acquainted with the Spectre force. In the beginning, Corrigan grew more detached from his former life, ending his partnerships in the force and spending nights wandering the streets of New York.  His encounters let him to supernatural encounters with entities like Zor, Xnon and Kulak.  Over time, Corrigan developed a calmer, more human relationship with the Spectre.  In the department, Corrigan became acquainted with a beat cop named Percival Poplaski (More Fun Comics #74). Simple but sincere, Poplaski provided a compassionate perspective to the hard-nosed Corrigan. Inspired by the mystery men of the day, Poplaski encouraged Corrigan to adopt a heroic identity, the Spectre, in order to preserve his human identity from the media attention generated by the Spectre force's pursuit of justice. As the Spectre, Corrigan occasionally rescued Poplaski from seemingly impossible cases. Quietly, Corrigan allowed the humble man an undue share of the credit, giving him the nickname "Percival Popp, the Super-Cop" . 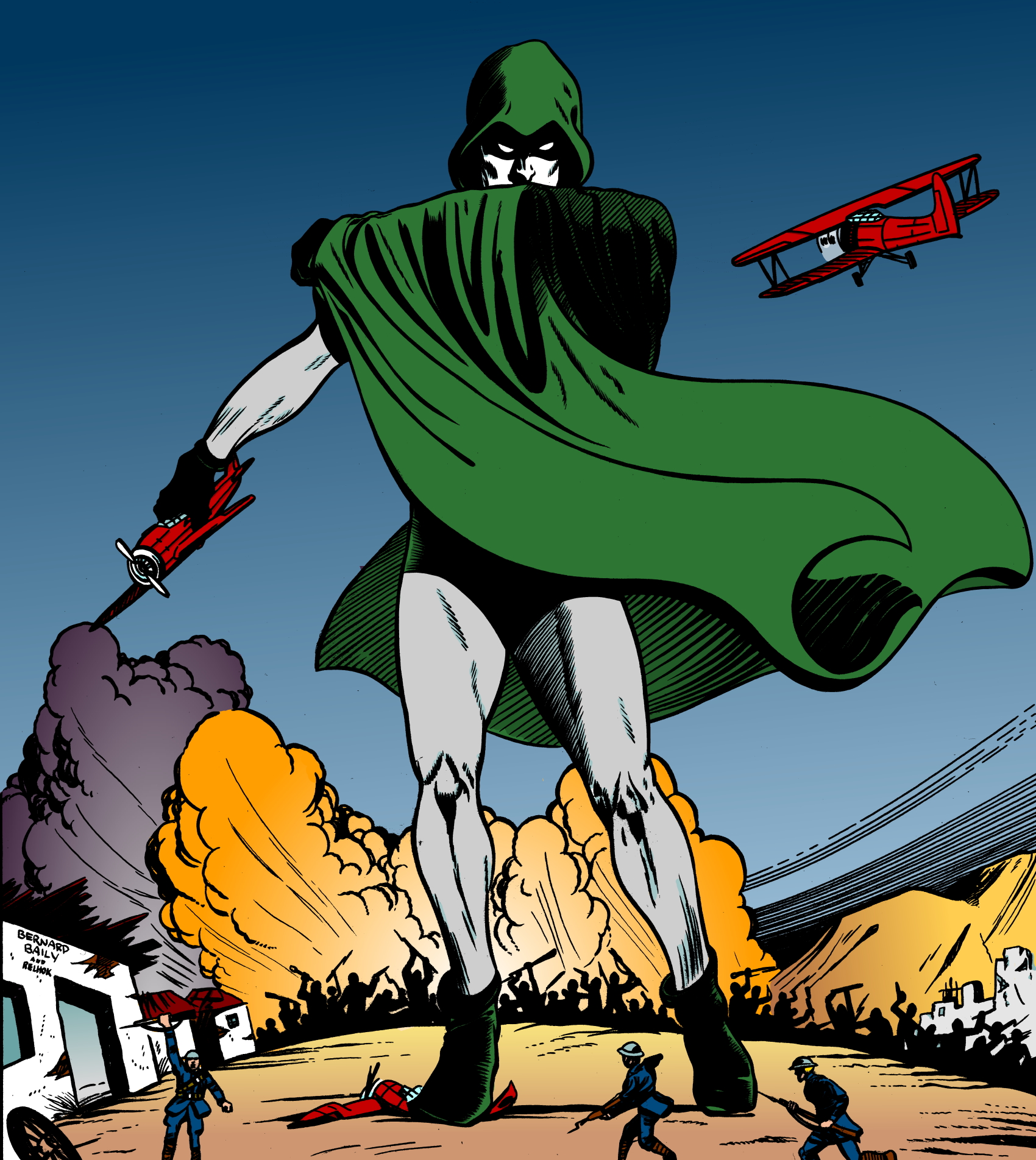 In late 1940, Adolph Hitler acquired the Spear of Destiny, an ancient artifact supposedly used to pierce the side of Christ on Calvary. Emboldened by the possession of such a powerful object, Hitler planned a full-scale invasion of the British Isles. Several costumed mystery-men intervened at the request of the American government, and the Spectre was summoned by Doctor Fate to provide assistance on the English shore near Dover. In a scene which is the stuff of legend, the Spectre expanded to enormous proportions and waded through the English Channel, capsizing the invading vessels. His capture and execution of Wilhelm von Krupp, leader of the invasion fleet, ended the assault. When Hitler sent Valkyries to assassinate President Franklin D. Roosevelt, the Spectre joined the assembled heroes in defeating the Valkyries. When Roosevelt suggested the formation of the Justice Society of America, the Spectre became a charter member (DC Special #29). The Spectre also affiliated himself with the loose organization of heroes known as the All-Star Squadron, formed in late 1941.

Throughout World War II, the Spectre was an active member of the Justice Society pursuing justice on the home front. Hitler and his Japanese counterparts had erected a "Sphere of Influence" that prevented the Spectre and other heroes from venturing into Axis territory to combat the Nazis. The power of the Sphere of Influence originated from spells cast using the Spear of Destiny and the Holy Grail (All-Star Squadron #4). In 1943, God granted Corrigan a form that was human enough to pass an army physical and allowed Corrigan to go to officer training school. The Spectre was allowed to remain relatively independent for long periods of time, albeit invisibly, and looked after the hapless Poplaski (More Fun Comics #90). 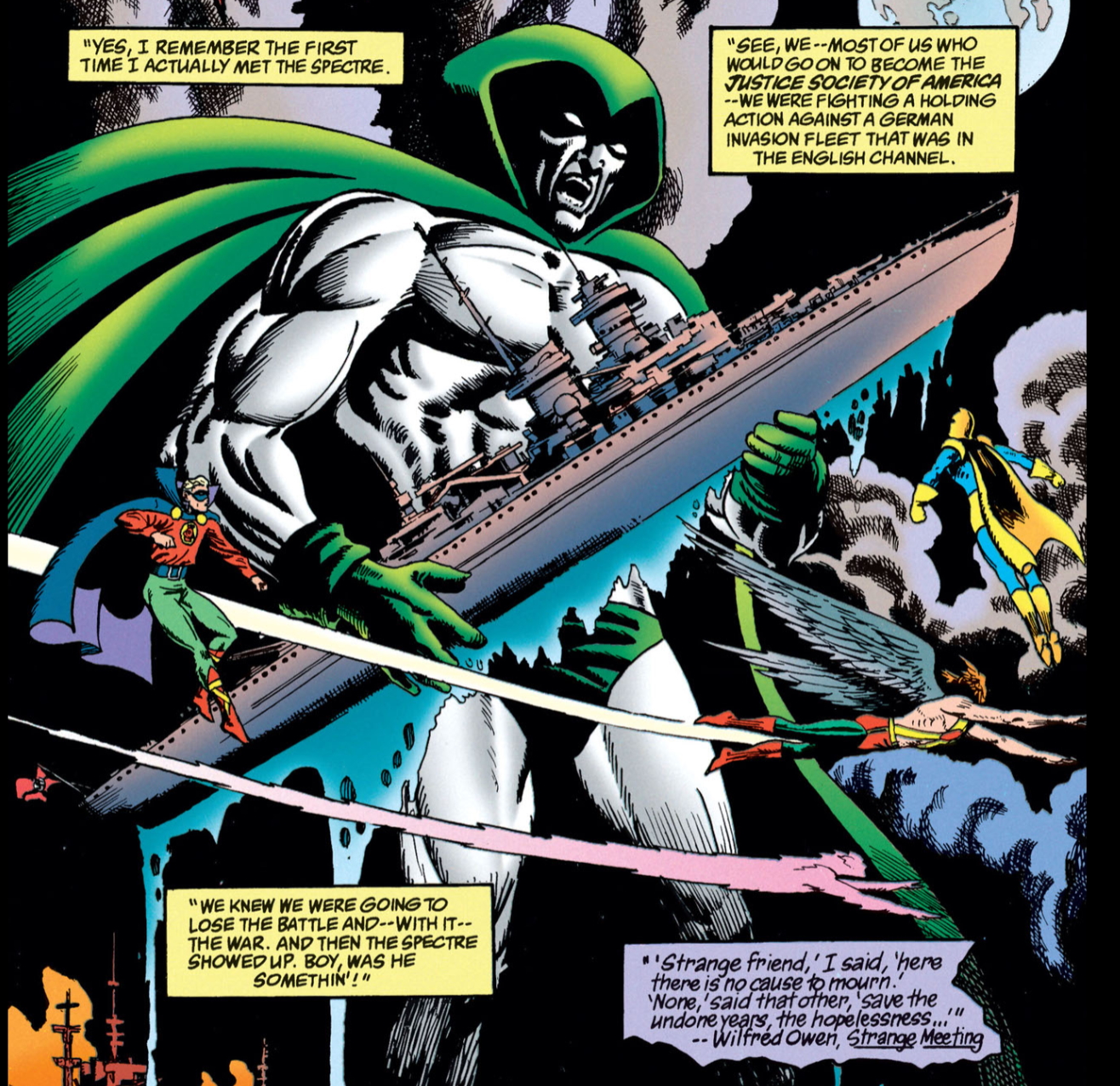 Shortly afterward, the Spectre first encountered his most ferocious adversary, Azmodus. The two battled across Limbo and Reality to a stalemate, when a spell of psychic amnesia cast by Azmodus engulfed them both, capturing Azmodus in the form of a man and the Spectre in the form of Jim Corrigan. Both forgot their supernatural natures and Corrigan used his officer training to advance his career in the police force. At some point Corrigan moved from New York to Gateway City, where he eventually reappeared. Azmodus was trapped in a separate body, and had also forgotten his true nature. The host body entrapping Azmodus died, and he returned to his true state. Rueful of his previous defeat, Azmodus fled to the astral plane to gather his power.

By 1964, Jim Corrigan was a detective with the rank of captain the Gateway City Police Force. He was following the case of Millicent Olcott, an heiress whose eccentric benefactor had hidden his wealth, when Olcott used a psychic medium to help find the money. Contact with the medium reawakened the Spectre, dormant inside Corrigan. After a brief effort to assist Olcott, the Spectre determined to find the source of his 20-year imprisonment. The Spectre's search led him to a man named Paul Nevers, the new host body for Azmodus. Corrigan fought Nevers on the earthly plane while the Spectre battled Azmodus on the otherworldly plane. The Spectre defeated Azmodus and locked the demon in a plane of limbo from which he could presumably never escape. Azmodus warned the Spectre that the plan he had set in motion would continue without him (Showcase #60). In a deal he created with Shaitan, Azmodus's battle with the Spectre had weakened the barrier between the astral plane of Dis and the world of the living. By securing shadows from various humans, Shaitan completed the rupture and moved on the material plane. The Spectre thwarted Shaitan, too, and banished him back to Dis (Showcase #61). 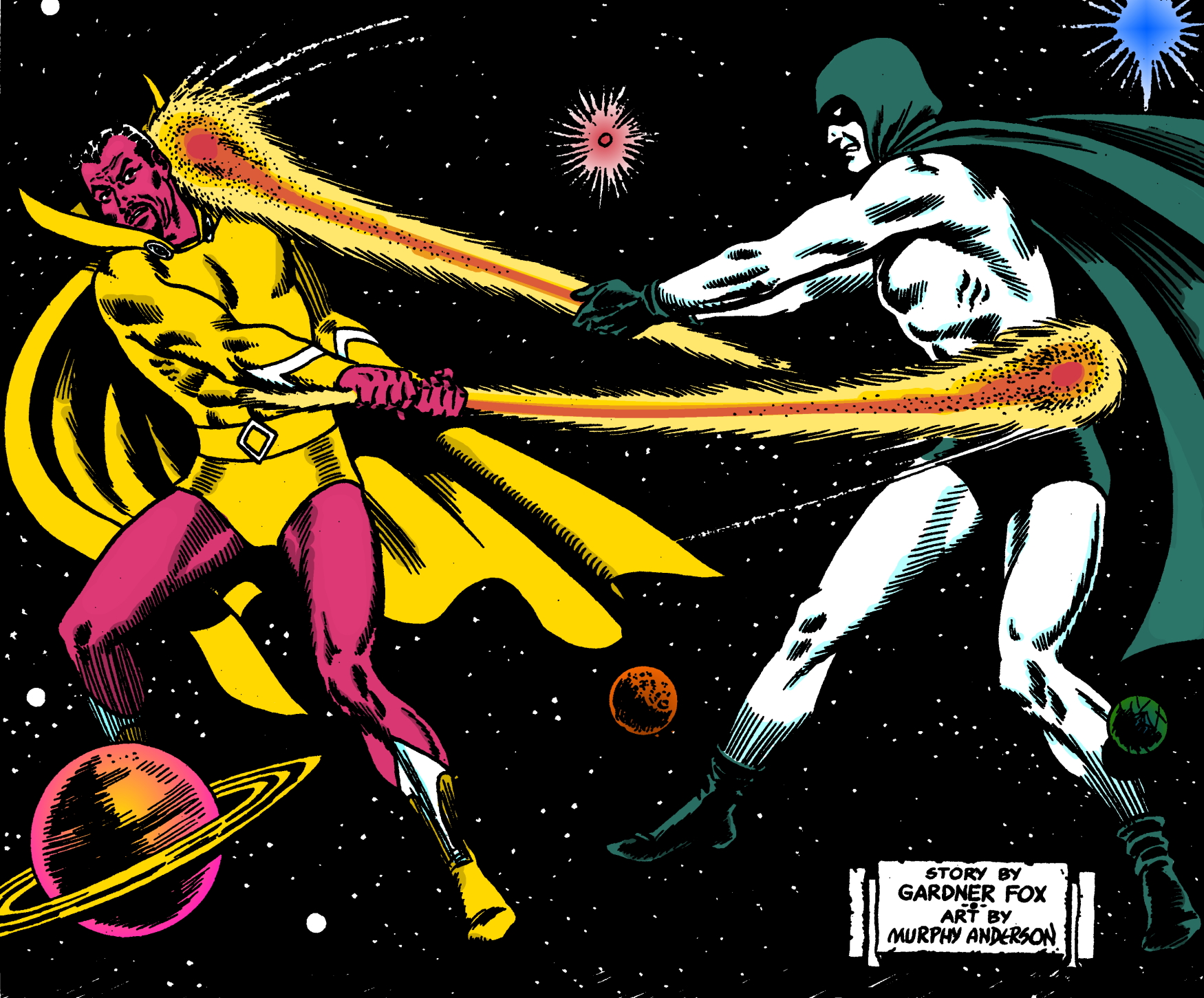 Over time, the relationships between Corrigan, the Spectre, and God have changed. During the 1960s, Corrigan was the dominant force; the Spectre's thirst for vengeance was lessened. The Spectre had limited contact with the JSA, participating in only one joint case with the Justice League of Earth-1 (Justice League of America #46-47). He dealt primarily with material crimes and confronted costumed criminals like the Psycho-Pirate (The Spectre vol. 1 #8). Sometime in the late 1960s, the Spectre became a separate entity from Jim Corrigan and was entrapped in a tomb. When the alien Creators threatened to destroy Earth-2, the Spectre was summoned from the crypt and presumably destroyed, preventing the collision of Earth-1 and Earth-2 (Justice League of America #83). Jim Corrigan was presumably allowed to live out the rest of his life in peace, and appeared much older when he resurfaced in the mid-1970s (All-Star Comics #70).

The Spectre, however, had not been destroyed. He had been transported to Earth-One, where he was bound to the Jim Corrigan of that world. The Spectre returned to his "truer" form, a spirit of vengeance. His pursuit of criminals almost invariably resulted in their particularly gruesome demise (Adventure Comics #431-440). By the 1980s, the mission of the Spectre had changed again, leaving him functioning at the level of minor god, acting to preserve the cosmic balance of good and evil rather than addressing the cries of individual spilled blood (Swamp Thing vol. 2 #50, Swamp Thing Annual #2, DC Comic Presents #29). The Spectre still retained some relation to Jim Corrigan, however, since this form was attacked by the renegade Thunderbolt in the early 1980s (Justice League of America #219-220). His ultimate challenge in this form came in his struggle to defeat the Anti-Monitor during the Crisis on Infinite Earths. The Spectre ultimately prevailed in his part of the struggle but was left in a comatose state (Crisis on Infinite Earths #10).  His activities on Earth-Two after these events are unknown, tho he made his presence known in the early 21st century following an incursion from Earth-0 (JSA #20). 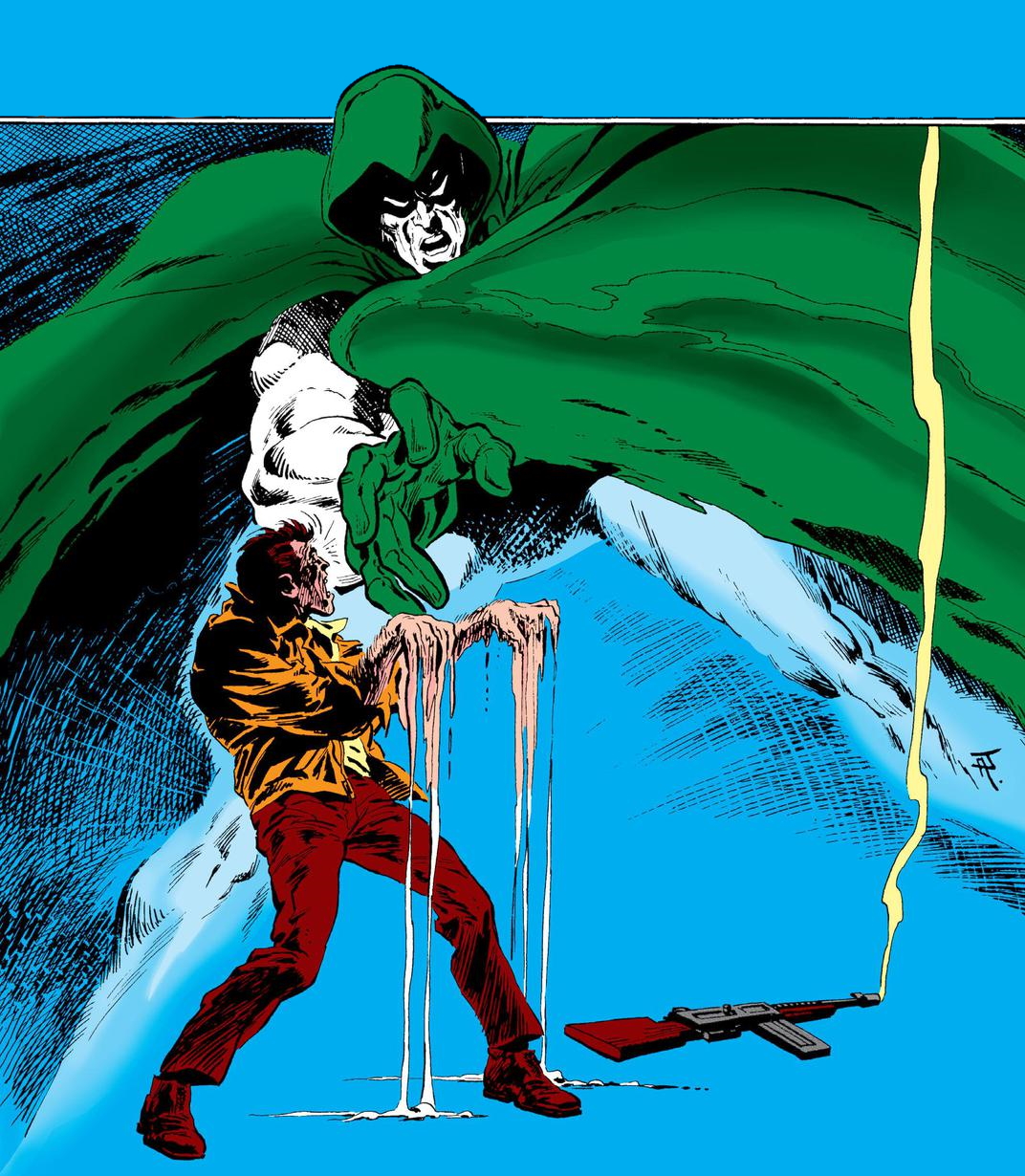 The Spectre's power level has varied wildly over the years, but his powers are considerable in any case. As a spiritual entity, the Spectre cannot be slain in the conventional sense, though he can be dispelled or neutralized . Since the 1970's, the Spectre became more and more distant from humanity, functioning on the level of cosmic entity.   His current connection to humanity as manifest on Earth-Two is unknown.

The Spectre can be injured or even slain by sufficient magic, or by magical instruments such as the Spear of Destiny.  He obviously serves at the pleasure of The Creator who can recall him or constrain him at any time. 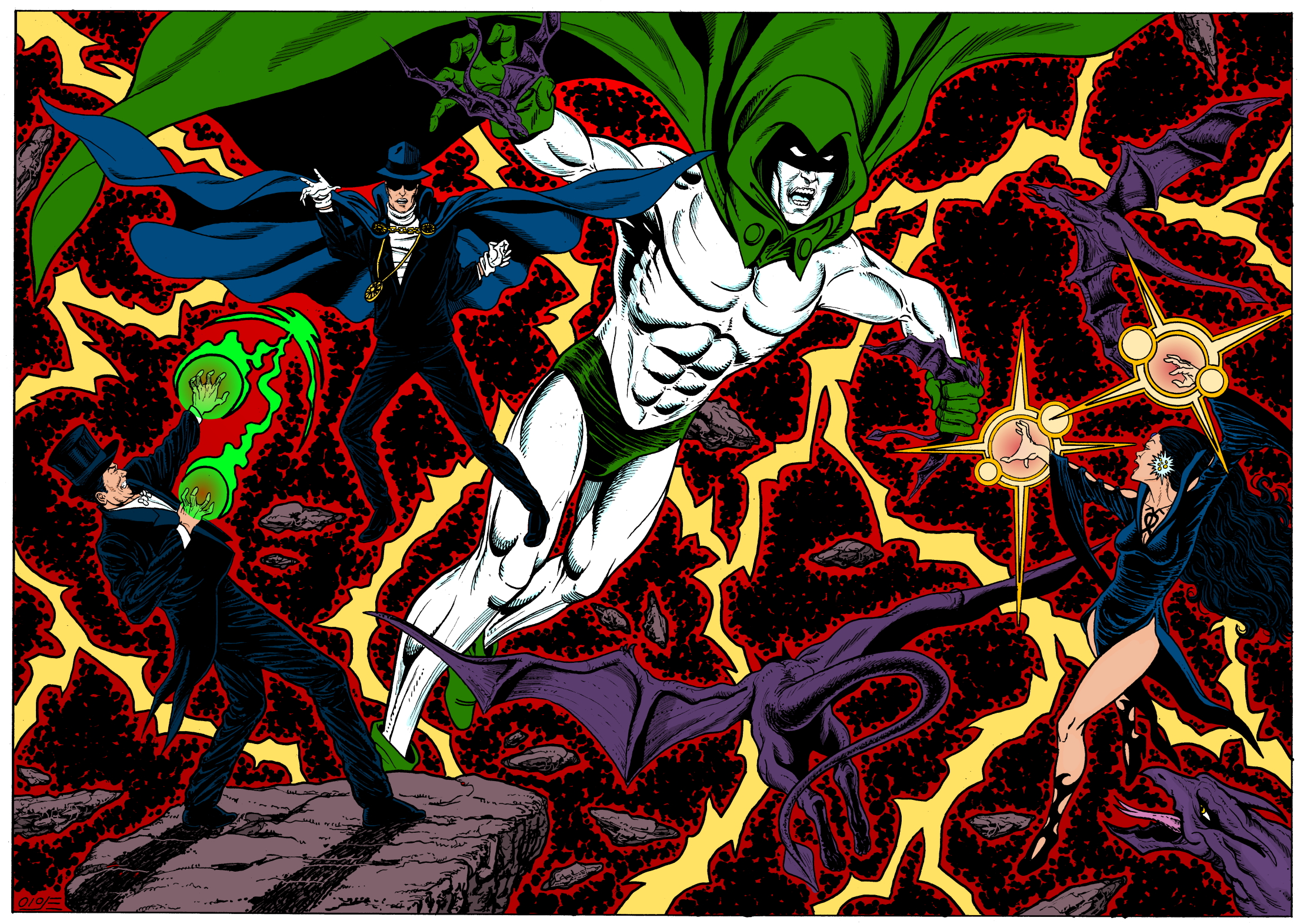 Golden Age Appearances of  The Spectre

Post-Golden Age Appearances of the Spectre