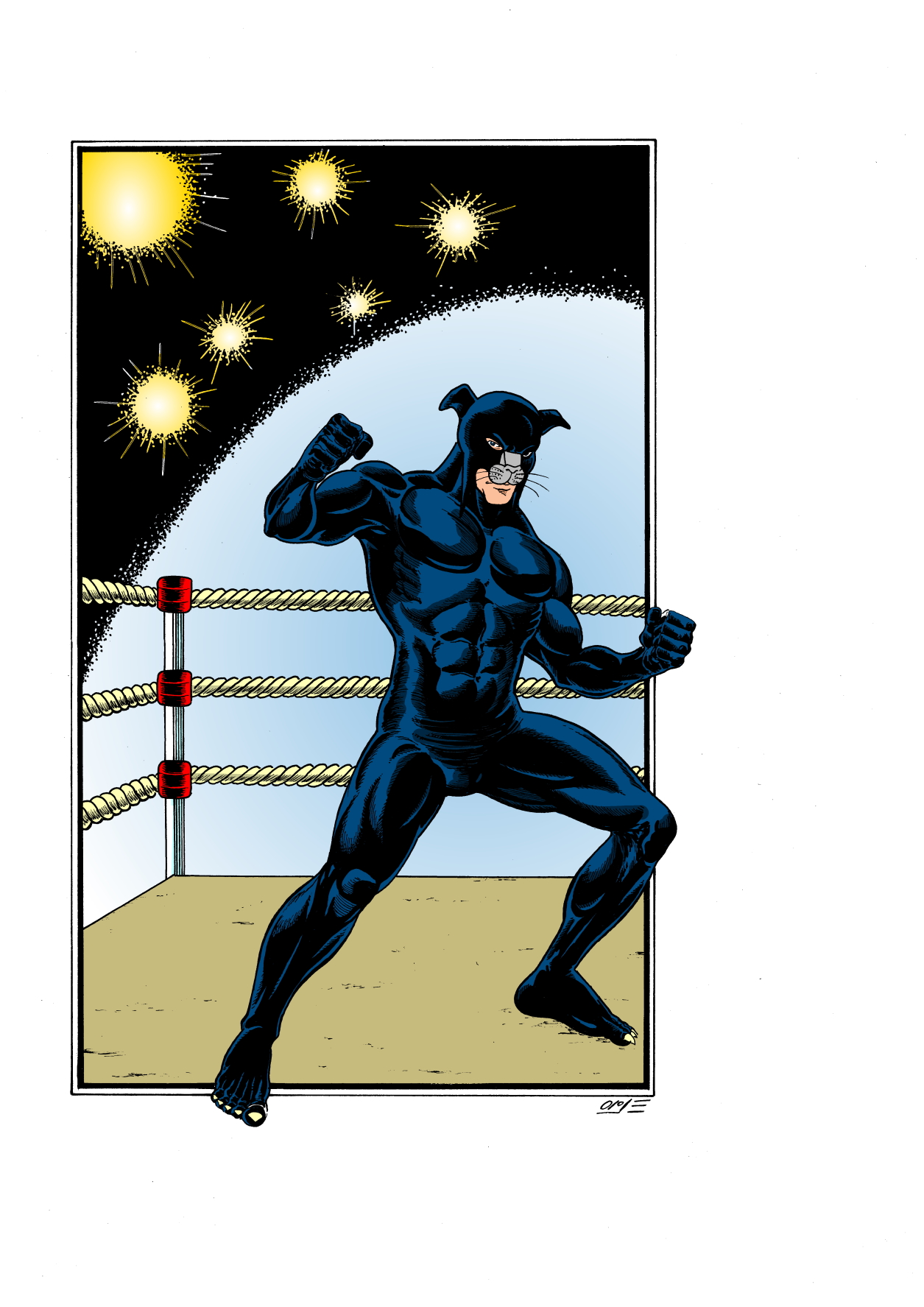 Ted Grant was probably born in the 1910s, the son of Henry Grant. Henry Grant had been a frail child and swore on the birth of his son that the boy would not suffer those same frailties. Throughout his childhood, Ted was trained in all manner of athletics. Of all the sports, however, Ted excelled most in boxing. When he graduated high school, Ted did not pursue a boxing career but went to college, his goal to study medicine. He took part in the college boxing team part-time, however, to keep in shape. His coach was Joe Morgan, a former championship boxer (All-Star Squadron Annual #1). Halfway through college, Grant's father died, and his father's debts consumed whatever savings he had. Unable to continue in his studies, Grant left school and tried to find gainful employment. Unfortunately, the pre-World War II American economy was unkind to Grant, and he failed repeatedly to find gainful work. One night, he happened upon two muggers assaulting a famous boxer, "Socker" Smith. With Grant's help, Smith overcame the assailants, an act which earned Grant Smith's gratitude. Grant joined Smith as a professional boxer under the management team of Flint and Skinner and proved himself championship material. He later became the undefeated heavyweight champion boxer.

In 1941, Flint and Skinner decided to improve their revenues from the gambling circuit by fixing a championship bout between Grant and Socker Smith. They placed a needle containing a sedative in Grant's boxing glove, assuming that a hard blow from Grant would inject the sedative and knock Smith out. Flint, however, overdosed the needle; when Grant struck Smith, the older boxer was killed from the overdose. Grant was arrested, but his implicators feared he would reveal incriminating evidence to the police. They arranged an "accident" in which the car carrying Grant was forced over an embankment, and the police officers (and presumably Grant) were killed. Grant survived but was blamed for his own "escape." A fugitive from justice, Grant wandered aimlessly, trying to think of a way to clear his name. He happened upon a small child who had been robbed of comic book that featured Green Lantern. Unfamiliar with mystery-men, Grant listened as the child described the popular hero. Inspired by Green Lantern, Grant fashioned a costume imitating a large black cat, and took the code-name of Wildcat. As Wildcat, Grant tracked Flint and Skinner to their hideouts and forced each of them to confess. He then turned himself in as Grant after bringing the two criminals to the law as Wildcat. Satisfied by the justice that he had delivered as Wildcat, Grant vowed to continue on as the feline mystery-man (Sensation Comics #1). As Ted Grant, he remained a professional sports figure and strove to become a personal role model for disadvantaged children. 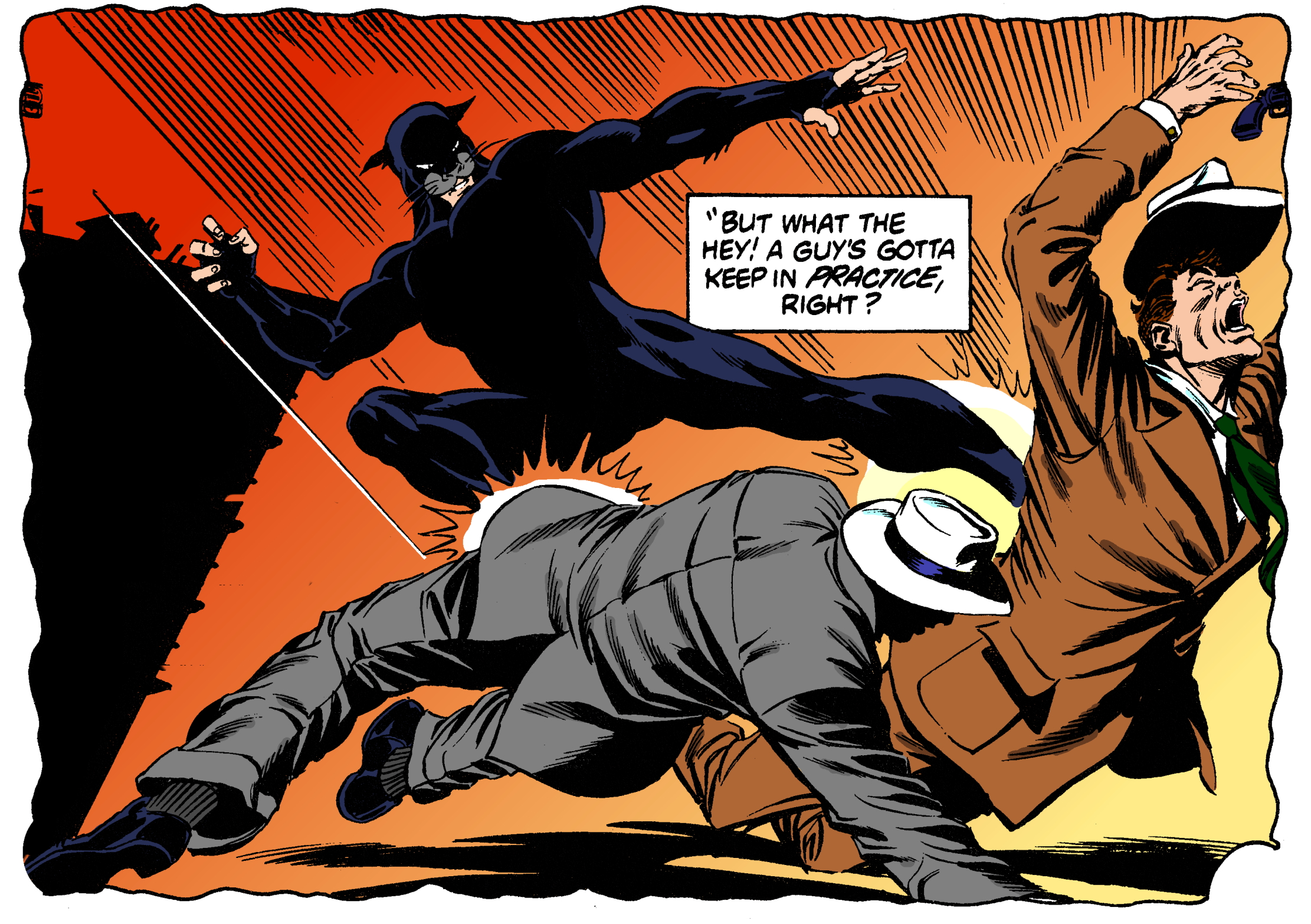 As was the habit of the time, Grant picked up a Man Friday in the form of Hiram "Stretch" Skinner (Sensation Comics #4) of Corn Corners, Iowa. Skinner (no relation to the original Skinner) was a private investigator, allowing Grant access to a certain amount of casework as an occasional tagalong and frequent rescuer of Skinner. The lanky detective was something of a yokel, never quite grasping that Grant and Wildcat were one and the same. Nevertheless, the two were an effective team throughout World War II. Skinner's ultimate fate is unknown.

During World War II, Wildcat was a member of the loosely-organized All-Star Squadron. Early in 1942, Wildcat was accosted by a mystical being who had taken the form of Joe Morgan, the boxing champ who had trained Grant in his college days. Morgan had been victimized by an alien radiation that had split him into three magically-powered entities and provoked him to seek vengeance against Grant. As Wildcat, Grant was intercepted by All-Star Squadron members Green Lantern, the Flash, and Wonder Woman, from whom he learned that Morgan had attacked two others, the Atom and the Guardian. The Guardian, the Atom, and Wildcat had all trained with Morgan, but each had sworn off professional athletics to pursue other interests. The trio ultimately confronted Morgan and defeated him with the help of the All-Star Squadron. After his defeat, Morgan regained his senses and begged forgiveness of those he had assaulted. As the alien radiation fled his body, Morgan died at the side of his former pupils (All-Star Squadron Annual #1). 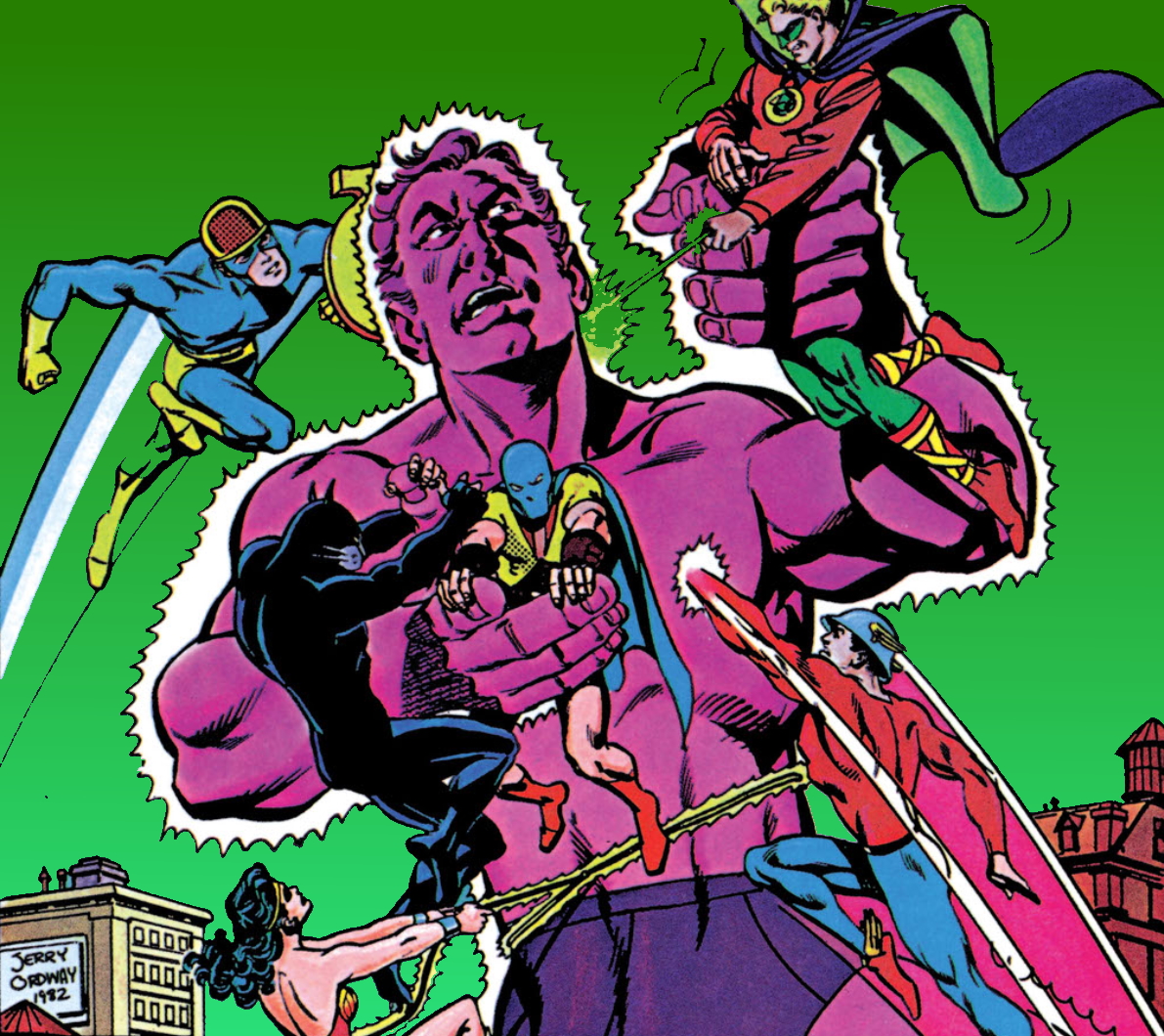 In the latter part of World War II, the Justice Society contacted Wildcat to help with a case involving a disillusioned youth who wanted to avoid service in the war (All-Star Comics #24). He was also contacted shortly after the war to help promote public acceptance of disabled veterans (All-Star Comics #27). At or around this time, Wildcat was awarded full membership in the Justice Society.

While most of Wildcat's adventures resulted from Skinner's hired casework, he did encounter the occasional super-villain. Notable among these was the Yellow Wasp (Sensation Comics #20, 25, 66). The origins of the Wasp are unknown, though his appearance was certainly alien. Whether this was a function of his physical condition or various appliques is uncertain. The Wasp employed a variety of insect motifs in his crimes, such as stinging poisons and waxy adhesives. The Wasp's main goals were robbery and the acquisition of material gain, but he was largely foiled by Wildcat and Skinner.

Without a doubt, one of Wildcat's most ambitious foes was the Huntress. A former heroine known as the Tigress turned professional thief, the Huntress resented the way criminals were tracked by the law and resolved to turn the tables. She created a private zoo and captured Wildcat, as well as many local politicians, to serve as game in her own private hunt. Wildcat escaped her traps and defeated the Huntress, sending her to prison (Sensation Comics #68). After several individual forays against Wildcat (Sensation Comics #69,71,73,74,76, unpublished Golden Age story in DC 100-Page Spectacular #6), the Huntress joined the Injustice Society of the World (All-Star Comics #41). There she met "Crusher" Crock, also known as the Sportsmaster with whom she ultimately became romantically involved. Whatever her criminal activities, the Huntress became a regular inmate in any of several federal penitentiaries.

Wildcat had already entered a period of retirement before the House Un-American Activities Committee meetings in 1951 disbanded the JSA. Grant also retired from boxing some years later, an undefeated heavyweight champion. Grant returned to active duty as Wildcat when he joined Starman and Black Canary against the newlywed criminal duo of the Huntress and the Sportsmaster (Brave and the Bold #62). When the JSA reformed, Wildcat resumed his membership with the Justice Society in the mid-1960s (Justice League of America #46).

In the 1970s, Wildcat was severely injured by the Icicle when the Injustice Society seized control of the JSA's headquarters (All-Star Comics #65). This caused brain damage to an unknown extent, which was worsened when Wildcat was poisoned by the Thorn (All-Star Comics #72). He was successfully treated and seemed to return to normal after a period of recovery. Wildcat later resigned from the JSA to return to his gym and become a child welfare advocate (Adventure Comics #464). Within a year or two, Wildcat had returned to the active ranks of the JSA (Infinity Inc. #1). During the Crisis on Infinite Earths, Wildcat answered the call to duty, but in a storm brought on by the rogue Red Tornado, he was struck by lightning and crippled (Crisis on Infinite Earths #5). His goddaughter, Yolanda Montez, used the mutant powers bestowed on her by the criminal Dr. Love to become the new Wildcat (Crisis on Infinite Earths #6).  The subsequent activities of the Earth-2 Wildcat are unknown. 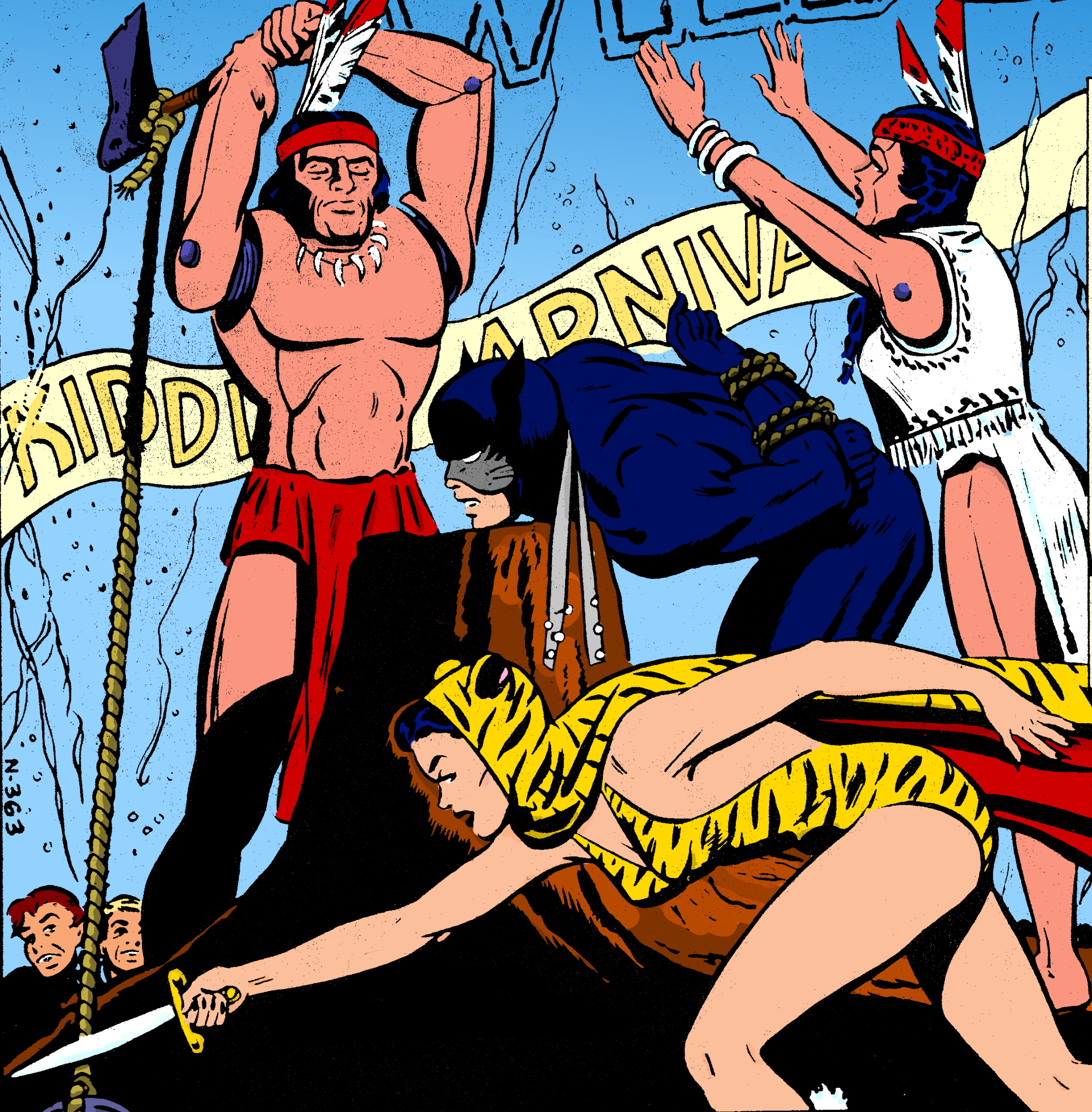 Wildcat is an extremely talented pugilist and the product of decades of specialized training in that fighting style. A former heavyweight champion, Wildcat has relied completely on this method of operation.

Despite his skills, Wildcat is a mortal and could be injured and slain as such.

Post-Golden Age Appearances of the Wildcat of Earth-Two