The Ultra-Humanite represents one of the most significant threats to 20th century incarnations of the Justice Society. The origins of the super-criminal known as the Ultra-Humanite are shrouded in mystery. Even he claims not to remember his true name or appearance and attributes his vast intellect and mental prowess to scientific experiments of an unknown nature.

He was first encountered in 1939 when he masterminded a protection racket through ganglord Jackie Reynolds. Reynolds organized unscrupulous cab drivers into a union, the Cab Protective League. Reynolds' union, financed by the Ultra-Humanite, intimidated other cab drivers through violence and threats of against passengers. In the summer of 1939, a cab carrying Clark Kent was assaulted by a CPL driver. The incident led Superman to investigate Reynolds activities, and by extension, discover the Ultra-Humanite. The criminal was a crippled old man and claimed to be the source of many illegal operations across the nation. When Superman moved to intercept the crimelord, he was felled by strong jolt of electricity. An attempt to execute Superman with a buzzsaw failed when the blade shattered against Superman's invulnerable body and impaled itself in Reynolds' throat. Leaving Superman to perish in flames, the Ultra-Humanite escaped in a special airplane. Escaping the burning shack, Superman destroyed the plane's propellers, allowing it to crash into the ground. To his surprise, Superman found no evidence of his foe's body (Action Comics #13). 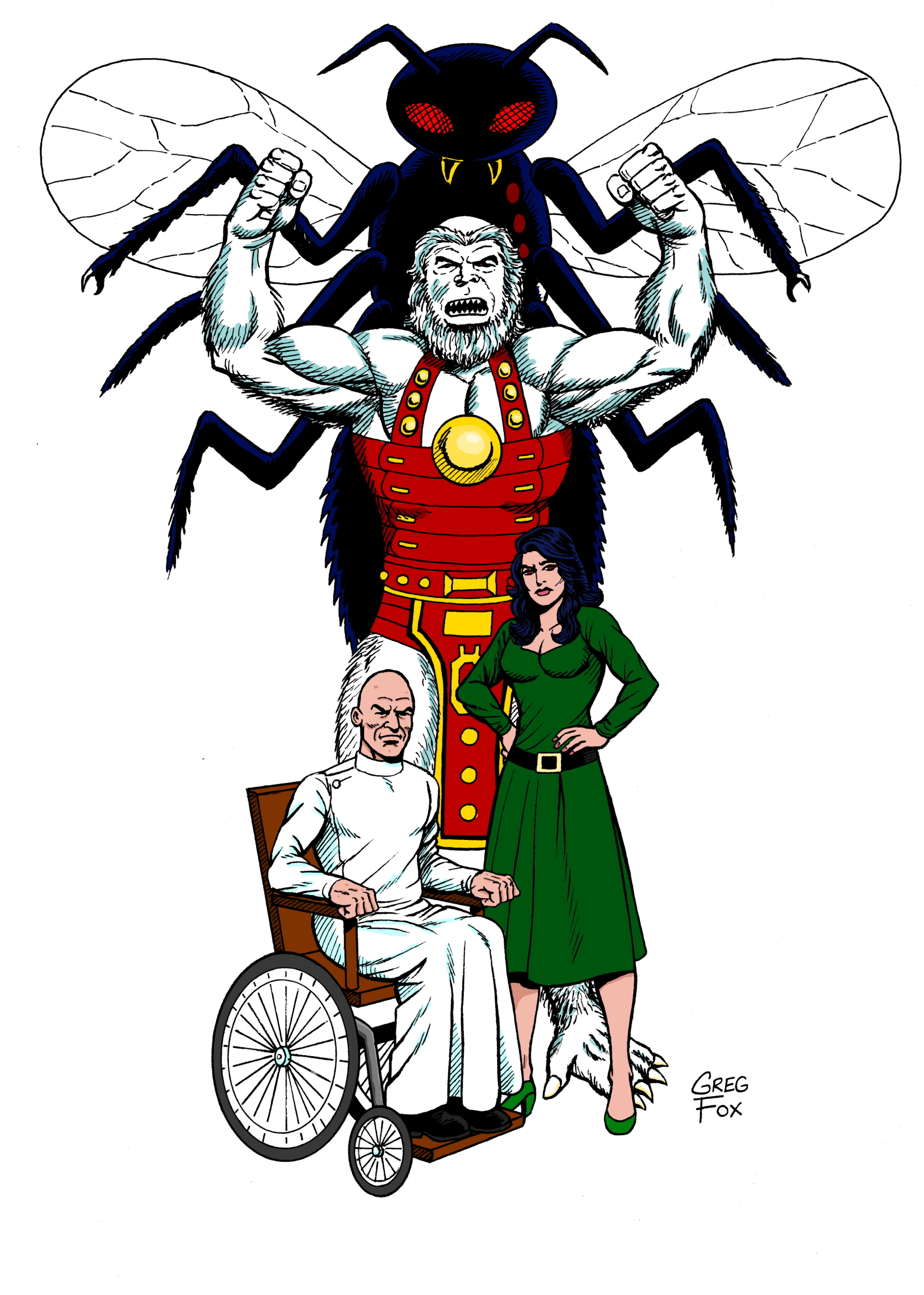 The world had not heard the last of the Ultra-Humanite. The villain was indeed nearly dead when abandoned by Superman but the swift arrival of his henchmen saved him. Following explicit instructions left by the Ultra-Humanite, criminal surgeons preserved the crime-lord's brain until they had found a suitable host. Racing time, the villains intercepted up-and-coming actress Dolores Winters. The actress was then slain and her brain replaced with that of the criminal Ultra-Humanite.

When a celebrity gala was held on board the cruise ship Sea Serpent, Dolores Winters was among the honored guests. When the ship was out of reach of shore, the criminal revealed his/her true plans; to ransom the celebrities for $5,000,000. When the ransom is raised, Superman followed the Ultra-Humanite's henchmen after they pick it up. Tracking the kidnappers to an air-filled grotto, Superman watched from the shadows as "Dolores Winters" counted the money. When the villain declared he would execute the celebrities despite the ransom, Superman moved to intercept. In the torchlight, Superman recognized the eyes of his old foe. Faced with his old enemy again, the Ultra-Humanite escaped by diving into the dark water of the grotto (Action Comics #20).

Soon after, the Ultra-Humanite read of the discover of an atomic weapon created by physicist Terry Curtis. Using the comely form of the young actress, the villain seduced  and kidnapped the scientist. After extended torture, Curtis agreed to help the Ultra-Humanite build an atomic arsenal of his own. When an airship destroys a Metropolis building, Superman follows it the criminal lair inside a volcano. In exchange for Curtis release, the Ultra-Humanite sends Supermen to steal crown jewels, expecting him to be destroyed by the guards. When Superman returns unharmed, the Ultra-Humanite unleashed a series of death traps, each of which fail. Confronted again with his ultimate foe, the Ultra-Humanite dives through an opening in the side of his lair to his apparent doom in the volcano's crater (Action Comics #21). 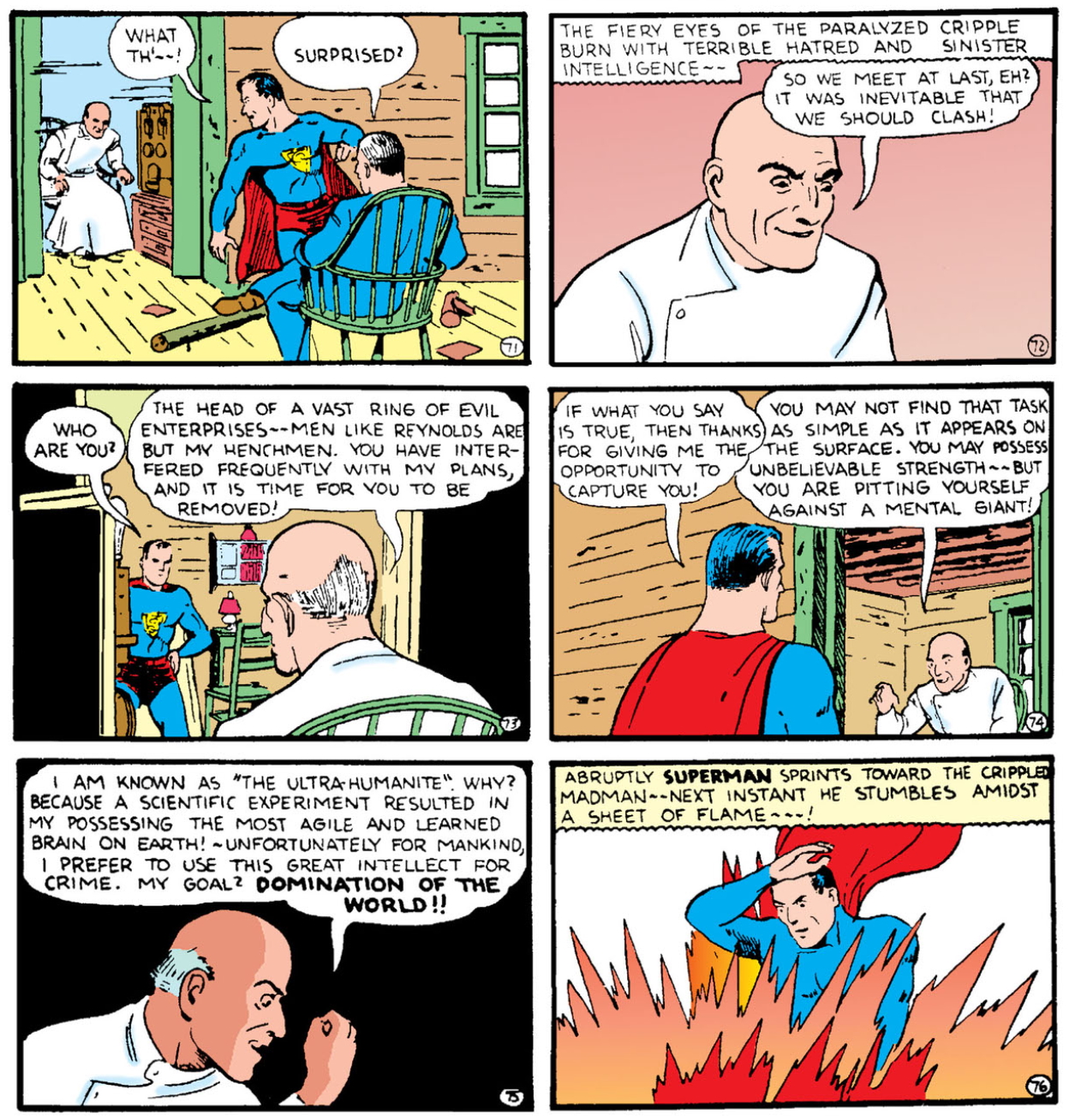 As ever, the Ultra-Humanite survived by leaping into a special heat-shielded drill device. Tunneling through the earth, the criminal made an easy escape and eventually regrouped and expanded his plans. Using advanced science, he generated super-powered henchmen, Deathbolt and the Amazing Man, to assist in his plans. Further, after discovering a dying race of subterranean creatures, he generated an army of servile drones. Finally, he set out to acquire several artifacts of power to boost his personal power level and avoid defeat at Superman's hands. These artifacts included the Powerstone recovered in Skull Valley by Superman (Action Comics #47, Superman #17), the Hammer of Thor discovered by Hawkman (All-Star Comics #3), the body of Robotman and the helm of Dr. Fate.

Again kidnapping physicist Terry Curtis, now known as Cyclotron, the Ultra-Humanite attempted to defeat the Justice Society, succeeding in capturing Robotman (All-Star Squadron #21-23). In the 1980's, the future self of the Ultra-Humanite contacted himself in 1942 and attempted to improve his chances by switching minds with his past self. His plans were defeated however, when the arrival of Infinity Inc., a second generation team of heroes from the 1980's. The Ultra-Humanite was seemingly killed when Terry Curtis attempted to destroy himself and the villain by detonating his irradiated body  (All-Star Squadron #25,26, Annual #2). The Ultra-Humanite survived, however and was revealed to have been whisked away in a temporal flux during the Crisis on Infinite Earths (All-Star Squadron #55-56).  When he re-entered the timestream is not entirely clear but it is known that it was before 1950. The Ultra-Humanite retained Winters body until the 1950's (Superman Family #201), at which point he exchanged it for a giant insect before being defeated in battle by Superman and the Golden Age Insect Queen (Superman Family #213-214).  The body he fled the insect form is unknown and his activities for next twenty years are unrecorded. 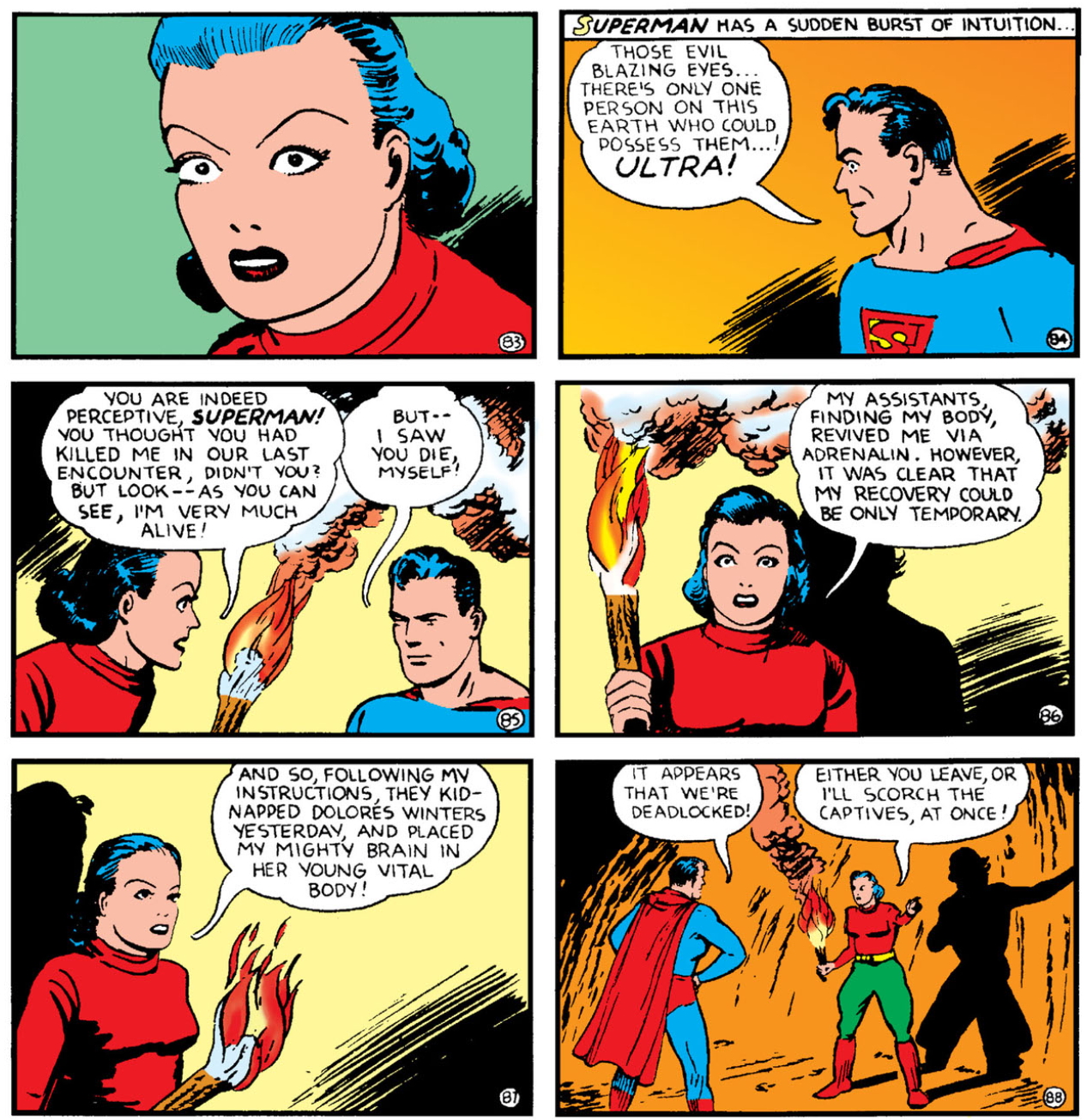 As his bodies fail him, either through age, immune rejection or damage, the Ultra-Humanite has been driven to a greater diversity of bodies. In the early 1980's,  he used his vast science to mutate an albino gorilla growing it to huge size and placing his brain within it. His first actions in this new body was to organize a new Secret Society of Super-Villains. Collecting 10 foes of individual JLA and JSA members, the Ultra-Humanite succeeded in capturing several heroes from both teams. His betrayal of his colleagues however, caused them to free the captured heroes. In the end, the Secret Society of Super-Villains was captured and disbanded (Justice League of America #195-197).

Left in Limbo after the defeat of the Secret Society, the Ultra-Humanite devised a new plan. Learning of the ancient legend of the River of Koehaha (All-Star Comics #36), the villain escaped Limbo and lured several members of the Justice Society to Colorado. Investigating a grotto, they were ambushed by the Ultra-Humanite and drowned in the river's fabled water. Koehaha, draining from the lands rich in various herbs, is oxygen rich and narcotic. "Drowning" in it results not in death, but a state of deadened conscious and an evil disposition. So affected, the JSA went on a rampage, attempting to conquer the Earth. With his enemies defeated and discredited, the Ultra-Humanite planned to assume control of the Earth. His plans were thwarted by the intervention of the remaining Justice Society members and the children, Infinity Inc. As the JSA confronted him, the Ultra-Humanite fled to Limbo only to be met by the elder Brain Wave, long time foe of the JSA. In a titanic mental struggle, the Ultra-Humanite slew the Brain Wave, albeit at the cost of much of the great apes abilities (Infinity Inc. #1-10).

As the Crisis on Infinite Earths began to unfold, he was released from Limbo and participated in that multiverse spanning event.  In a struggle with Firebrand from the 1940's and several other historic adventurers, he stole a Space Shuttle but as he made off with his theft, the shuttle was locked into a trajectory to carry him directly into the sun (All-Star Squadron #55). Whether or not he escaped, the ultimate fate of the Golden Age Ultra-Humanite remains unknown. 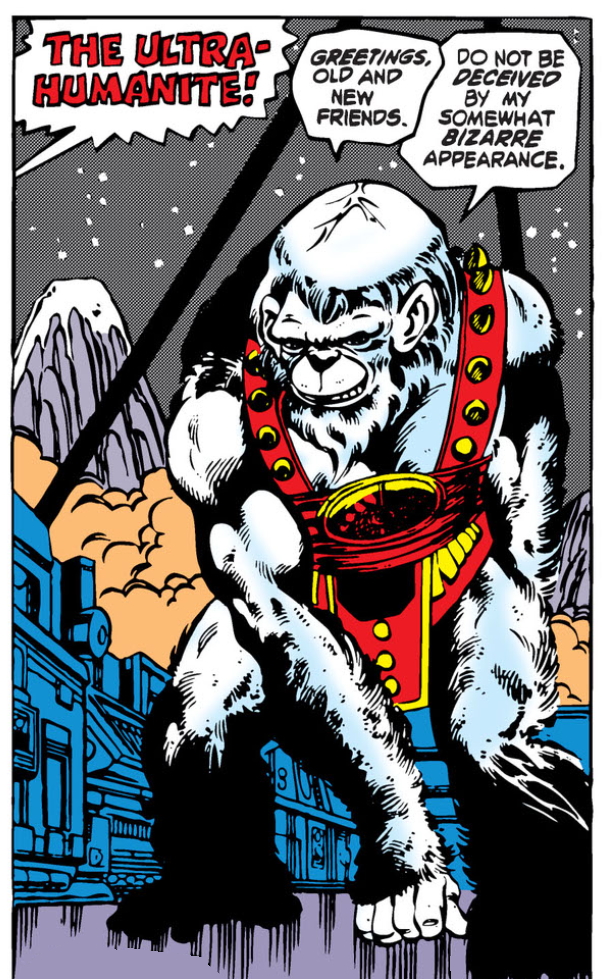 The Ultra-Humanite has a vast intellect and mental skills which he has acquired over years of self-experimentation. In the mid 20th century, he functioned primarily as a scientist with a vast array of weapons and lackeys. In 1942, he increased in personal power by fusing with the Powerstone but this was short-lived and he was returned to being a "normal" woman. In the body of the Great Ape, his mental powers were greatly amplified, those these were not evident in the mutant form he used in 1992. In addition to his body-specific powers, his brain has been altered to survive periods of disembodiment and exchange between forms. The basis of this ability is unknown.

The  Ultra-Humanite's weakness are an inherent function of his current form. In human form, he is subject to mortal weaknesses. In other forms, his limitations are unknown

Up until the Flashpoint event, the history of the Ultra-Humanite bore extensive similarities to the original Golden Age version.  Many of the original cases involving the Humanite were similar, albeit involving other Golden Age heroes than existed on Earth-Two.  For example, instead of switching for an insect body, the Ultra-Humanite transferred his mind to a large tyrannosaur, only to be defeated by the All-Star Squadron and their sidekicks, the Young All-Stars (Young All-Stars #13-14). How cases in which Superman was a central adversary played out in this timeline has never been revealed.    He remained active in the years after the Crisis on Infinite Earths, staging a series of other crimes in the body of the white ape (Infinity Inc. #45, Teen Titans #38, Starman #62) before it finally begin to fail him. 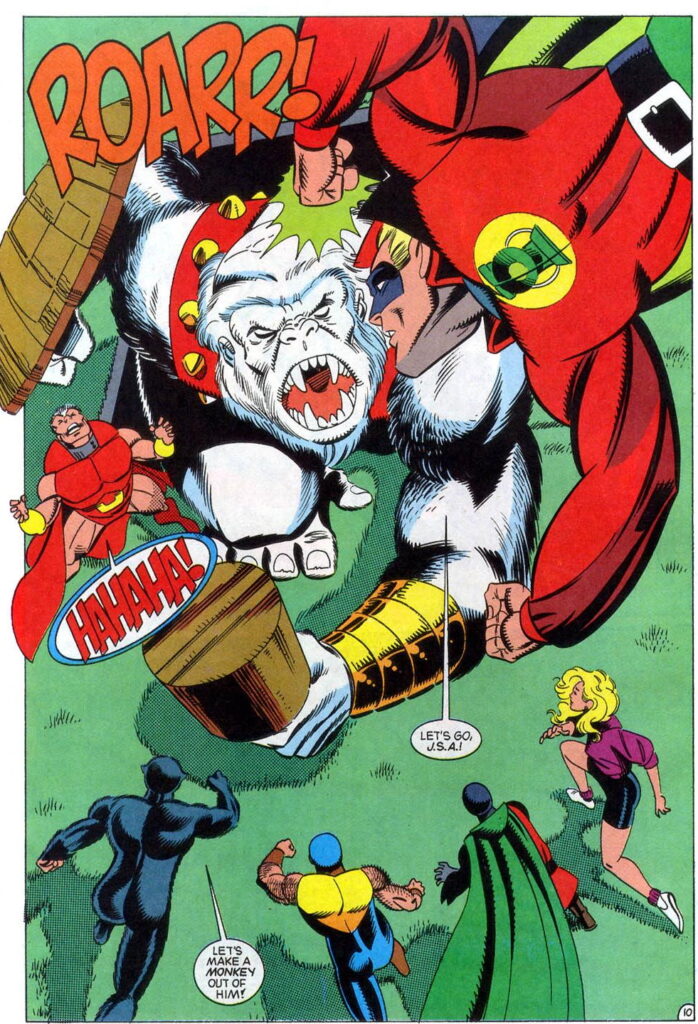 When the JSA was trapped in Limbo forestalling Ragnarok, the Ultra-Humanite abandoned the body of the great ape. Using a series of human hosts, he built a company known as Ultra-Gen. Within this company, he created a series of genetic innovations, including a new body for himself with greater abilities than before. The Ultra-Humanite was again thwarted by the Justice Society, fresh from Limbo with the aide of the Modern Age Flash (Justice Society of America #3-5).   In the final major case, before the Flashpoint event, The Ultra-Humanite managed to transfer his mind to the body of Johnny Thunder, capturing his Thunderbolt and bringing much of the world's metahuman's into his thrall before he is seemingly killed by the second Crimson Avenger (JSA #27-32).  As this version of reality, several fractures emerged, introducing conflicting or revised elements of the Ultra-Humanite's history, including alternative origin details and identifying him as Gerard Shugel, tho the accuracy of the accounts is unclear (Power Girl #11).

The Ultra-Humanite emerges as a survivor of the destruction of Earth-2 and attempts to takeover the new world with an army of young survivors, including John Grayson, son of Earth-2’s Richard Grayson.  He ultimately is tracked down by the JSA pursuing the captured children and in a battle royale, kills Batman before he in turn is killed by Hawkgirl (Earth 2: Society #16-21)

A living weapon created by the Soviets.  He was ultimately reprogrammed to serve the Superman of Earth-9 until being destroyed (Tangent: Superman's Reign #3-4).  It’s parallels to Earth-Two Ultra-Humanite are unclear. 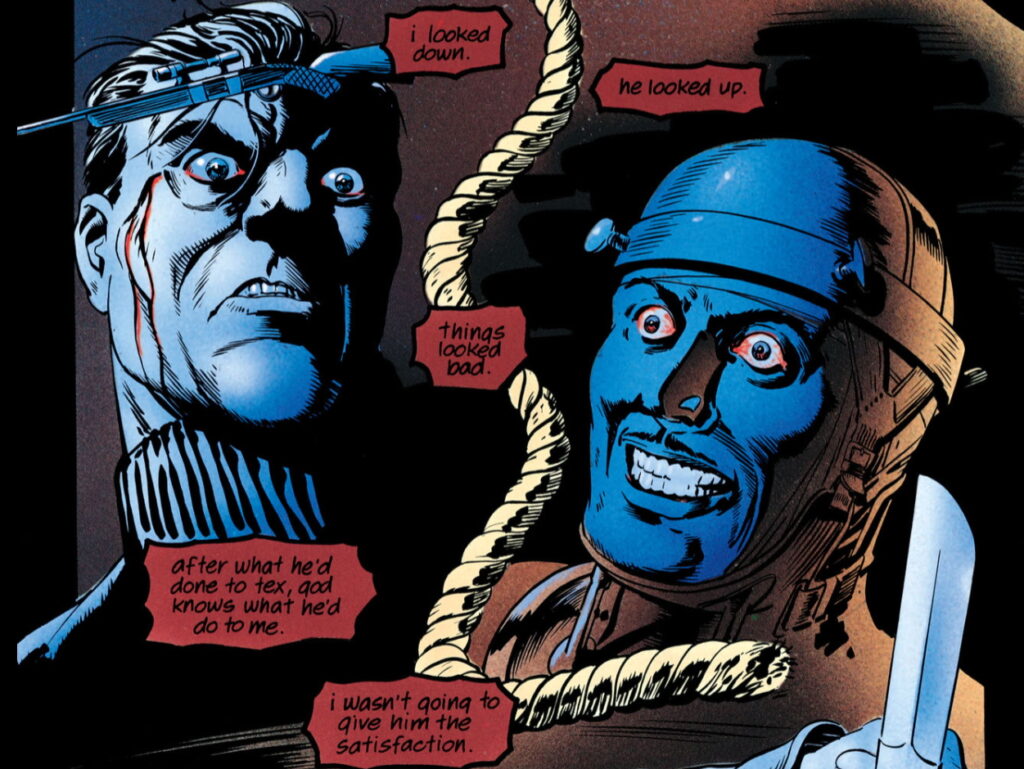 The Ultra-Humanite retreated to Nazi Germany during the latter days of WW II and captured two heroes: Dan the Dyna-Mite, partner of TNT and Tex Thompson, the Americommando.   Using his brain transfer technology, he transferred his brain to the body of Tex Thompson and abandoned the body of Delores Winters and then transferred the brain of Adolph Hitler to the body of the Dan the Dyna-Mite.  The two returned to the US as "conquering heroes", with Thompson running for Senate as part of an elaborate plan to take over the US from the inside.  A team of Golden Age heroes slowly unraveled the truth about Thompson, resulting in a dramatic show-down in Washington DC in which both villains are killed in a cataclysmic battle with former members of the All-Star Squadron. (The Golden Age LS)

The Ultra-Humanite's beginning started in 1920 when his criminal empire led him afoul of young Clark Kent and Bruce Wayne.  When the two become costumed super-heroes twenty years later, their clash with the Ultra-Humanite left him seemingly dead but in fact he had transferred his brain into the body of his apprentice Lex Luthor, from which he bedeviled the two heroes for decades (Superman and Batman: Generations I and II LSs)