Molly Mayne was born to a large Irish family in the late 1920's, the only girl of six children. An athletic girl, Molly easily outpaced her brothers and in school, routinely outshone her male peers. As a result, she was labeled a tomboy and men found her intensity too much to take. Molly was left alone as other girls fulfilled the normal roles of growing women in the 1940's. After high school, Molly tried to tone down her un-feminine image by taking a secretarial position at Gotham radio station WXYZ. There she became infatuated with the heroic image of Green Lantern and fantasized that she would appreciate a woman of strength and character. She broached the subject to her supervisor, broadcaster Alan Scott, when the radio station hit on the idea of a radio show with a Green Lantern serial. Scott dismissed the idea and suggested that Green Lantern only had attention to devote to criminals.

As part of the radio serial, the station came up with a recurring villain known as The Harlequin who would taunt Green Lantern each week. Seeing the need to attract Green Lantern's attention and gifted with a natural athletic prowess, Mayne developed a costume and took to the Gotham rooftops as the Harlequin. Obtaining a pair of special glasses and a flying car from a secret source, she approached the Gotham criminal establishment and attempted to form her own gang. After the recent arrest of Kid Killem, his gang was known to be leaderless and the Harlequin seized the opportunity to make her grand entrance. After an initial melee with the gang, she convinced them of her ability to lead. Her takeover was interrupted by the sudden arrival of Green Lantern. As the gang watched, the Harlequin bested the astonished hero, pushing him out an open window where his descent was stopped only by a flagpole. While the gang recovered, she quickly lowered the hero to the ground and made her getaway.

The next day, while Green Lantern made his radio debut, the Harlequin and her gang made a daring bank robbery. Breaking away from the station, Green Lantern intercepted the gang and in a battle broadcast to thousands, was captured and taken to the Harlequin's hideaway. After making the hero comfortable (though bound), the Harlequin thought of her next crime. She was horrified when one of her gang informed her he had already arranged a distraction: a bomb in Lentil's Department store. Rather than allow hundreds to perish, the Harlequin assaulted her own gang only to be captured herself. As the villains made off with their captive former leader, Green Lantern surreptitiously used his power ring to switch places with her and attacked the crooks as the sped along a New York highway. The Harlequin meanwhile made her way to Lentil's to defuse the bomb. Arriving too late to help, Green Lantern hurriedly evacuated the building just before the store exploded, leaving the Harlequin supposedly dead among the rubble. Though a search turned up nothing, the world assumed it had seen the last of the Green Lantern's first female adversary (All-American Comics #89). 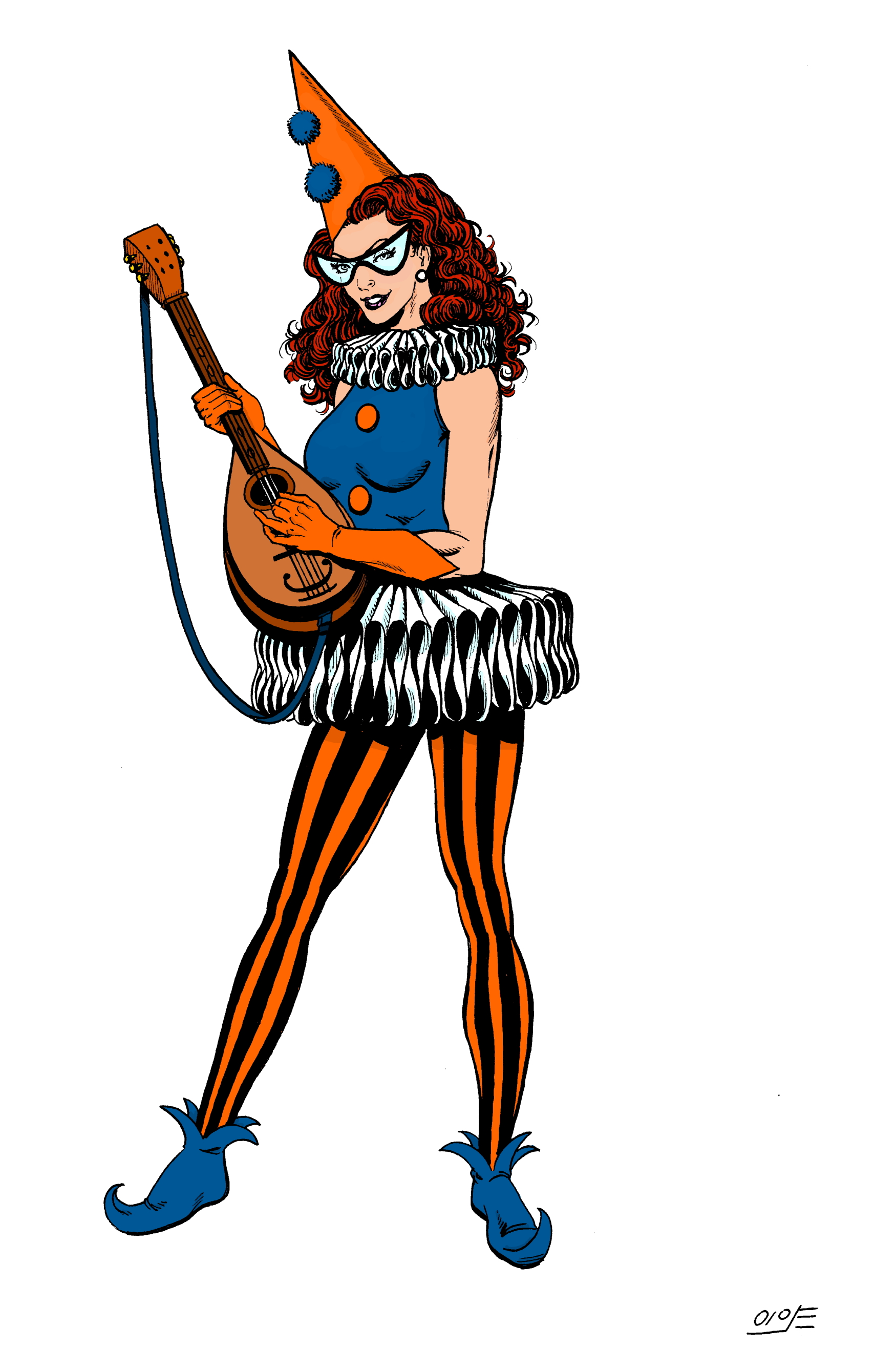 The Harlequin was not dead as Molly Mayne quietly re-appeared at WXYZ. Over the next two years, the Harlequin's clashes with the Green Lantern became a common source of news in Gotham City. The Harlequin's crime were restricted to simple robberies and she went through a series of gangs, each group ending up in jail (All-American #91,93,95, Green Lantern #29). In several cases, when her co-horts attempted to kill Green Lantern, the Harlequin intervened, usually resulting in the capture of herself along with her gang. In late 1947, this tactic reached it's peak when she was recruited by the Injustice Society of the World. When the villainous gang launched an assault on the Justice Society, the Harlequin betrayed them, only to be left for dead by the retreating villains. When Black Canary arrived late for a meeting, she found the dazed criminal and together they arranged to undo the Injustice Society. After a cross-country jaunt in pursuit of the villains, the Justice Society emerged victorious and the Harlequin slipped away unseen (All-Star Comics #41).

As time went on, it became increasingly evident that the Harlequin was hardly a criminal at all. Some criminals added Gotham's so-called crime queen to their hit lists, seeing her as much of an obstacle as the Green Lantern (Green Lantern #31). In late 1948, Green Lantern learned the exact nature of her criminal career. While in pursuit of a criminal gang head by an mysterious criminal known as the Wraith. As he and Doiby rounded up a gang of the Wraith's lieutenants, one slipped free and fled into the alleys of Gotham. As Green Lantern caught up with him, he was tripped by the Harlequin who helped the gangster escape. The two didn't get far however as Green Lantern cut off their escape route and subdued the gangster. Leaving the felon with Doiby to await the police, Green Lantern took the Harlequin to jail personally. While the femme fatale was being booked, Green Lantern was called into the office of the chief. There he met with an agent from the FBI who wanted him to co-operate with a covert operative known as H-9. The hero eagerly agreed but was stunned to learn that agent H-9 was in fact the Harlequin. The Harlequin had been an agent of the FBI for some time, allowing for her repeated escapes from prison. Together, the two vowed to capture the Wraith but whether they ever did was remains unknown (Green Lantern #34).

Afterwards, the Harlequin and Green Lantern crossed paths less frequently. In early 1949, following the capture of the Injustice Society, the Harlequin's service with the FBI led her into conflict with the Sportsmaster, who was in turn was in pursuit of her, to punish her for her betrayal. The case eventually crossed paths with Superman and Green Lantern who brought the Sportsmaster to justice. Superman was enlightened as to the Harlequin's true mission and she was set free (Superman Family #206). 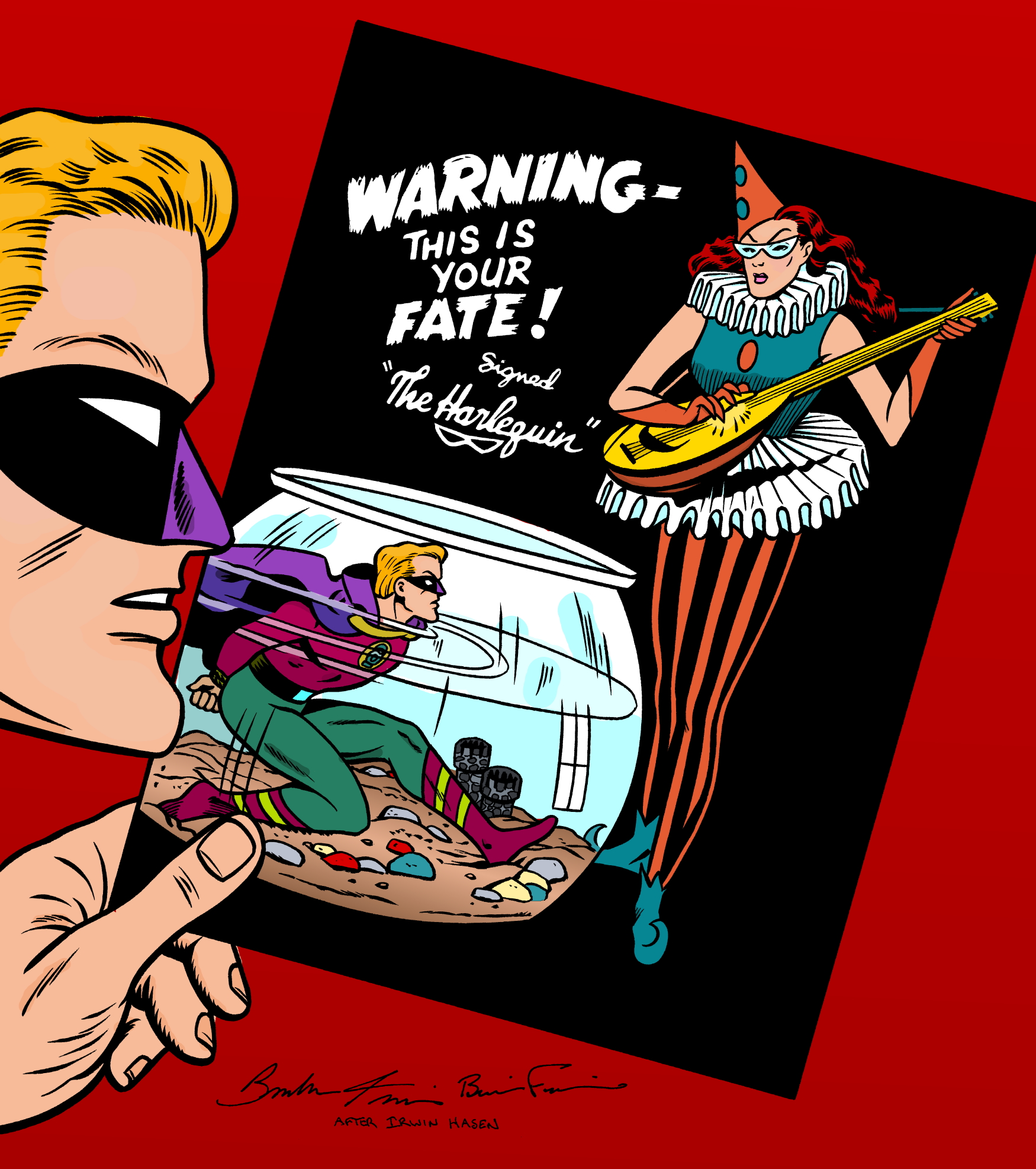 The affairs of Molly Mayne between 1949 and early 1980's are unknown, although at some point she had been working in pursuit of the Thorn (revealed in Infinity Inc. Annual #1) . Whether she married, had children or what he eventual status was with FBI was all have yet to be revealed. By 1980, Mayne was living in Los Angeles where she had established herself as a business manager of considerable skill. When Infinity Inc., whose membership included the Thorn children by Alan Scott, Mayne resumed her guise as the Harlequin (Infinity Inc. #12). Now in her late 50's, Mayne was still in excellent shape. She hid her age with illusion casting glasses. In her secret identity as Mayne, she contacted Alan Scott for a job as a his administrator when he re-entered the broadcasting business in Los Angeles (Infinity Inc. Annual #1).

Scott's other motive for moving to Los Angeles was to investigate the mystery of his supposed children, Jade and Obsidian. Mayne had taken an interest in this as well and when the Thorn returned, she resumed her guise as the Harlequin to protect Scott's children from their psychotic mother. In the course of this, not only did Alan Scott learn of his true relationship with the junior heroes, he also learned who Molly Mayne truly was. After over 30 years, Mayne explained to Scott her identity as the Harlequin and why she had taken it. In a whirlwind decision, the two were married and the Harlequin retired as Molly Mayne-Scott (Infinity Inc. Annual #1). Her final fate on Earth-Two is unknown. 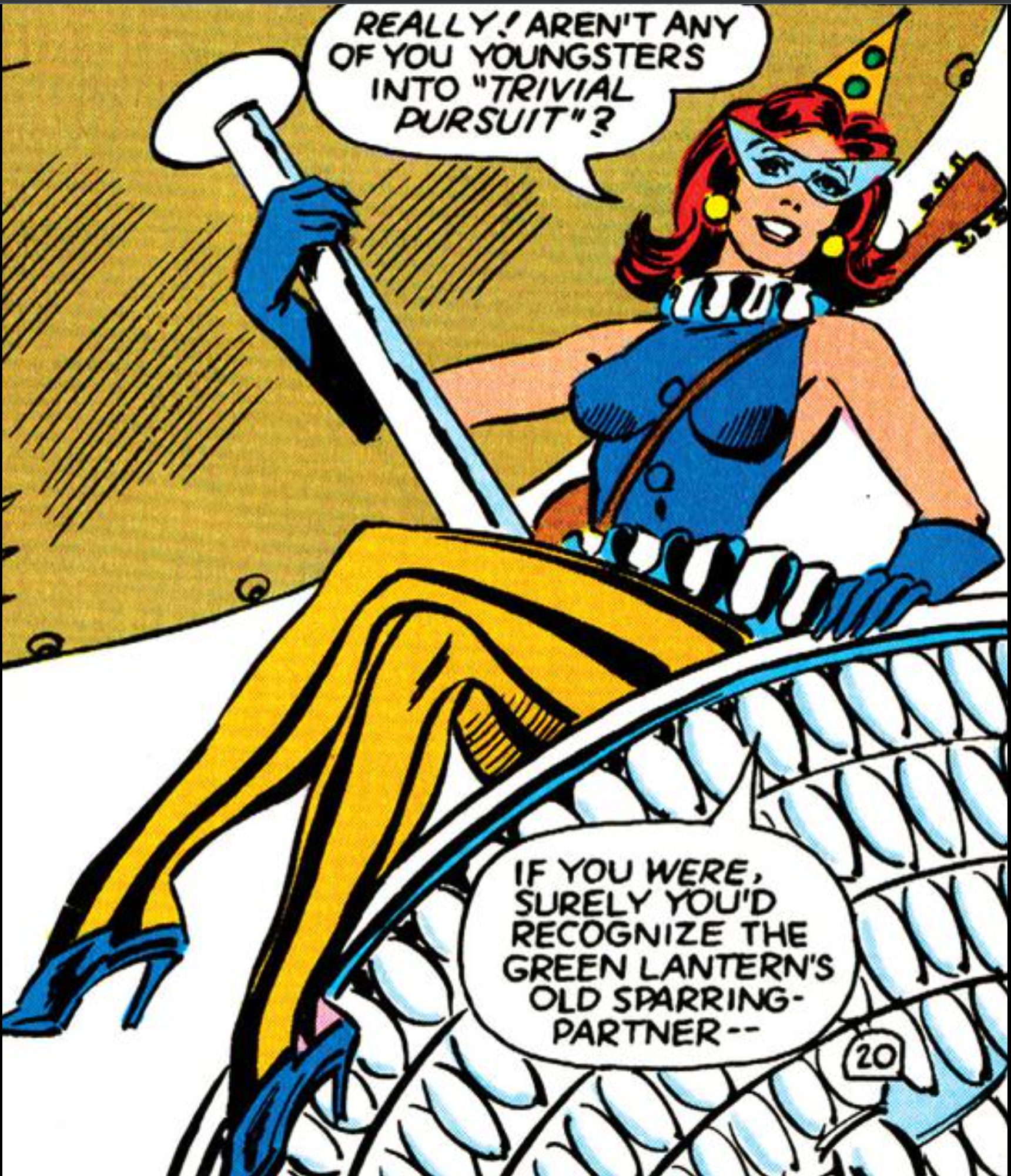 The Harlequin's abilities stem from a pair of spectacles rumored to be constructed by the alien technology of the Manhunter cult. These spectacles projected realistic illusions of a variety of types and were also rigged to give anyone but Mayne a strong electrical shock if they were touched. In addition to her technology, Mayne was an Olympic level athlete and carried a heavy wooden mandolin that she used as a club.

Without her technology, Mayne is simply human and can be injured as such.

The Harlequin of this timeline is thought to have a history largely similar to her Earth-Two counterpart. In late 1949,  she and the Green Lantern crossed paths again in the pursuit of communist agents. After their capture, she and the hero had a final confrontation. By this point, Mayne had become frustrated with Green Lantern's lack of pursuit and had determined that he was her employer, Alan Scott. After one last veiled appeal, the Harlequin walked away and was not seen again in public life for over 30 years (Green Lantern 80-Page Giant #1). Whether these events transpired in the Earth-Two timeline is unclear.

In this timeline,  as quickly as she become a bride, Mayne had seemingly become a widow (Infinity Inc. #30). She did receive a brief glimmer of hope however, when several visiting Green Lantern's used Alan Scott's power battery to contact him in Limbo, allowing Molly to know that while he was gone, he was not dead in any irrevocable sense of the word (Green Lantern vol. 3 #19).  When the JSA was released from Limbo, Alan and Molly were reunited (Green Lantern Corps Quarterly #1).

Shortly after his return from Limbo, Scott was altered by the Starheart, recovering his youth while Molly remaining aged (Green Lantern Corps Quarterly #6-7). Concerned about their physical differences, Molly sold her soul to Neron in exchange for her youth (Underworld Unleashed: The Abyss).  Alan Scott, now the Sentinel, recovered Molly's soul and reunited it with her body (Green Lantern vol. 3 #71). From that point, Scott attempted to reassure his elderly wife that their differences in age were not important. This issue has become moot when Scott returned to more his normal age (Green Lantern vol. 3 #110). Her final fate is this timeline is unrevealed.

An version of the Harlequin has been witnessed in this timeline but their history is essentially unknown (The Golden Age LS).