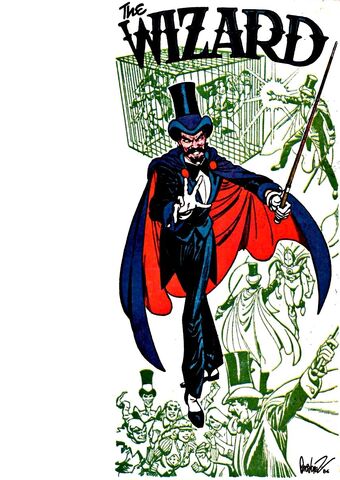 William I. Zard (possibly not his real name) was probably born in the early 1910's. Zard grew up hard and became a petty criminal at an early age. He worked as a gun man for several organized crime figures, an occupation that often landed him in jail. By the late 1930's, Zard felt a failure, unable to master even mediocre crimes. Alone in jail one evening, Zard had a flash of revelation. He became convinced that crime was like a business and success would be achieved by conducting that business is the truest sense of the word. Organization, planning, and getting the advantage over the competition was key.

After being paroled, Zard left the States and moved to Tibet, where he passed himself off as a supplicant to the mystic arts. Under a Master Lama, Zard learned a variety of magicks, including a mastery of illusions. Upon the completion of his studies, Zard planned to return to the States to renew his life of crime. His first act was to slay his faithful teacher, the Master Lama. Arriving in the States in the mid-1940s, Zard's master plan was to craft a nom du crime, the Wizard,  and pull off the crime of his life: joining the Justice Society. So hardened a criminal was Zard that he could not fathom that the JSA actually worked for justice and assumed that they were simply an elite band of criminals staging a ruse for the authorities. He staged a series of crimes to demonstrate his worthiness but after all of his schemes had been thwarted, Zard was aghast to learn that his opponents really did work toward a society without crime. Cornered by the heroes, the Wizard leaped into a vat of acid, apparently to his death (All-Star Comics #34).

However, one of the illusions that the Wizard learned best was to fake his own demise. Dumbstruck by his experience with the JSA, the Wizard reasoned that it was best to fight fire with fire. He helped organize a group of the JSA's adversaries including Degaton, Vandal Savage, the Gambler, The Thinker and the Brain Wave into a force called the Injustice Society. Together the group managed to take over key portions of the United States Government until they were fouled by the Justice Society. To add insult to injury, the Wizards escape was tripped up by a youth group, the Junior JSA, and he was unceremoniously carted off to jail (All-Star Comics #37).

No prison has held the Wizard for long and upon his escape, he determined that the Injustice Society must live again. This time he took a different tact and used career criminals with few dreams of empire. He recruited the Icicle, the Fiddler, the Sportsmaster, the Huntress, and the Harlequin. Together the new team managed to capture most of the Justice Society but the Wizards plans were undone by the tactical error of  including the Harlequin. Not a true criminal, the Harlequin betrayed the Injustice Society to aide her in winning the love of Green Lantern and the JSA quickly rounded up the criminals and returned them to prison (All-Star Comics #41).

In the late 1940's, the Wizard was contacted by Colonel Future, a Superman foe bedeviled by the Man of Steel's increased presence at home since the war ended. Deciding to try magic where science failed, the Wizard and Colonel Future determined to cast a spell that simply eradicated the Man of Steel from existence. As the Wizard cast the spell, it did not have quite the effect he had intended. Instead of erasing his existence, it simply caused reporter Clark Kent to forget that he was Superman. For a year, however, it did seem that Superman had ceased to exist. To Future's dismay, the battle against him was picked up by aggressive journalist Clark Kent, leading police raids and using his position in the journalism industry to attack crime in ways he never had before. By this point, the Wizard and Colonel Future had had a falling out and the Wizard was reduced to destitution. Kent married fellow reporter Lois Lane and on their honeymoon, the new Mrs. Kent made the shocking discovery that her husband was invulnerable, confirming her suspicions that she was indeed married to Superman. Lois Kent sought out the Wizard, a vagrant in a Metropolis city park. She convinced him that he could restore his name to prominence if he proved that it was he that had banished the Man of Steel. The only way he could do that, was to bring Superman back. In a public ceremony arranged by the Daily Star, the Wizard methodically undid his incantations from a year before and from an Superman insignia on the ground the Man of Steel burst forth, collaring the wily Wizard. The Earth's foremost super-hero was restored to land of the living and the Wizard was restored to jail (Action #484).

The Wizard's activities during the 1950's are largely a mystery. It is likely that he either spent them in jail or traveled widely to hone his particular brand of magic. When the JSA re-formed in the early 1960's, the Wizard renewed his life of crime in earnest. For most of the following 20 years, the Wizard rarely worked alone. In 1963, he joined fellow Injustice Society members The Fiddler and the Icicle in a group known as the Crime Champions which also featured villains from Earth-1. The group bedeviled the Justice League of America and Justice Society of America on two worlds before finally being captured (Justice League of America #21).

The most recent defeat led to a crisis in confidence for the Injustice Society. The villains became convinced that they, due to age and psychology, had become so accustomed to losing to the JSA that it was all they knew. To revitalize their efforts required fresh blood, young villains with whom the Justice Society was unfamiliar to give them the edge they needed. It as decided that a member of the Society, namely the Wizard, would go to Earth-1 and recruit new allies in the war for crime. With the aide of the Fiddler, the Wizard was vibrated out of the Earth-2 dimension and into that of Earth-1. (Secret Society of Super-Villains #12).

The task the "mysterious benefactor" laid out for the Secret Society was to acquire several artifacts known as The Sorcerer's Treasures first encountered by Superman and Batman (World's Finest #103). These artifacts, including a power glove, mystic gem and cloak of invisibility, would then be used to allow the benefactor to reveal himself. After tracking down the three treasures (and losing the fourth, a Dragon Box), the Secret Society turned the treasures over to Flashman, who left them in a airport locker for the benefactor. Unbeknownst to the Secret Society, the Creeper had trailed Funky and waited patiently to nab the Society's secret leader. The Creeper was astonished when the man picking up the artifacts was none other than the Wizard (Secret Society of Super-Villains #8-10).

The Wizard was booked and jailed but soon escaped. Reacquiring the artifacts through theft, he barged  into Secret Society headquarters and disposed of Flashman by teleporting him to the East Coast. He then announced his intentions to take leadership of the Secret Society and lead them back to Earth-2 to defeat the Justice Society of America once and for all. After an erroneous excursion to Earth-3, the villains arrived on Earth-2 and set the Wizard's plan into motion. This plan was to systematically attack and eliminate the weaker members of the JSA, then liberate his colleagues and attack the powerful members en masse as they lacked reinforcement. The plan met with some initial success as the Secret Society captured the Atom, Dr. Mid-Nite and Mr. Terrific (Secret Society of Super-Villains #11-15, Canceled Comics Cavalcade #2). The disappearance of their colleagues however soon alerted the JSA to the plan and the Secret Society was forced to flee to Limbo to avoid capture (revealed in Justice League of America #166).

The villains time in Limbo was brief but not without consequences. When they emerged on Earth-1 some months later, they found the link between their bodies and the souls had weakened. To strengthen themselves, they needed new bodies and selected the Justice League members as ideal targets. Attracting the attention of the JLA to a archeological dig in Egypt, the Secret Society ambushed the heroes and switched bodies with them. The Wizard happily took the body of Superman, giving the mage power he had never known. As the villains plotted to use their new bodies to dispose of the remaining Justice Leaguers, the heroes deduced their plans and captured their possessed comrades. The Wizard and the rest of the Secret Society were returned to their own bodied and sentenced to lengthy prison terms (Justice League of America #166-168). The Wizard eventually escaped prison and took up crime again with his old colleagues in the Crime Champions but were again defeat by the combined might of the Justice League and Justice Society (Justice League of America #219-220).  The fate of William Zard of Earth-2 after Crisis is unrevealed.

Prior Earth/Earth-0  =  In the timeline the most since Crisis, The Wizard  formed a new group in the mid-1980's to battle the Justice Society's heirs known as Infinity Inc. Unable to resist an opportunity, the Wizard moved to Canada and organized some former colleagues (Fiddler and the Shade) and some new ones (Icicle II, Artemis and Hazard) into Injustice Unlimited as a villainous counterpoint. After a globe-trotting ruckus between the criminals and the combined might of Infinity Inc. and the Global Guardians, the Wizard seemingly stood triumphant. Fearing that he might actually kill one of the heroes, the second generation Hourman grabbed a giant hand from a clock tower and seemingly impaled the Wizard, killing him instantly (Infinity Inc. #34-36).  However, as before, the Wizard has learned to fake his death. Using some newer magics he attempts to again transport himself to Limbo but instead ended up in the land of Faeries, a magical realm inhabited by characters from Fairy Tales. There, he learned newer magics still and also regained a portion of his youth. Fortified from this experience, he again  launched an attack on Earth but was thwarted by Infinity Inc. (Infinity Inc. #50) much as their forebears had thwarted a similar invasion years before (All-Star Comics #38). He recently emerged with a new appearance as part of group of magically inclined super-villains. This group seeks to gather mystic artifacts for an unknown purpose soon to be revealed (DCU Villains Secret Files #1).  The Wizard also formed yet another incarnation of the Injustice Society in recent years (JSA Classified #5-7, JSA All-Stars #2-5)and teamed-up with Amos Fortune and The Gambler (JSA Classified #14-16).

New Earth/Earth-0  =  In the current continuity of core earth, the Wizard has not emerged.


Back to GA Villain Checklist