The origins of the man known as The Shade on Earth-2 are shrouded in mystery.  His first recorded activities occurred in Keystone City in late summer of 1942 when he used a device that altered the dust content of the air in a manner that plunged the city into utter darkness.  With the city disoriented by blackness, the Shade and his gang kidnapped the entire Central City Police Force, leaving the city largely unprotected.  Jay Garrick, the Flash, was caught up in the darkness and sprinted across the city in search of a cause.  He discovered the police stations of the city and looters ransacking the city for every dollar they could find and also discovered that clumps of dust seemed to pierce the darkness.  Consulting an old mentor, he deduced that something had removed dust from the air that normally reflects sunlight and thus produced the darkness.  Using his fantastic speed, he created large dust devils to flood the city and restore the light.  By this point, the Shade had made a getaway with his device and large sums of cash.  Resolving to cap off his riches with an extensive collection of jewelry, the Shade used his device to target the home of Damask Darling, a notable debutante holding her public coming-out that evening. Cloaking the house in blackness in which he could relieve the wealthy attendees of their belongings.  Tipped off by one of his minions, the Flash intercepted the Shade and reversed his device, clearing the darkness and making short work of the Shade, who was unceremoniously carted off to prison (Flash Comics #33). 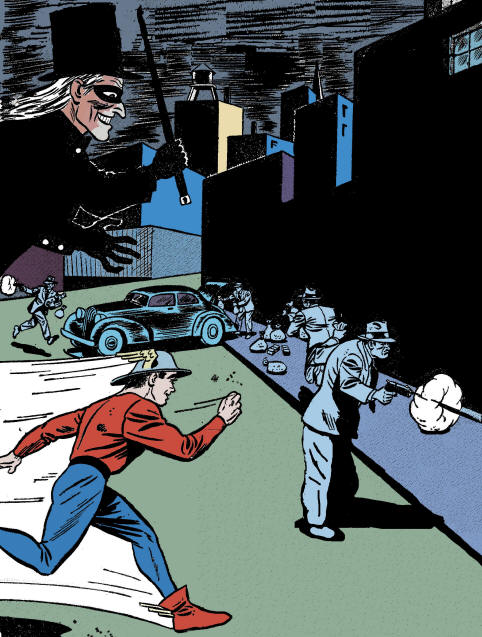 The activities of the Shade on Earth-2 are undocumented for the next two decades until he reappeared in Keystone city in the company of two other members of the Flash's Rogues Gallery, the Fiddler and the Thinker.  The trio plotted a series of crimes to spite their old nemesis, the Shade choosing a brazen theft along Keystone's riverfront.  The villains encountered an unexpected wrinkle in their plans when the Flash of Earth-1 accidently vibrated into the Earth-2 dimension and recognizing his environs from his comic book collection of his youth.  Seeking out Jay Garrick, the two Flashes promptly tracked the rogues back to their lair and after a pitched battle, arrested all of them (The Flash #123).   Four years later, The Shade was paroled for good behavior and began quietly stalking the Flash on his visits to Earth-1, using his cane to measure the vibratory frequency to Earth-1.  He then used his access to what he called "The Dark Dimension" to raid Earth-1 from hiding, using shadow forms that were either constructs or denizens of the Dark Dimension.  The Flash of Earth-1 recognized the shadowy shapes as the likely work of the Shade and traveled to Earth-2 to recruit Jay Garrick.  Together the two Flashes unraveled his schemes and sent the Shade to prison on Earth-1 (The Flash #151)

During the 1970's, the Shade become a highly active member of the Injustice Society. In 1975, he was part of a large team organized by the Wizard what encountered a multiversial incursion from Earth-Prime when a comic book writer named Cary Bates acquired super-powers and malevolent intent when he inadverntantly crossed over to Earth-2.  Backed up by his abilities, the Injustice Society scored some initial victories but were ultimately undone when he was returned to Earth-Prime and they were confronted by the combined might of thr Justice League and Justice Society (JLA #123-124).  The following year he joined a group of villains from Earth-1, 2 and S under the direction of the barbarian conqueror King Kull from Earth-S.  He joined Dr. Light from Earth-2 in a series of crimes using satellites to affect the planet's illumination until they were thwarted by the Hawkman and Hawkgirl of Earth-1 and Bulletman and Bulletgirl of Earth-S (JLA #135-137).  At the end of the decade, he joined an Injustice Society venture with the Fiddler and the Icicle that was interrupted by the agents of Apokolips needing the unique combination of their abilities to resurrect Darkseid.  While the three villains executed their tasks as expected, the resurrected Lord of Apokolips nonetheless blamed them for subduing his son Orion and imprisoned them in the bowels of Apokolips for the effrontery. There were liberated by Batman and Mr. Miracle, who need them to reverse the conditions that led to Darkseid's resurrection.  They were presumably returned to prison on Earth-2 afterwards (JLA #183-185).

In the early 1980's, The Shade again crossed the dimensional barrier to Earth-1 when the actions of Roy G. Bivolo, the Rainbow Raider, shunted the color out of Central City into the dimension of Earth-1 causing a "pale-out" there while Keystone was drenched in uncontrollable colors that thwarted the Shade's ability to manipulate darkness.  He staged a series of crimes to attract the attention of the Earth-1 Flash and the two formed an uneasy alliance to discover the origins of their respective disruptions.  As the battle with the Rainbow Raider neared it's climax, the Shade cloaked the Flash in a shield of darkness and quietly slipped back into the Dark Dimension (The Flash #298-299).  The Shade was not seen during the Crisis on Infinite Earths and it is unknown whether he participated unseen or had retreated to the Dark Dimension til it was over.  His current activities are unknown.

Prior Earth-1 = Earth-1 had no counterpart for the Shade, though the Earth-2 version made periodic forays into that dimension.

Prior Earth-0 = In the merged world that emerged in the wake of Crisis, the Shade was more powerful and more nuanced in his history.  While still an established adversary of the Golden Age Flash and member of the Injustice Society (Infinity Inc, #35-36), he largely retired from active life of crime thereafter and pursued a series of different objectives from his preferred base of Opal City, home of Starman (Starman #0).  It was revealed that this version of the Shade is essentially immortal, the result of being connected to the Shadowlands during an extradimensional event in 19th century London where he lived as Richard "Dickie" Swift.   With his memories lost after the event, he traveled the world as an amoral adventurer ultimately settling in America (The Shade Vol. 1#1-4).  He engaged in a long-running battle with a family of generational psychopaths called the Ludlows and encountered another individual with the connection to the Shadowlands, a dwarf named Simon Culp.  Culp and the Shade became mortal enemies and while the two were struggling in a battle in the early 1940's, a bomb explosion fused Culp into the Shade's body and allowed him to manipulate the Shade's persona whenever Swift was fatigued.  It has been suggested that the criminal activities attributed the Shade were more the Culp persona rather than that of Richard Swift (The Shade #1-4).  Toward the end of the millennium, the struggle between Swift and Culp intensified until an Culp recruited an extremely powerful shadow form to capture Opal in a bubble of darkness and separate himself from the Shade, taking his powers with him. When Culp was eventually killed by the Mist, the Shade became a much more benign individual and began a relationship with detective Hope O'Dare (Starman #61-73). He still retains a connection to the Shadow lands though the extent of its power in his current form is unknown (Starman #82).

Current Earth-0 =  The Shade exists in this world and remains in a relationship with Hope O'Dare but the back-story of each individual is different as many of the individuals involved in their respective histories no longer exist (The Shade Vol. 2 #1-12).  He recently required the assistance of the Flash to rescue his lover in the Shadowlands and appears to remain of a largely non-criminal bent (The Flash Vol. 5 #10-12)

Earth-11 = A female version of the Shade is known to exist on the gender-switched world of Earth-11 and was killed in the Arena realm created by Monarch.  Given the reality shifts that occurred with Monarch's defeat, it is not clear whether these events are still part of any timeline (Countdown: Arena #1).

Earth-12 = The Shade of this Earth was also a foe of the flash, with his costume and cane on display at the Flash Museum in distant future.  His Erebus Cane is included and used by the villain Mindslide when he attacks the Justice League at the Museum.  Nothing more of this Earth's Shade is known (Justice League Beyond #19-20).

The abilities of the Shade are not entirely clear.  Through most of his history on Earth-2, he has relied on implements to manifest his shadows - a large machine in his initial appearances and a cane of increasing power later on.  In contrast, he has a unique connection with a shadow realm of which is often referred to as "Lord" and that there may even be more than one of these realms. In his last recorded case, he was seen operating the cane remotely from the Dark Dimension suggesting that his ability to manipulate darkness was more inherent to him.  Thus The Shade's powers appear to have evolved over time, possibly with continued exposure to the Dark Dimension and he may be decreasingly reliant on his accessories.

Certainly at the beginning of his career, the Shade appeared extremely dependent on devices to channel dark energies and he could be easily defeated without them.  In the latter part of the 20th century, he had condensed his need to his Erebus Cane and separation from it caused him to lose his ability to defend himself.  What his limits currently are are unknown, though given the more potent range of the abilities of his Earth-0 counterpart, they could be greater yet.

Back to GA Villain Checklist